Stigmata the Ultimate DIY Publishing / The Stigmata of Language: 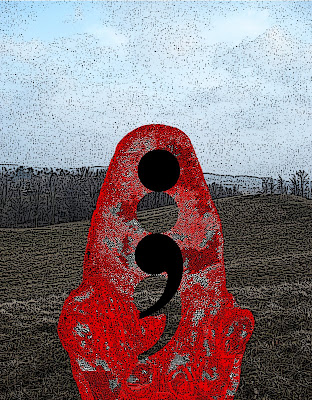 What fascinates me about stigmata is that they are an external representation of an internal state. A bodily representation, a representation in the physical of something non-physical, of ideation. The mind writing on the page of the body.

I’m also intrigued by the notion that the thing represented (the wounds of Christ) are human constructs. But people don’t get Elvis stigmata, even if the passion of devotion is almost religious in scale.

One could get semi-colon stigmata. Semi-colons are a human construct, represented in the mind. And the mind, stigmata tell us, can write on the flesh. And what are the wounds of Christ if not punctuation marks par excellence?

My personal choice of stigmata would be ellipses…

Could one go to a writer’s workshop and learn how to create stigmata on one’s own body? Could one have a series of different stigmata which change over time, like a movie in slow motion, or the pages of a book? Could one buy stigmata hypnotic suggestion tapes to listen to in a darkened room: the wind, gentle rain, and the suggestion of stigmata? Could one have stigmata in the wrong place, or “umm…that was supposed to be a nail hole but it came out looking like a heart…”?

Tattoos seem to me like stigmata that come not from the unconscious or the subconscious but from the conscious mind. And surely, stigmata do originate in the subterranean regions of the self?

Whenever I accidently stumble on something to write, I get the feeling that poems are the stigmata of language.

This in response to Chris Piuma's comment on my last post. Missing a date because of stigmata. That never happened between me and the saints. That ranks up there with my mother-in-law's secretary calling in to say that she couldn't make it in to work because she, a nudist, had sunburned her genitals. Perhaps she could have lied and said she had the flu.