Mistranslating from the Danish in Early Morning Pajamas

there should be a stadium

where we may stand together

our hair sticking up for

what we all believe in

the distant bells for instance

For some reason, I couldn’t sleep tonight. Perhaps I had one too many coffees too late into the evening. It used to be that I could drink coffee all night and it didn’t affect me. I think that this is one more change that I can attribute to ‘middle age.’ I’m not so good at flying off buildings anymore either. At least, not without my extra powerful cape.

I did a lovely little poetry workshop at the Burlington Public Library for three great teens last evening. I was expecting more kids, but unfortunately the BPL did another lousy job of advertising & describing the workshop. They did this a couple weeks ago for a reading that I did there with Paul Vermeersch and Souvankham Thammavongsa. Again, a small but wonderful audience. The kids were marvellous. Talented, droll, flexible yet willing to ask questions. One girl was willing to tell me what she was really thinking and not just accept what I said. I was really happy that I was able to win her over and convince her to try things outside of her comfort zone. There were two Grade 7s and one Grade 11. An interesting mix but it worked. The hour-and-a-half passed really quickly.

I got up last night at about 4 after tossing and turning. I had the idea for a poem:

There is a careful sign on their rumpled double bed.

“We have gone into the hills.”

His mother’s mauve skirt catching on a nettle.

But didn’t get very far with it, though it went into some interesting territory. I remembered when I used to expect to always write two or three lousy poems in a session before I got to ‘a keeper.’ I’d forgotten that. It’s good advice for myself. When I’m not writing absolutely regularly, and my days are filled with other concerns, it’s easy to try too hard when I begin.

I was reading a bit before I got up, using the old shirt-over-the-lampshade -so-as-not-to-wake-my-wife trick. She woke up anyway, so I got up. What I was reading was Matthew Zapruder’s great The Pajamaist. I’d love to quote the ending of the opening poem “Dream Job,” except that it needs the rest of the poem as set up. It’s hard to quote specific lines because they work better in context. (“How could you know/mosquitoes love my blood/because it’s full/of something they love”) Check it out, though.

After my first failed poem attempt, I someone settled on trying a sound translation from a Danish translation of Proverbs that I mined from BibleGateway.com. I was just playing around, seeing what I could come up with without, excuse the expression, gating myself too much. I’ve been working on editing my forthcoming Coach House poetry book and some of the words of my editor are weighing too much on me, shutting me down somewhat.

I ‘translated’ about three quarters of the Proverb, and then extracted the little bit that I’ve stuck at the top of this post. Not exactly biblical, but quite nice. Sometimes, even a little poem seems to make being up most of the night of value. It’s been a while since I’ve been unable to sleep due to no particular feeling of anxiety or worry. It's been I while since I felt that strange altered out-of-time half un-focused / half very focused feeling that it brings.

There is a sign on their rumpled double bed.

“We have gone into the hills.”

His mother’s mauve skirt catching on a nettle.

Finally they sought the hut of the little rain

the misty paddock where they met and became

if we knew the pink arms

that the sun would shine h

the glass dolls w b in the ferns

the lambs never far from their own wool

pushing us along the road to our shells

h and m holding the thrush

our hands soft crabs thrust into the river to pray

the dark masks of the leaves

rob the trees of their small change

bumpHEAD at the Pearl 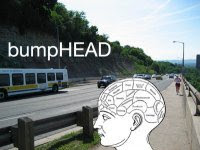 plus dub with Klyde Broox and friends

Here’s an idea for a reading event:

There are an equal number of readers/writers and listeners/audience members.

Each writer gets five minutes with an individual listener, or a tiny group of listeners.

They read some work and perhaps answer a question or two (which could be prepared by the listener, prepared ahead of time by the organizer, or by the other writers – perhaps each listener is given the same question to ask different writers).

The bell rings and the listeners move on to a different writer.

At the end, there can be a group discussion / panel with comments and questions provided by all.
Posted by gary barwin at 2:44 PM 4 comments:

I posted this comment/question on the smallpressers@yahoogroups.com listserv and thought it worth reposting here.


I've been thinking about publishing online and the idea of the archived ephemeral.

I have boxes of "ephemera" -- all manner of leaflets, flyers, balloons,
sticks, etc -- publications that are somehow not "books" and were
published with some idea of their own impermenance or at least in
opposition to the official book record. Some of this ephemera is quite
old and has a kind of collectibility due to its very fragility and
transient nature.

I was wondering about how publishers and writers think of publishing
online as different from this kind of ephemera. Things like online
journals are, I imagine, thought of as permanent and archiveably online
entities, in the way that print journals are records of a particular
moment in publishing and are kept. Are websites like books? Are things
like blogs the equivalent of ephemera? (They are some kind of a record,
which may be kept or archived) of a piece in transition or a piece that
marks a particular time, publishing event, or etc. Many blogs, like some
ephemera, may even record drafts, moments in a process, etc. They are not
meant to be considered "finished" products, even knowing that they may
exist online until the apocalypse or the demise of Google, whichever
comes first. Some blogs are like journals, written with an eye to
publication or at least the permanent public record. Some are more
transient.

And for that matter, what are notes like this? Posts to archived
listserves?

(OK, now I have to go fill in for the gym teacher--the kids smell music
teacher phys ed inexperience fifty miles away.)

The image is from the University of Florida's Ephemeral Cities Project.
"The time is 1880-1920. Ephemeral Cities is an integrated collection of maps, documents, museum objects, photographs, and ephemera that breathe life into the static renderings of the historic fire insurance maps created by the Sanborn Fire Insurance Company."
Posted by gary barwin at 2:44 PM No comments:

I wrote the following letter to the local Hamilton paper (The Hamilton Spectator) about David McFadden, however they didn't publish it. So, I post it here.


WHY ARE YOU SO SAD? DAVID W. McFADDEN HAS BEEN NOMINATED FOR THE GRIFFIN POETRY PRIZE 2008!

A few days ago, David W. McFadden’s book, Why Are You So Sad?, was nominated for one of the most prestigious literary prizes in Canada, the Griffin Poetry Prize, and I for one, am delighted. It’s been a long time since his work was given such recognition. As a writer and as a Hamiltonian, he has been an inspiration to me. I’m pleased to think that as new readers encounter his work, they will encounter our city and see in it something of the depth and wonder that McFadden has seen here.

Before I moved to Hamilton eighteen years ago, I already knew a lot about this city. I had a sense of its complexity, depth, humanity, humour, and vitality. I knew that it was a place rich with the details of everyday life, a town where one might be stricken with bemusement or wonder, or else surprised by coincidence, sadness, or indescribable joy. How did I know this? I had read the writing of David W. McFadden.

He was well groomed and well dressed
and he stopped me on the street
and asked for a quarter.

When I gave him one he said:

I can draw power
from the ground
up through my legs
to make my heart
shine like a searchlight.


I love how this poem is able to be funny and compassionate at the same time.

McFadden’s Hamilton is not limited to cartoon cut-out figures of steelworkers, Ti-Cat fans, and Tim Hortons’ coffee drinkers, though real-life three dimensional steelworkers, Eat ‘em Raw fans and coffee drinkers are there. Cities need writers to reflect the richness of the city back to the people who live there, as well to the people who do not. Even though he moved away from here in 80s, McFadden is our Hamilton writer, reflecting the complex simplicity and simple complexity of our city. We should name a street after him: he’s more Hamilton than Liszt!

(Note: the reference to Liszt is because Hamilton has a street downtown named after Liszt due to the Romantic music festival at McMaster University.)
Posted by gary barwin at 10:16 PM 3 comments:

Office of the Big 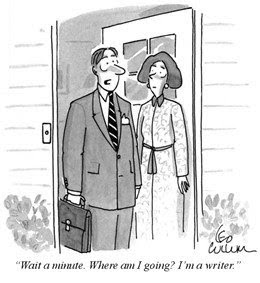 This is the opening to a story of mine that Taddle Creek is publishing. I'm unsure as to whether I prefer "Big Office," or "Office of the Big." The location appears a few times in the story, a bit metaphysically and with some kind of Kakfa-parablesque overtones. What do you think? Which is better?


We were sitting in a waiting room
outside the Big Office. I’d
brought a copy of a jazz magazine to
read and it sat on my lap, unopened.
She was around my age, mid-twenties,
her dark hair tied back, her jeans and Tshirt
plain and nondescript. Did you
know that Chet Baker died by falling
out of a window? she asked. Imagine,
she said, the propped window, Chet’s
lank body draped sideways over the sill,
a leg hanging over the edge as he gazes
out at the Amsterdam street below.
He’s singing a tune in his sweet voice.
Maybe it’s “When I Fall in Love,” because
then he really did fall.
Posted by gary barwin at 1:39 PM No comments:

The David W. Griffins: Why Am I So Glad? 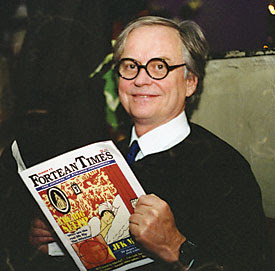 I am so totally delighted by the inclusion of David W. McFadden's Why Are You So Sad? on the Canadian shortlist for the 2008 Griffin Prize.

I cite the judges citation:

“David McFadden has been a major underground poet all his writing life, and the young poets discover him every year. He has always been the darling of the avant-garde, but he is the most readable poet on the planet. Like his hero William Blake, he lives at ease among the most supernatural of events, and gazes in wonderment at everyday things. As a poet he reminds you to be yourself, to be yourself in the world, and give it a chance to amaze you. While reading his beautiful clear language, you sense that he is a trickster, but you cannot help believing every stanza he writes. If there is any such thing as an essential poet, here he is.”


I wrote about the book here saying that it should be a shoe-in for the Griffin and actually, amusingly, the Griffin blurb quotes from part of the entry, though not unattributing the source.

This kind of recognition is a long time coming for McFadden and painfully overdue. so, congratulations, David!

I should acknowlege the excellent, thoughtful editing of Stuart Ross, who helped the book become what it is. We need champions of Canadian literature like him.
Posted by gary barwin at 1:14 PM 1 comment: