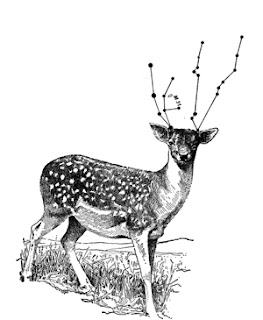 
It was a large world and the antlers were alone. Above, the grey sky remote and unobtainable; below, the grey ground cold and impassive. The antlers felt only the frigid wind as it rattled toward the bare winter branches, the branches smug and self-satisfied, each branch attached to each other, each attached to still larger branches and those attached to the solid trees themselves.

The branches were not alone. There would be spring and running sap. There would be a green budding, and new leaves, and the reassuring flurry and buzz of insects. There would be birds' nests and song and the new life and companionship in the snug of the forest.

But the antlers were alone.

Surely, the sleek head that had been their home would worry for them. The soft skin beneath the antlers would wrinkle and furrow as the head considered what was to be done, as the head recalled the past and considered the possible configurations of the future, and the antlers, only just born, would feel their belonging, their roots cossetted in the reliable skull of the reindeer or caribou that was their steady place in the world.

But now, the antlers were alone. And now they remembered. They were once not one but two. Together, their brother or sister antlers had reached and branched toward the future and the sky. Together, they had grown, knowing that beside them another antler was growing, a curling slow-motion sarabande of development through the unbridled air as they pronged and tined, as each diverging part of them found its own road, a bony flowering, opening to possibility.

But the antlers were alone. Without deer or caribou or fellow traveller, they could not signify maturity or dominance, they could not crash against another, they could not be a proud constellation of bone, an efflorescence pointing to various in the night sky, a proud flourish above an animal as it chewed bark with vigour.

But, in this life, the antlers thought and they lay alone on the barren ground, whether fern or dinosaur, leaf or antler, despite ice age or nuclear winter, capitalist apocalypse or the Icarus-like oblivion of political systems, we must wrestle our fate, we must be vibrant and hopeful though the world be contingent and insecure. We must rise as the worm rises from its hole when the rain fills the earth with its drowning. We must be the quarry which leaps over the bullet's path, the fruit which rolls from the indifferent knife's treacherous descent. We must choose to be the road itself lying down before our own life's traveller. We must be the snail and not its iridescent yet regressive trail.

And so the antlers hoped. The antlers imagined. The antlers attempted to reframe their desire and their memories. They attempted to remember the wisdom of their past and the practical guidance of their dreams. Where would they go? They had neither legs nor wings, claws nor fins. The antlers could neither crawl nor fly, climb nor swim. The antlers must remain. They must find solace or triumph in their own contingence. They must seek a meaningful narrative trope to guide them. A child, a victory, a consolation, a miracle, an unanticipated change in circumstance.

Just then, a small boy emerged from the forest and wandered along the frozen ground. He had a round face and eyes that examined at the world without expectation.

The two stones ticked against each other in his pocket he walked. He whistled tunelessly, like the wind blowing through a crack in a door.

Further along, he found a piece of string, a red bottle cap, and an empty bullet casing.
Then he saw the antlers.
“Oh!” he said. “Oh!”

He stopped and examined the antlers. He waited. Then he lifted the antlers from the ground. He turned them about in his hands. He felt their smooth surface, their bends and their pockmarks, the places where they had been worn by rain and wind, the sharpness of their tines, the corrugations and furrows of their base. He held them close.
“Oh,” he said. “Oh.”


Then he removed the string from his pocket and tied the antlers to his head. Then he began to walk. The antlers and the boy. They did not speak. They walked.
Posted by gary barwin at 3:48 PM No comments:

Yiddish for Pirates on a bunch of lists...

This has been an immensely surprising and gratifying year. My novel, Yiddish for Pirates, has, very happily, received some very nice attention and appeared on several lists. I am both blabberfasted as well as delighted.

The Globe 100 Best Books of the Year

“National Bestseller”: has appeared on the CBC Books, The Maclean’s, The Globe and Mail, McNally-Robinson, and Toronto Star lists.

Letter to Audible.com about the Audiobook version of my novel Yiddish for Pirates


I’m so very delighted that Audible is doing the audiobook of Yiddish for Pirates. And I greatly appreciate the opportunity to contribute my thoughts for casting notes.

So here are some.

The novel has an unusual voice and tone which is really the heart of the book. I was very aware of the possibility of it being too rich, too much of a muchness, and so I think casting a voice actor must keep this in mind. The text is already rich and dense, a bit like a “Death-by-Chocolate-cake” or a “piecaken" narration. I tried throughout the novel to balance the humour with a genuine approach to tragedy and emotion.

Aaron, the narrator of the book, though a parrot, is like an old Jewish old man in a Florida retirement home. I had initially thought that the voice would be very New York/Miami Jewish, but I think that that might be too much and would make the character sound like a stereotype and it would be too much. Also, there are other characters who, while narrated by Aaron, are not Yiddish-speaking—sea captains, Spanish priests and inquisitors, Indigenous Americans, etc.

When writing, I was very careful not to just make the Jewish character and the narrator himself sound like Borscht-Belt comedians (though obviously I’m riffing off some of the humour) but just to energize the language with its expressions and sensibility. Also, I definitely don’t think a Gilbert Gottfried parrot voice (high and nasal and very sarcastic) would be good, though he is undoubtedly is the world’s pre-eminent Jewish parrot interpreter.

So after some consideration, I imagine the narrator to be something like the old George Burns. Infused with irony and humour, but not too shticky or Jewish-comedian sounding Jewishness (i.e. with a New York/Yiddishy kind of sound & delivery—e.g. Jackie Mason.) I understand, however, that George Burns is not available for this project.

I do hope my narrator to be wise, ironic, philosophical, with a bit of the Yiddish shoulder-shrugging irony and sarcastic “so what you gonna do?” sensibility but there is also a tenderness and genuine poetry to the voice.

I listened to a variety of readers on Audible.

I especially like George Guidall reading Wiesel’s Night. I like the primary sound of the voice but also the Jewish voice dialogue he does here and his ability with Yiddish/Jewish words. It also is an old and somewhat careworn voice but has a strength, wisdom, earnestness, but the ability for irony (and I hope, humour.) All things I’m really hoping for in the audiobook narrator’s voice. Night voice sample.

I thought the recording of Eli Wallach – old and a bit scratchy – reading Stephen King’s Insomnia was also a good model. or his memoir (though he sounds a bit too old for our purposes in this recording.)

I also like Kerry Shale – he can do an old thoughtful voice with humour, though, I note in some of his recordings he does strong accents. He is great with doing a variety of distinct accents and voices. Again, though, such performances could easily take my novel into a too stereotypically “Jewish” voice. Here's a sample of what I was listening to.

Again, thanks very much for the opportunity to provide my thoughts. I’d be very happy to be of any help I can at any point in the process (all of my contact info is in my signature below.)

Best, Gary
Posted by gary barwin at 12:17 PM No comments: