Antinomy for the Eclipse


A vispovid, which, admittedly, sounds like some kind of insect.
Posted by gary barwin at 4:26 PM No comments:


A short poetry video.
Posted by gary barwin at 9:18 PM No comments:

Still from A Becomes 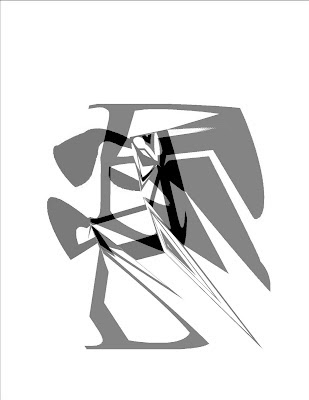 This is a still image from a short vispo video entitled "A becomes," where 'a' morphs into 'B'. I remember my friend Bob once taking a picture of himself and a picture of his dad and then freaking himself out entirely by creating a video where he gradually turned into his Dad. I once created a composite image of my two sons -- the imagined third son that I might have had. Something powerful about playing with such images.
Posted by gary barwin at 2:03 AM No comments:

Books are Closer Than They Appear 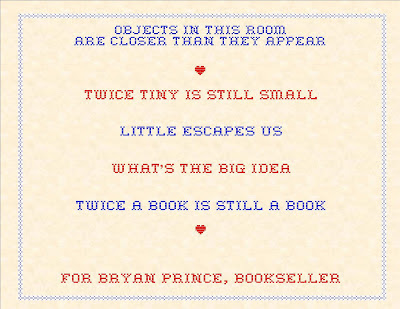 Poem/Image for Bryan Prince, Bookseller on the occassion of the expansion of his bookstore, Westdale (Hamilton), Ontario.
Posted by gary barwin at 5:28 PM No comments:

This is a little video I made of my story/poem "Click," from my book Doctor Weep and other strange teeth The sound is a little degraded as a result of the compression format, but you can get the idea.
Posted by gary barwin at 7:31 PM No comments:

I learned how to read Hebrew as a child -- in Hebrew school and for my Bar Mitzvah. Of course, I have hardly any idea what most of it means. Though it would be fantastic to be able to have access to another language & its literature, I also really relish the fact that I can 'read' this script, pronounce it, even have a strong emotional attachment to it, but don't have any idea what it says. I guess I should get out my "Negative Capability" t-shirt and bumper sticker for this one. In the synagogue, I find the mysterious, heterophonic chanting completely captivating, the non-Gregorian scales, the melismatic singing style with its origin in a tradition outside the West, a in opposition to the chorale/hymn model that we know from churches and Bach/Western common practice. In both the chanting and the text, I prefer not knowing what it actually means, allowing the mysterious allure of the sounds and shapes to conjure for me all types of numinous associations.

And while we're on the subject of things Jewish, check out this amazing CD, "Oy to the World." It is traditional Christmas songs performed in Klezmer style (Jingle Bells is even sung in Yiddish.) They also throw in a few surf guitar licks, some Cream, and a few other anomalies. Thing is, the playing and the arrangments are brilliant and are not actually parodies, but just other versions. The cognitive/culture dissonance is entrancing, not to mention hilarious. The band is the Klezmonauts. The site and playable examples are here.
Posted by gary barwin at 10:44 AM No comments: