When I was a child, my parents possessed only a few books of poetry. They’d moved to Northern Ireland in the early sixties and I was born there. We moved to Canada in the middle of The Troubles. Yeats. Halevi. And some books by Seamus Heaney. North. Death of a Naturalist. Wintering Out.

I first discovered North and was mesmerized by its small perfect blueness. The stylized Viking boat on the cover. I learned that my dad was at Queen’s University the same time as Heaney and remembered him. Our neighbours did, too.

As a young teen Heaney, was the most important teacher in my singing school. I revelled in the loamy richness of his words. To lean into language and what it could do. The intensity of sound. The peatiness of heard relations between words or their bright metal. Subtle rhymes. The line, like an eel in a basket of eels, amazed itself. The form, beaten into a shine. Or seemingly discovered.

And what unusual words, unearthed from the word-hoard could do. Rich. Resonant. Strange, yet Antaeus-grounded. The world is always a dialect of itself. History is etymology. A bog which transforms and preserves. Which makes myth. Keep your eye clear as the bleb of icicle. Trust the feel of what nubbed treasure your hands have known.

My father was a gynaecologist, not exactly the rural farmer-father of Heaney. But I understood that when Heaney talked about land, he spoke about the land that we walked through. Traveled out to: its strands, fields, mountains, meadows, and fields. This wasn’t the out-of-focus misty-eyed Ireland of romance, but, as the words showed me, the bog-rich, palpable, visceral world. And it had its own stories.

I learned to listen to the words as words. I remember Heaney at York University reading the names of Irish towns. Speaking about the names in the fishing reports. (And I remembered that music from my childhood, and my new-learned music of names on late night CBC radio.) The specifics of one’s voice. That thick Ulster, the boy’s version which I used to have. Language, emotion, life, land and culture were snug together.

But I also learned about social engagement. When my father remembered Heaney, it was to recall him standing up at a student meeting and deliver an impassioned speech. The Troubles entered Heaney’s poems. Memory. Culture. Language. How poems expressed and investigated. Troubled. Thought and sang.

And our ethical engagement, our understanding of the world was rooted in both time and space. History and culture. Our myths, legends, and stories. In our language. Language, feeling, thought. And poetry: both tool and pleasure.

So thank-you and rest in piece, famous Seamus. History, the earth and the language receive you. I hope they treat you as well as you treated them. 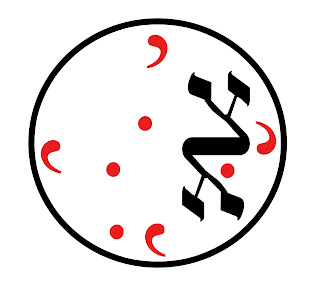 Copy/pasting the Physical World: the bookworks of Ragnhildur Johanns 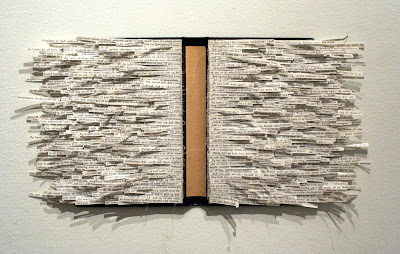 My commentary about the bookworks of Iceland artist Ragnhildur Johanns is now up at Jacket2. 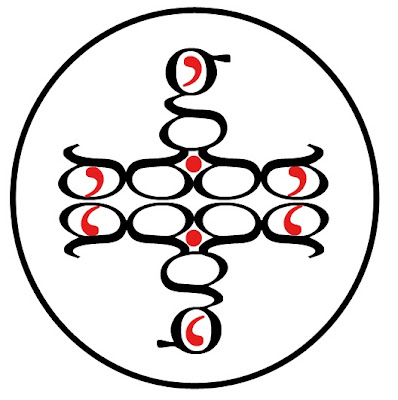 On The Puritan's Town Crier blog, I write about one of my literary responses to the experience of violence in our society and stories from my criminal lawyer wife.

Thanks to the dour Puritans for inviting me to write this and for publishing the original work and this.

The Red Wheelbarrow: a translation 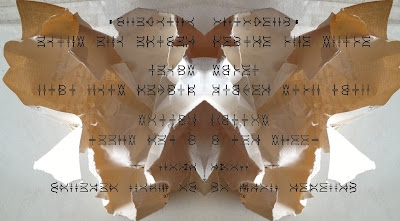 Moribund Facekvetch And then the machinery of poems and meaning. The paper. The image of the paper to me is very sensual and itself might posit "so much depends upon" the sensory or imaginative engagement with the materiality of the world, but also of writing and its various components (paper, textuality, the alphabet, etc.) 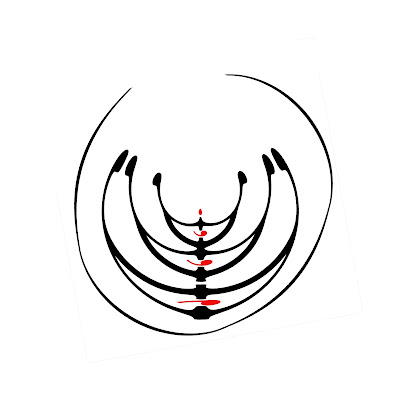 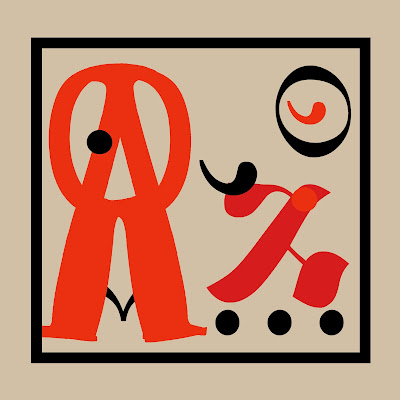 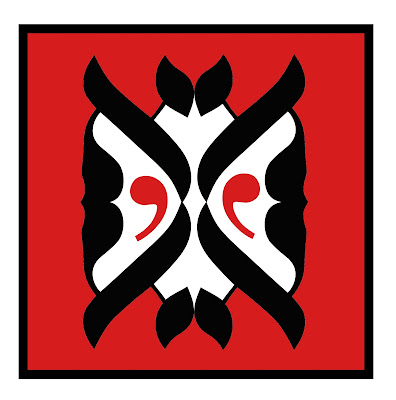 kevin mcpherson eckhoff and I discuss his outsourced Their Biography.

Here it is.
Part of my ongoing Languageye series on Jacket2 about reading visual poetry.

Posted by gary barwin at 1:14 PM No comments: 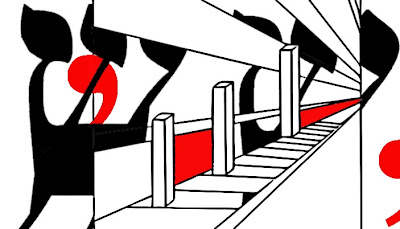 OpenBook Ontario interviewed me about various things. I spoke about fetuses, my conception, dogs, revising poems that don't work, whales, and other matters of great importance to poets.
Posted by gary barwin at 10:20 PM No comments:

On small press publishing and above/ground press in particular

Alejandro Bustos interviewed me for an article about rob mclennan's above/ground press. The article, which includes discussion from other writers is here on Apt 613.

He asked me a number of questions and since there wasn't enough space to include my answers, where I wax rhapsodic about above/ground press and about small press in general, I thought I'd post the full text of the answers that I sent him.

What does the work of above/ground press mean to you?

Over its long life (at least as poetry publisher), above/ground has continued to introduce me to writers and work that I didn’t know about. The production values are down-and-dirty which means that rob mclennan is able to create an amazing number of various kinds of publications (periodicals, chapbooks, pamphlets) at a very low cost and make them very widely available. His approach puts the work and its accessibility first. Though I've grown to like the slightly grungy aesthetic: quick, subversive, a bit dangerous, non-compliant.

When did you first hear about a/g press?

How has it evolved, if at all, since your first interaction?    I don’t know when I first heard about it-- I think my process of discovery was one of osmosis. It seems like a/g was always here. Whenever I looked around, there would be another one of these publications featuring perhaps a very well known writer, or someone I’d never heard of.  And often I’d run into rob at literary events and he’d hand me a handful of little books. “Here, check these out.” Or I’d mail him twenty bucks and I’d receive a big stack of a/g publications. It has always surprised me, the range of people he has published: From Pulitzer Prize/National Book Award winners to first-time published poets.

The meaning of paper publication is different than it once was. There is lots of work available online, but, though a/g hasn’t changed much – rob publishes the work as regularly as the tide -- coming across these physical objects – these little chapbooks and pamphlets – is different now.  I’m surprised again and again at the electricity that can be generated by just a few sheets of folded paper!

Poets are often overlooked by the press and publishers.  Given that this article will be written for an audience that is comprised mostly of non-writers, can you please explain how critical a publisher like a/g press is.

It’s vital that writers and readers have access to engaging writing that exists outside of the strictures of commercial publishing. Of course there is lots of great writing that makes money, but there is also lots of exciting and engaging writing that, by its nature and the nature of publishing, can’t exist within the commercial framework. Presses like a/g allow these writers to be published and allow readers to read their work. I’d use a nature metaphor: Commercial writing is writing that is domesticated or harvested in some way. I see the work published by presses like a/g as writing in its wild form. So rob, as editor, is more a wilderness guide than combine harvester.

For those outside of Ottawa: Given that you do not live in the National Capital Region, I would be interested in hearing your view on the poetry scene here.

My impression is that the scene is very vibrant. There are many fantastic people doing interesting things, not only in terms of creating great writing, but in terms of supporting and promoting the work of others through small & micro press publishing, innovative reading series, performers, blogs, etc. For example, to name just a few people: Cameron Anstee, Max Middle, Pearl Pirie, rob mclennan, Amanda Earl, jwcurry. There are initiatives that exist in Ottawa that don’t exist in the same way in other places.  Not living in Ottawa, it’s always exciting to hear about what is happening there.
Posted by gary barwin at 10:46 AM No comments: 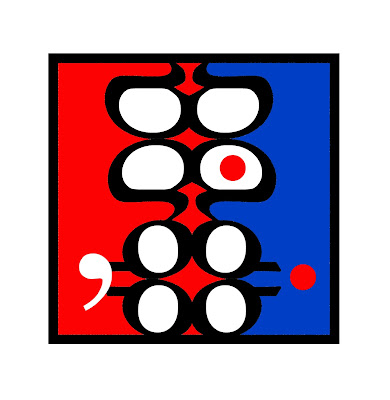 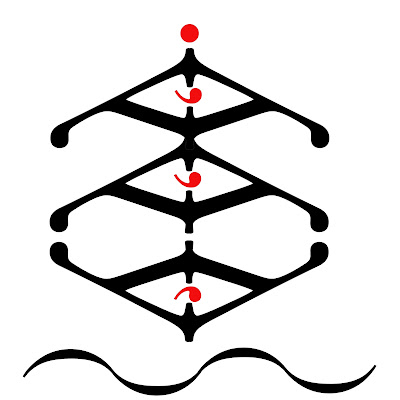 Tracy Kyncl at The Puritan's Town Crier blog writes about some recent Toronto-areas readings including my performance at the Margaret Christakos-curated  P.P.S. Do You Copy? event exploring the Writing after Conceptual Art exhibition at the Power Plant gallery.

She says some lovely things! It's here.

One, that two of my images have been selected to be lamppost banners for the King William St. Art Walk.

And two, I'll be E Writer in Residence at the Toronto Public Library for a month in the fall. The E writer position is part of the TPL's Young Voices program. This should be fun.

And lastly, I'll be teaching a creative writing class at Mohawk College again this fall. The course will be Humour Writing. It's always fun since I get to steal the best lines from my favourite comic writers to share with (or pass off as my own) with the students.
Posted by gary barwin at 10:41 PM 2 comments:

The Re(ad) Yarn: Narrative in the Visual Poetry of Satu Kaikkonen

My article and interview with Satu Kaikkonen about her fantastic visual work is now up at Jacket2: It's here.
Posted by gary barwin at 10:28 PM No comments: 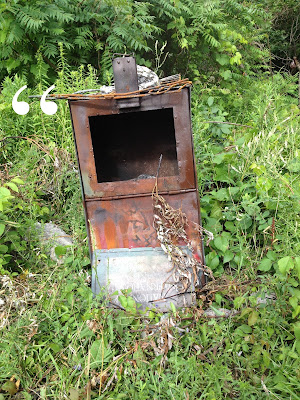 Posted by gary barwin at 2:37 PM No comments: 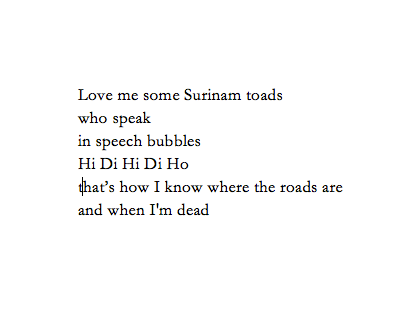 Posted by gary barwin at 5:22 PM No comments:

Fabulist of the surface: Márton Koppány and the shimmer of meaning 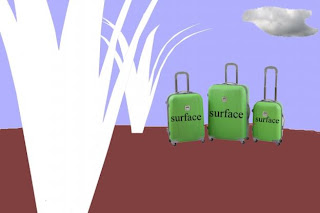 My new commentary is up at Jacket2. This time a discussion of some work by the brilliant Márton Koppány.
Posted by gary barwin at 10:16 AM No comments: