A few years ago, I began writing a novel called Yiddish for Pirates.  So nu, you have a better idea? Most nights, I’d walk my dog and think about what the book would be about. My regular route took me past the Shalom Village retirement home, lit-up, large and ship-like against the dark. To me, each window seemed like a porthole into a life and it made me think about how each of us is a book, an encyclopedia, an entire library of memories, emotions, and stories. Sometimes we can’t put it all into words. Sometimes the words begin to disappear, become vague, or are difficult to retrieve. Sometimes, the words the best container or conveyance.

I know this will surprise you, but Yiddish for Pirates turned about to be about…Yiddish-speaking pirates. It’s also true that at a signing, a reader came up to me, quite irate, upset that the book wasn’t an instruction manual for pirates to teach them how to speak Yiddish.

My Jewish pirates live around the time of Columbus and my protagonist is a Bar Mitzvah boy from Eastern Europe who becomes a pirate after being expelled from Spain at the time of the Inquisition.
When I began writing the the book, I thought about who might be a good narrator, who might be there to observe all that piratey stuff. Then I realized. Of course, a parrot would be the perfect narrator. It sits on a pirate’s shoulder and observes everything, like a Go Pro camera. And like a Greek chorus of one, it can comment on the action and make sarcastic asides. As I like to say, there’s a wisecrack in everything. That’s how the light gets in.

And parrots learn the language of whoever they are with, so this Polly was a polyglot. But, parrots (at least the ones that speak human language) have to use the limited language they know, the limited language they have received—the words, tropes and stories—to express their reality. To mediate between themselves, their thoughts and the world. And to question whether this language is expressing their reality or is constructing it.  This is just like human beings. Or writers.
And then I read about the explorer Humboldt who at the end of the 18th century came across an indigenous village that had been entirely destroyed by war. There was no trace of its people or its language left—it wasn’t a written language. Except, there was one parrot that had flown away from the village and knew about 30 words of their language. The language survived because the parrot was a kind of a dictionary, a book. So Humboldt wrote these words down, and was able to figure out the meaning of many of the words since the parrot used them in context. And then I read about a contemporary artist who had taught modern parrots to speak this language. From parrot to parrot, this language, this way of seeing the world, this world view, was passed down. Like with books.

I  also read about domestic parrots in Australia that escaped into the rain forest and taught the wild parrots how to swear like suburban Australians, but maybe that’s another thing.
Maybe my narrator is the original parrot who sailed with my pirate and Columbus, or maybe that parrot passed his story down to another parrot who passed it down to another one and so on. The parrot is like a book. A dictionary. A language.


Memory is an important concept for Jews, but it’s also a feeling. We feel deeply that we should “never forget” and we do our best to pass on our stories and culture, from great tragedies to kugel recipes to jokes and family stories. But we also pass on that “sense” of Jewishness.

I wanted my book to be filled with Yiddish because it carries the culture, the humour, the memory of Ashkenazi Jews, Jews from Eastern Europe where my family is from. And so my parrot spoke Yiddish.

There’s an old Yiddish saying that I quote in the novel, The tongue is not in exile. It means that even if you have to leave everything behind, even if you are expelled, like the Jews of  Spain in the Inquisition, even if you bring nothing but the clothes on your back, you always bring your language with you. Your words, your sayings, your stories, your jokes, your sounds, your culture and world view. Even the ways you move when you speak. When I think about Yiddish, I move my shoulders in a certain way. The world has a certain texture, a certain philosophy, a certain physics, and it’s carried in the language. And like many Jews, though my knowledge is limited, I have a great love of Yiddish—it’s in my bones.

Yiddish in its vitality and its humour, has an ability to sum up the richness of experience and Jewish being-in-the-world. Wherever Jews went, with or without possessions, they also brought their language. And for me, Yiddish expresses a quintessentially Jewish irony and a fatalistic yet celebratory humour. They tried to kill us but instead we lived and celebrate with good food and family. Life is hard but still, we’re around and can tell jokes about it. We’re often a pessimistically optimistic people. Is the glass half full or half empty? Full-shmull. As long as we have a glass.
Yiddish is a library of our experiences and it has travelled with us through time and space. Somehow, even if you don’t know much Yiddish, you can still get a sense of its way of engaging with the world. In my novel, I engineered a way to have my main characters speak Yiddish even though much of the story takes place in Inquisition Spain where the Jews spoke Ladino, a Hebrew-Spanish hybrid.
By the way, did you know that Columbus brought a translator who spoke Aramaic and Hebrew with him, in case they ran into one of the lost tribes of Israel?
“So, how have you been, this last 2000 years?”
“And what did you have for breakfast? Was it eggs?”

There is a particular music when words from another language are included in a text. It has a je ne sais quoi about it. A pinch of spice which colours the whole thing. There is a particular energy between the words of the main language of the text and the words from the other language. An electric charge of sound, colour, sense and history leaps back and forth between them.

A few years ago, I read Junot Diaz’s The Brief and Wondrous Life of Oscar Wao. It contains a lot of Spanish from the Dominican Republic and its America diaspora.  The Spanish adds a distinct new characteristic to the English. Like adding a clarinet to a string quartet. Or bagpipes. It’s apparent how rich and vital the language is, from the sound alone. I don’t know what any of it meant, but it makes it clear to me that I’m listening to people speaking from a culture that I am outside of. It isn’t meant for me, but at the same time, it allows me to listen in a bit. I also know that Dominican Americans would understand everything. Diaz is making a deliberate delineation between being inside and being outside the culture. It’s both an aesthetic and a political choice.

I’d add that the notion of using a non-English or a heritage language can be extended to dialects or regional variations.  I say all of this aware that I’m here speaking in Ireland and that many authors have integrated Irish and Anglo-Irish dialects into their writing. In Canada, this technique is increasingly used by Indigenous authors. And it is occuring for the same reason. A remembering, an articulation against erasure, of being spoken for, a reclaiming of culture, land, place, sense of being in the world, of concepts indivisibly connected to language and tradition. After all, the Canadian government banned these languages, explicitly trying to extinguish them and their speakers. This is sadly a familiar story and one that I’m sure you recognize.

I also think of Holocaust survivor Paul Celan and his awareness that he was writing poetry in German, the language of the regime of the oppressor.

As writers, as storytellers, as people who live in language, it is our job to claim the language for our own, to interogate its assumptions. To speak the language and not have the language speak us.  Language gives us access to the collective memory, the grammatical and semantic technology embedded in its structures. Language gives us access to a word horde, a grammatical repository, a choreography of meaning. But we need it to be a trampoline and not a trapdoor. We need to be able to have ownership of this inheritance, to forge it into the tool that we need to shape and express our world. Perhaps this means expanding it, reforming it. Perhaps this means we need to communicate using other languages with which we have a different relationship, a language which relates differently to the world, the dominant power structures, the prevailing traditions, cultures or economic or social structures.

Which reminds me. There was this sailor, Yankeleh. He leaves a pair of pants to be repaired baym shnayder—at the tailor. After seven years, now covered in scars and tattoos, he returns to pick up his pants. They weren’t ready.
“Gevalt!” Yankeleh exclaims. “It only took Adonai himself six days to make the world. You’ve had six years!”
“What is there to say, now that the world is done?” the tailor replies. “So, nu, your pants are a tragedy . . . but at least we can talk about them.”

I'm really delighted to announce that my new novel "Nothing the Same, Everything Haunted" will be coming out in Spring 2021--just gotta finish the rest of it!

I'm grateful for all the conversations, links, news and bad jokes from friends -- they help me write this thing. 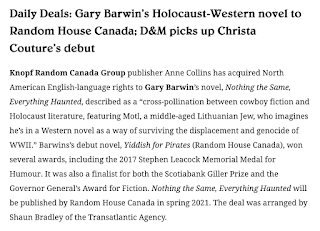