Happy to have several video poems and visual poems in the latest issue of Red Door Magazine.

As little as possible and something illegible in the woods 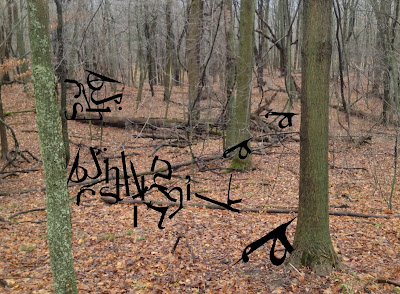 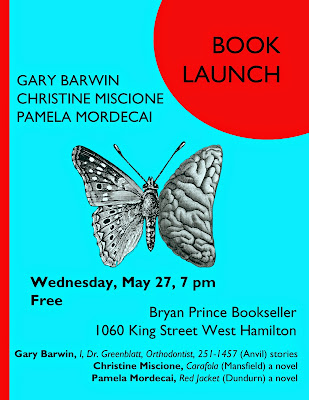 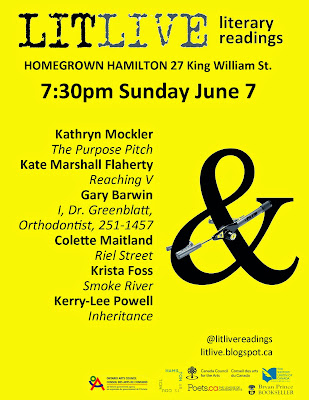 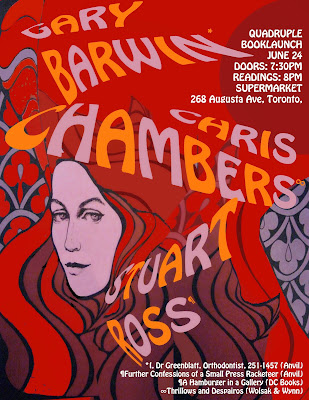 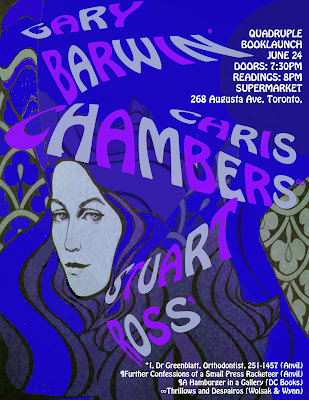 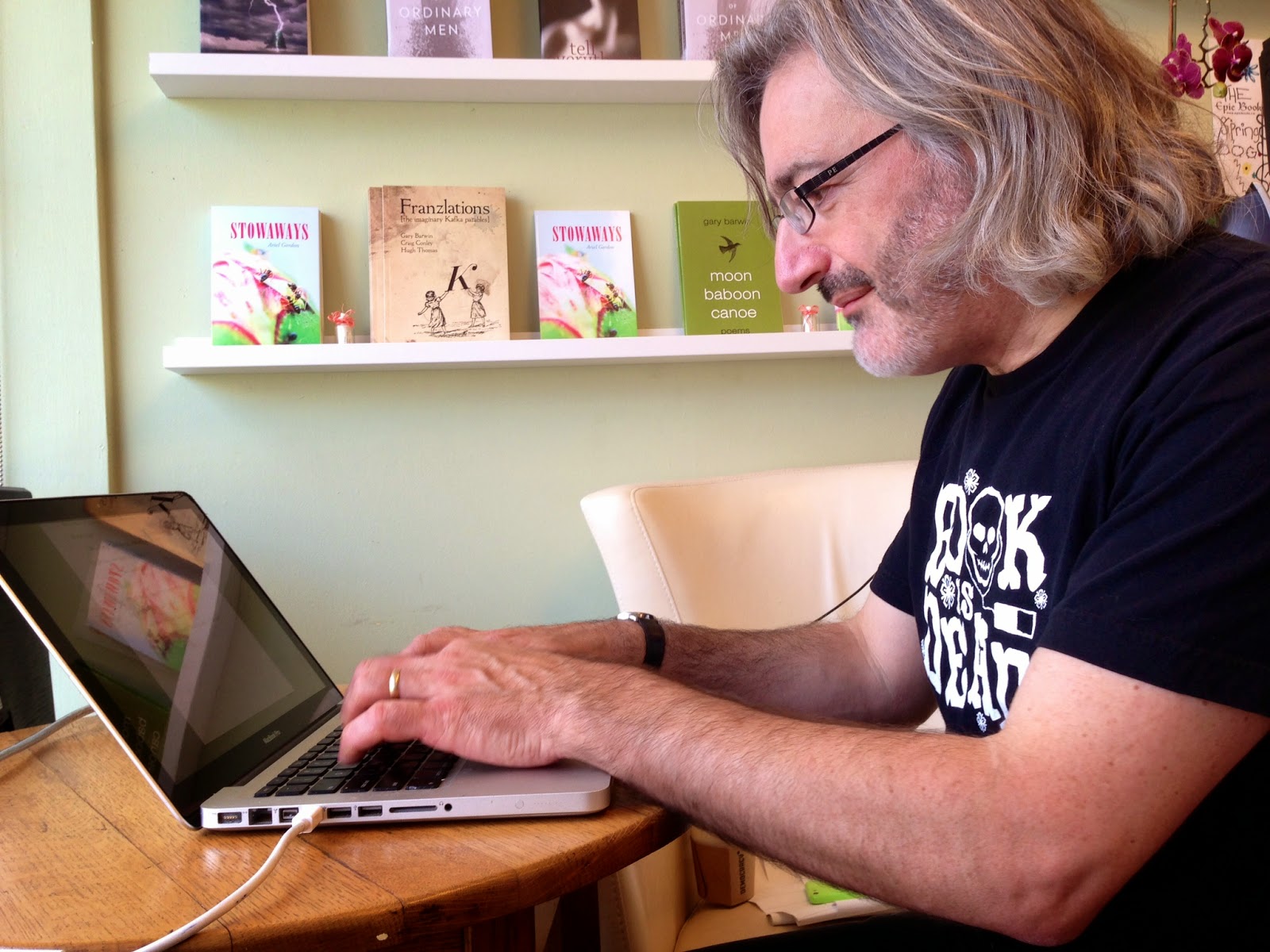 For Authors for Indies Day I was at Epic Books with Ariel Gordon and Amanda Leduc. I sat in the front of the store and wrote a story. I solicited ideas from customers and the other writers. Some of the content came by asking people to pick a book off the shelf and turn to page 106 and choose the 7th line. For example, there's a line from Lynn Crosbie's new book, Where Did You Sleep Last Night?

Late one June night, Avigdor broke into a bookstore in the city of Hamilton. He was a standard issue burglar. Dark clothes, black balaclava (“I always confuse that word with baklava, that pastry-thing my nona used to make,” the lanky youth  said) dirty hockey bag, and a backpack full of an assortment of tools of the trade. A mismatched set of screwdrivers, pliers, hammers, and dulled kitchen knives.

Curly headed Avigdor, former chess champion of Prince Vydor Middle School, once caught futilely attempting to cheat during the city championship in Grade Six with a dog-eared book of chess moves hidden beneath his shirt, and so spent the rest of middle school disgraced, alone in his basement, reading Dune approached the bookstore, UPic Book on Locke with acquisitive glee, UPic. This night, he would break into the store in order to steal another chess book, aspiring to regain his former glory and status with his pimply peers, all knights of the black and white squares.

There was a rickety fence surrounding the small yard at the back of UPic Books. Avigdor climbed up on a recycling bin, scrampled up the fence and fell onto the damp grass. Something oozed beneath his shoulder. A frog. “Damn. An ex-frog.” He scraped the frog guts from his shirt and threw the slurry over the fence.

A small window at the back of the store. “I can jimmy that window with my butter knife,” Avigdor said imagining muttering to himself with classic muhahaha while rubbing his evil fingers together. Avigdor standing on a cardboard box, rooting around his hockey bag, searching for the knife. Avigdor unbalanced as his fingers found the handle. Avigdor losing his balance and falling against the shattering glass. “God Bobby Fisher Kasparoving Bishoping Damn,” he said, wiping the blood tasselling from his forehead.

But he was able to reach in and open the little window and pull himself inside. It was dark inside. He was in a womb of cardboard boxes, publishers’ flyers, and old coffee cups. The mysterious and invigorating smell of bookstore. And bookstore owner. The storage cupboard at UPic.

What now? Avigdor butted his frog-splattered shoulder against the door but it did not budge. He leaned back and kicked. He ran at the door from within the limited boxy storage cupboard world..

Shards of bright multicoloured light and the sound of ripping fly leaves. Avigdor was free, released into a realm of endless spines and French flaps. Of sycophantic blurbs and the antigravitational pull of narrative. Of the possibility of obscure and well annotated opening gambits as played in the classic games of Casablanca.

“So your arm’s broke, you skinny? I coulda guessed.” There was an ancient man, his skin fissured and folded as old tree, but made of shoe.” The man’s arm was in a sling. “A whistling accident,” he said. “So there was this girl. She needed a whistle and I had just the lips. So these days they’re an old ship’s knot, but what, a man’s still gotta live. I whistled, put my shoulder out and fell over. Crack.”
“W-w-what are…what are you…what are you doing here?”  Avigdor asked looking up from the floor.
“Natural, I think. Looking for a book.”
“What? Why?”
“It’s a bookstore. It’s what one does here. What were you looking for? A portal to Mars?”
“But I know you?” Avigdor said like an idiot
“You do,” the old man said. “And if you tell, ‘I kill you.”
“But grandpa…”
“I  kill you, I said. They don’t know I’m gone.”
“You admit you're too lazy to care that one of the witnesses for the case has disappeared?”
“Caring. All that jumping up and down and pumping blood to the pastel-coloured parts of you. Ach. Who needs it? I’d rather take a snooze in sunlight-coloured hooch.”

The phone rang raising a nimbus of dust from its ancient pre-cellular receiver. Without thinking, Avigdor lifted the receiver. The mouthpiece was caked in Paleolithic lipstick, discarded insect carapaces and spit. Avigdor gave the mouthpiece a quick theoretically antibacterial swipe with his sleeve and answered it.
“Hello?” he said. “Hello?”
“There’s a book I need. It’s blue. It was on the radio. It was written by rain.”

Posted by gary barwin at 4:14 PM No comments:

The Fish Species of Hamilton, Ontario Find their Names in Steam

The Fish Species of Hamilton, Ontario find their names in Steam
after "SAUNA 89" (from Erin Moure’s Kapusta)

quillback would not defend the spottail shiner’s lameness,
walking halt

mudminnow would not do rainbow smelt wrong and speak of burbot

your blackside darter was sweet and is no more

least darter will not speak of pumpkinseed

nor will brown bullhead walk again where grass pickerel once walked

mimic shiner’s finescale dace will not be named by creek chub,
lest american brook lamprey profane

alewife will not name gizzard shad

common carp will not speak (too much profane)

and if logperch love johnny darter not at all, walleye love white
crapple even less