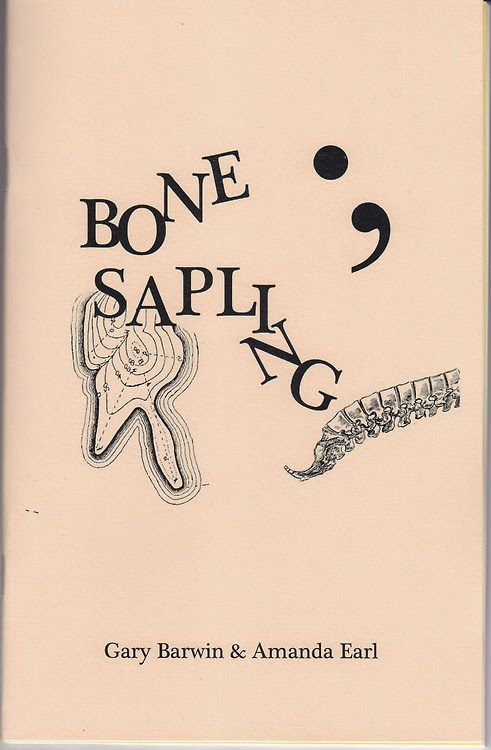 the chapbook can be ordered via Paypal under Chapbooks at AngelHousePress.com or picked up at the Ottawa Small Press Fair on Saturday, June 7, 2014.
Posted by gary barwin at 12:52 PM No comments: 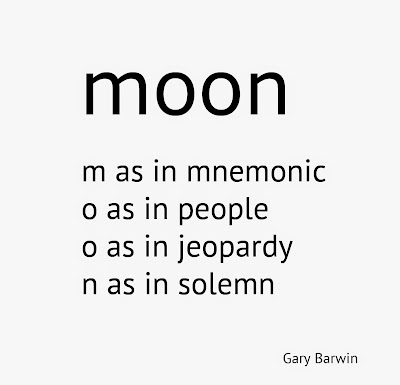 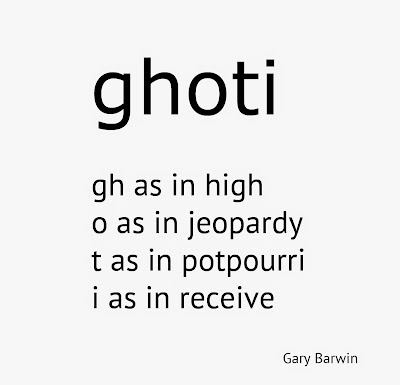 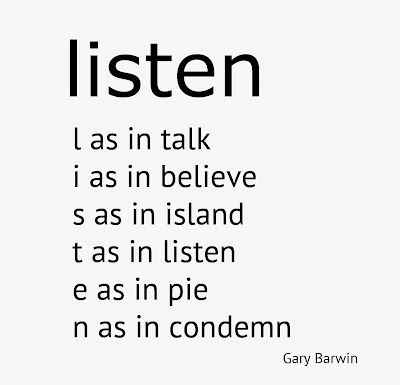 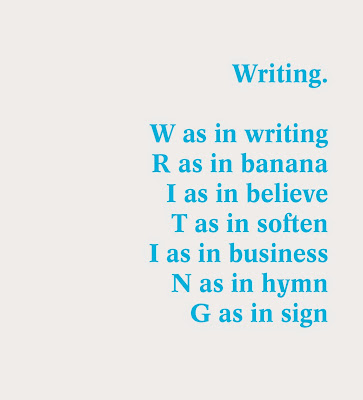 
"And I shall dwell in the my-parents'-basement of my own self forever"
Posted by gary barwin at 12:00 PM No comments:

The privilege and pleasure of reading: a letter

Today, I  received this lovely email which is a good reminder of the great privilege & pleasure it is to have readers of my work…and how great my father is [I've redacted the names for confidentiality]:

Almost every night, my little angel O____ wants to read The Magic Mustache. She smiles, she learns, she counts the number of words, she learns the senses... and she laughs!!!

Every night that she picks that book, I feel I am holding my miracle baby, my angel from heaven. O____ is almost four. After having 5 miscarriages after my first baby and dealing with a big fertility clinic here in Ottawa, my family doctor said: before you make the decision of ending your dream of having 2 children, please go see another doctor, Dr Barwin. We did.

The first meeting we had with your father, he simply said what was wrong with me. He gave me some shots a certain day of the month...a Saturday morning and nine months later, our baby girl was born. After many scares, he took the time to see us whenever we felt the heart of the baby had stopped, and gave us a present for James.

Our son J____ was 5 at the time and was never very interested in The Magic Mustache. He preferred Scooby Doo or Diego but O____ is fascinated by your book.

Thank you for reminding me how lucky we are to have met your father...and you, through The Magic Mustache.
Posted by gary barwin at 11:30 PM No comments:

My first chapbook: phases of the harpsichord moon (serif of nottingham, 1985)

Today, I discovered the page proofs (typewriter and White-Out) of my first chapbook, phases of the harpsichord moon. I created this chapbook in a class with the writer Frank Davey while studying with him at York University in 1985. He invited us to connect with the Meet the Presses monthly book fair down at Scadding Court Community Centre, run by Stuart Ross and Nicholas Power. It was through that I connected with them and with the Toronto small press community which inspired me then, and continues to inspire me now. I am currently—nearly 30 years laters—part of the collective Meet the Presses which runs the Indie Literary Market, which is the descendent of that monthly book fair.

Below are scans of the chapbook. I'm so delighted to have uncovered these pages, buried in a bankers box piled high atop a broken fridge in the basement. It's strange to feel that your past is now 'historical.'

The poem clearly shows the influence of bpNichol who I had studied with the year before and would go on to study with the following year. It also shows the influence of Frank Davey and other writers that both he and bp had introduced me to. There's the concrete poetry, the process poetry aspect, and the Canadian historical content (Laura Secord.) I was also a music student and so the work engages with harpsichords, J.S. Bach, and even Jimi Hendrix. I used an ink calligraphy pen that my composition teacher at the time, James Tenney, had taught me to use when preparing scores. Additionally, much of my work engaged with issues of birth, childhood and fertile psychic ground of the fact that my father was a gynaecologist and fertility specialist. The poem was written on a little Olivetti typewriter that I was given for my Bar Mitzvah.

Some time that year, I had put on a poetry art show at York University's Calumet College which featured huge blowups of some of these pages along with some other texts.

(click on the images to enlarge and then scroll through) 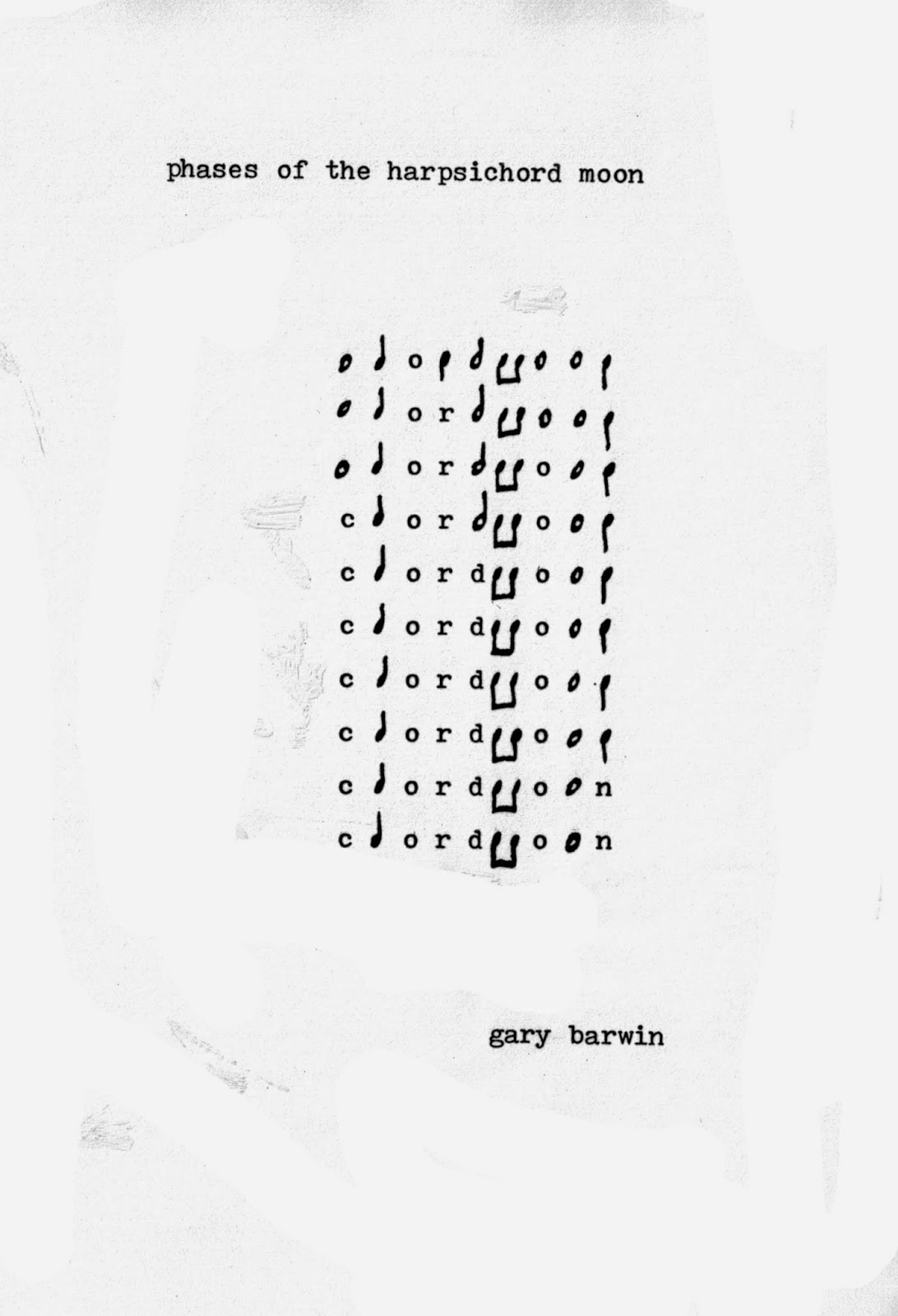 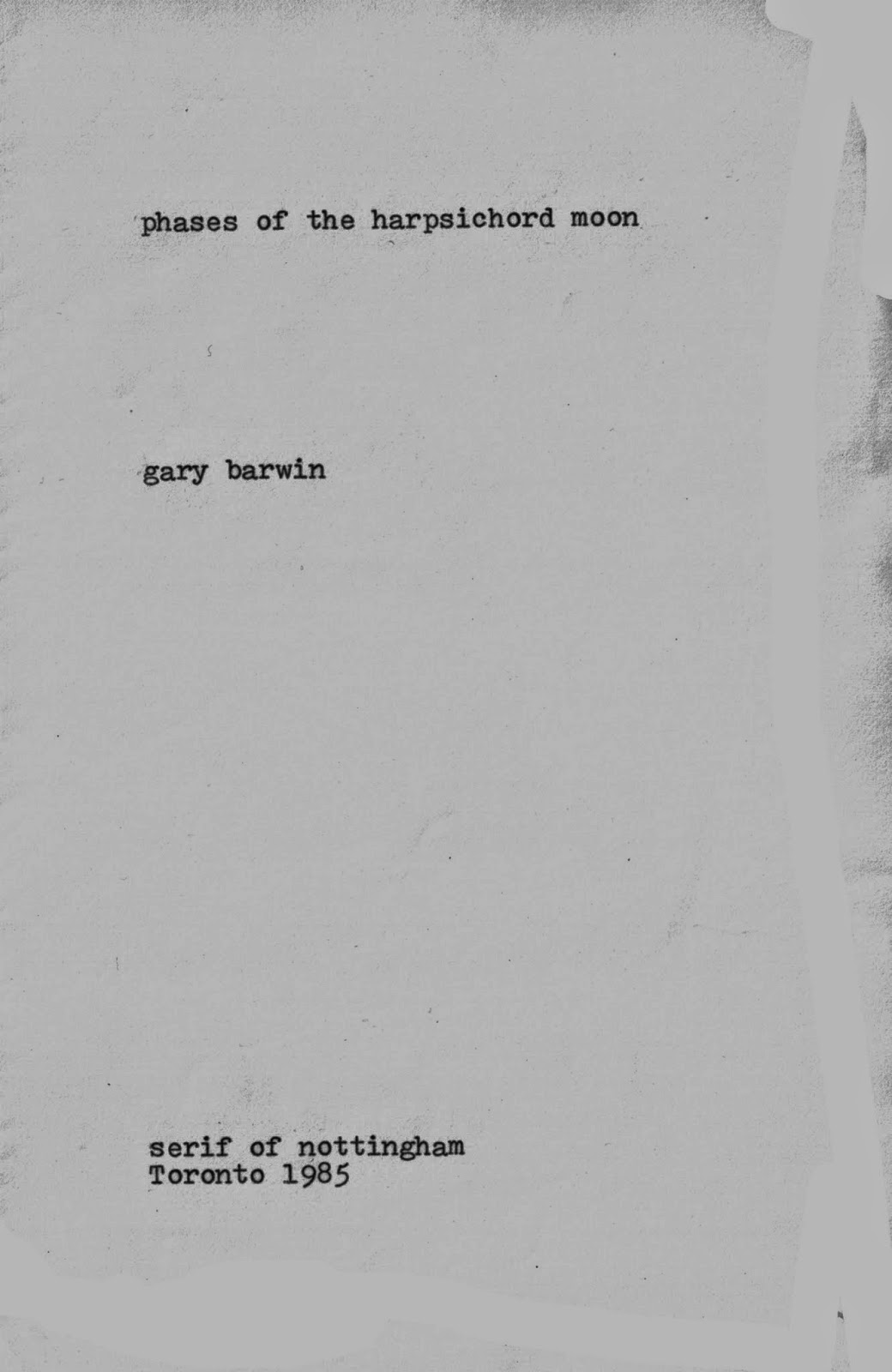 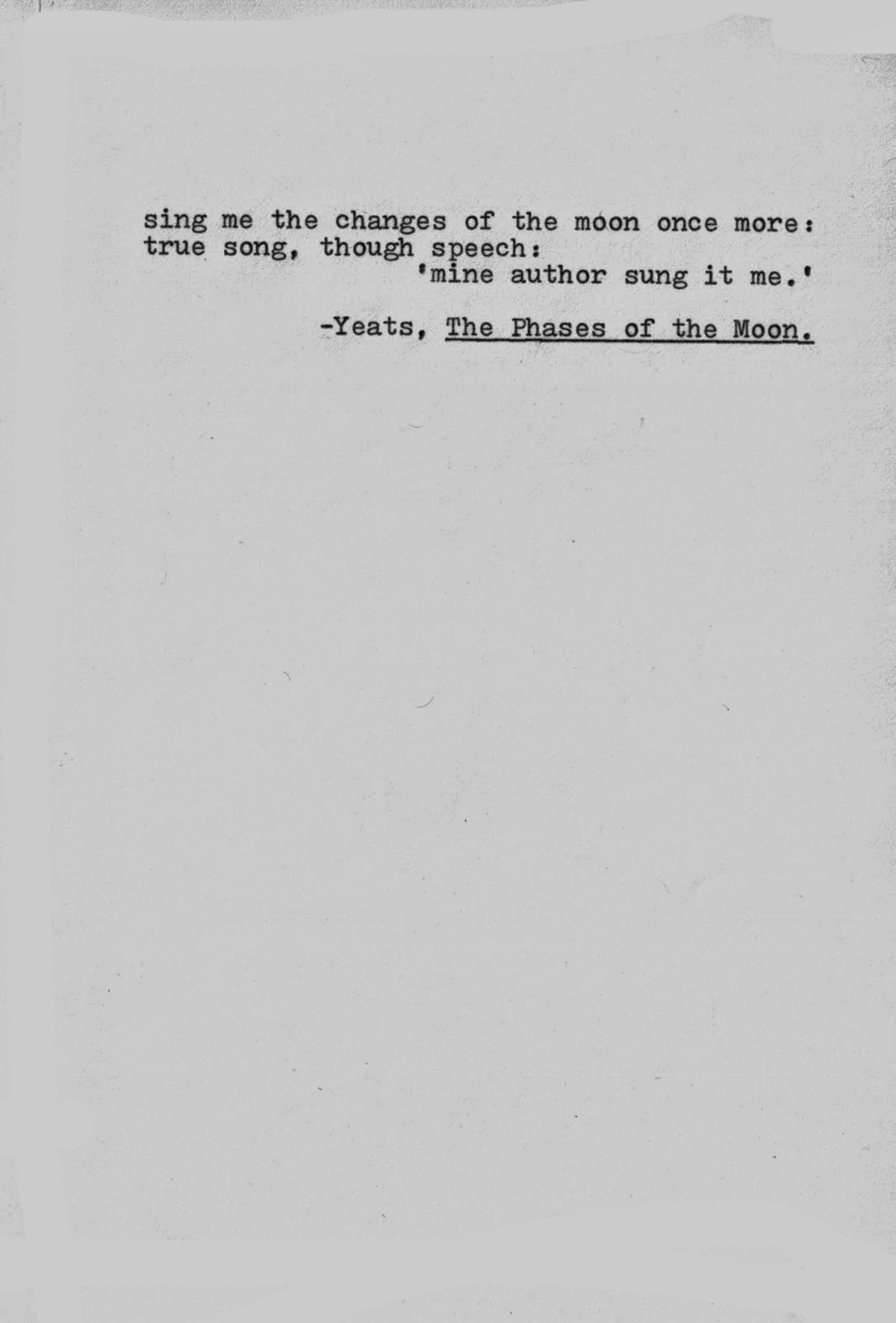 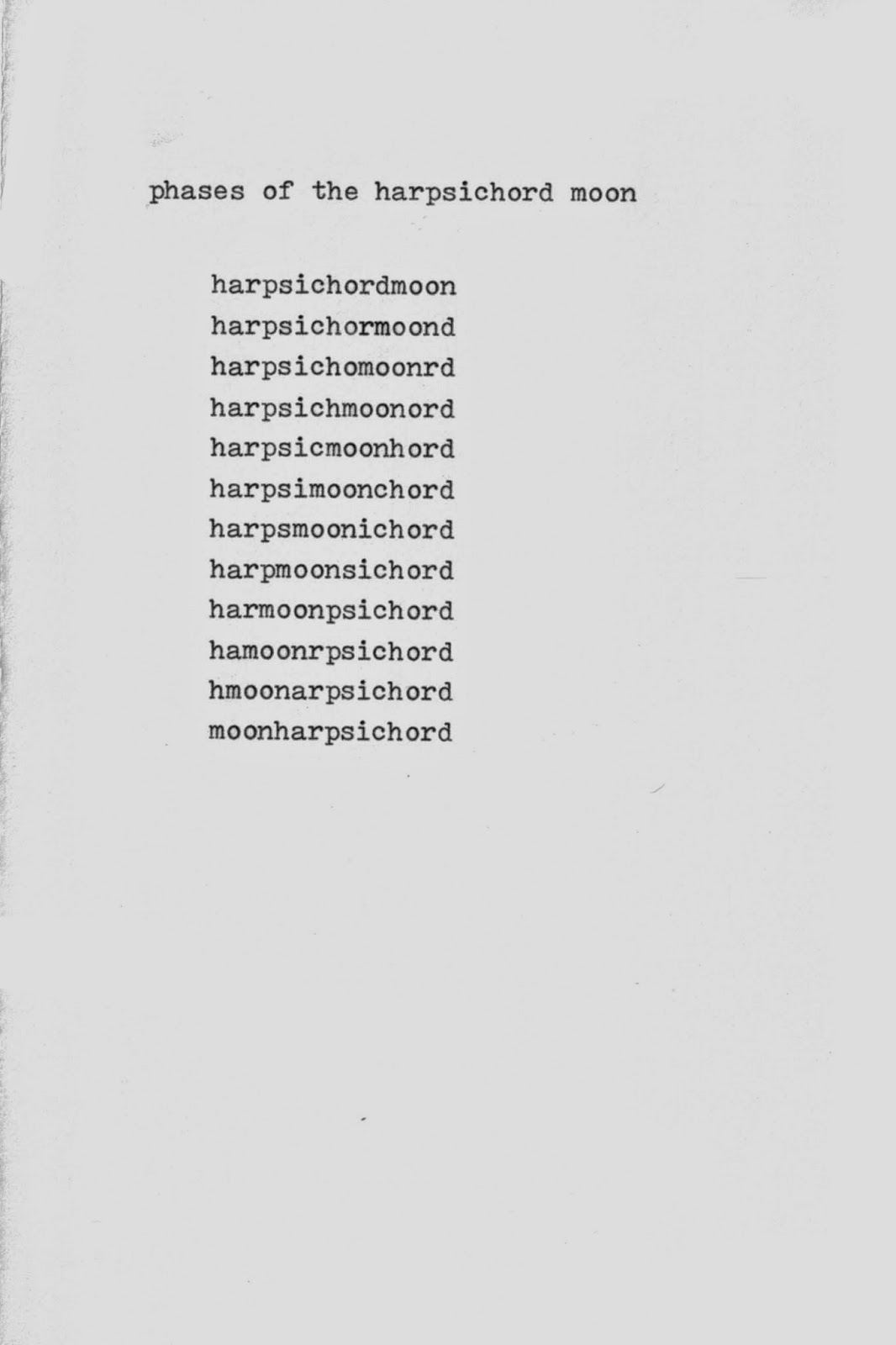 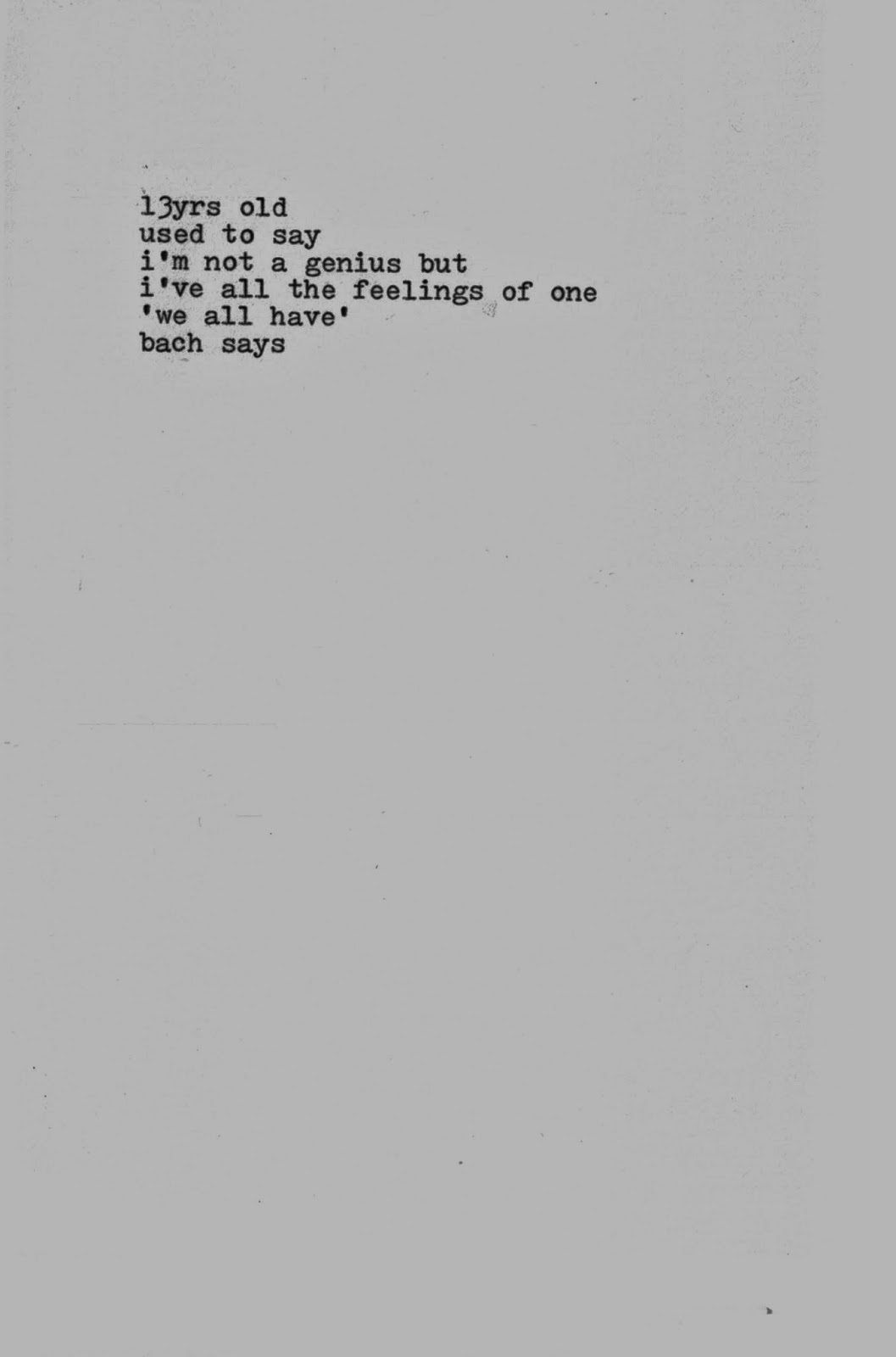 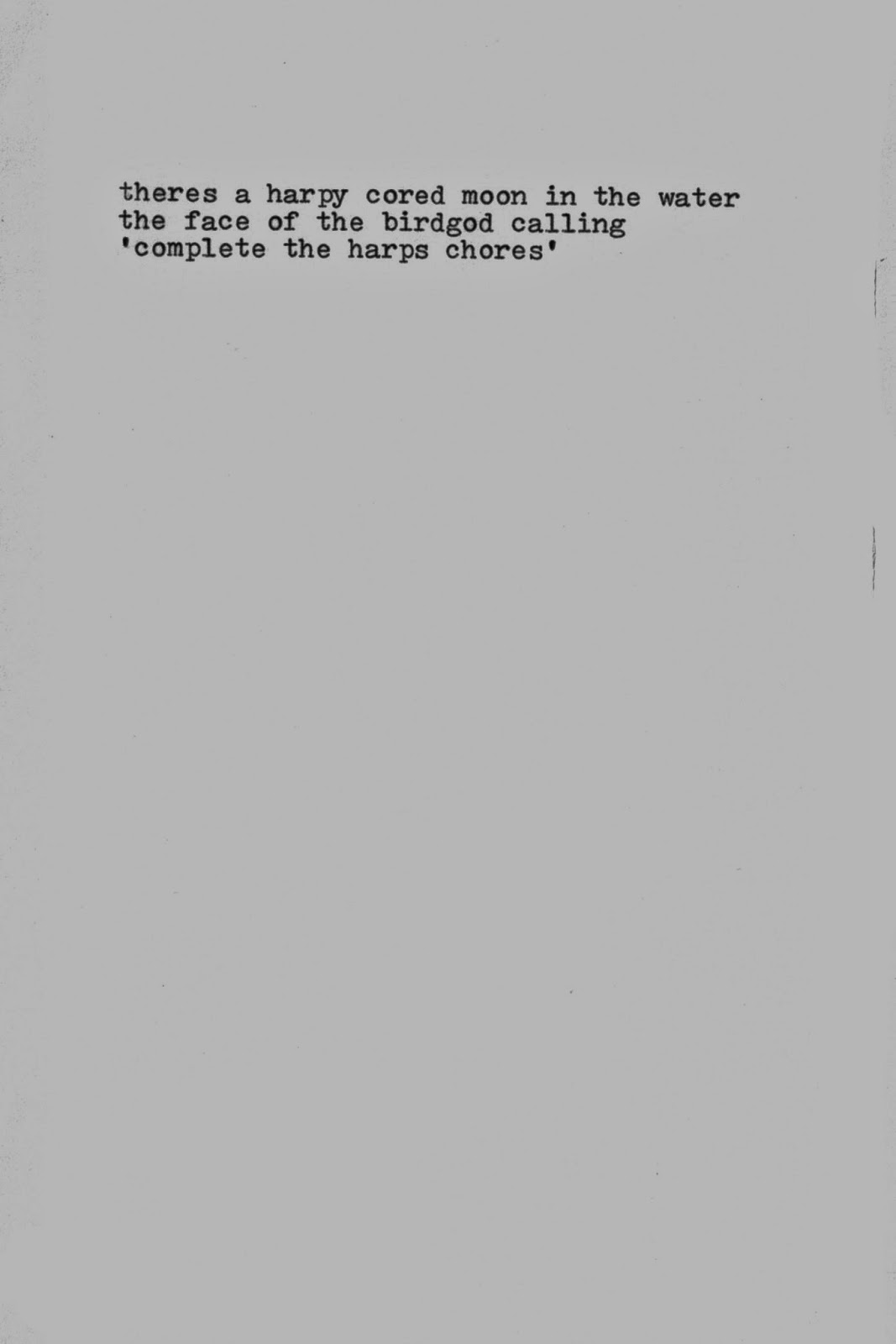 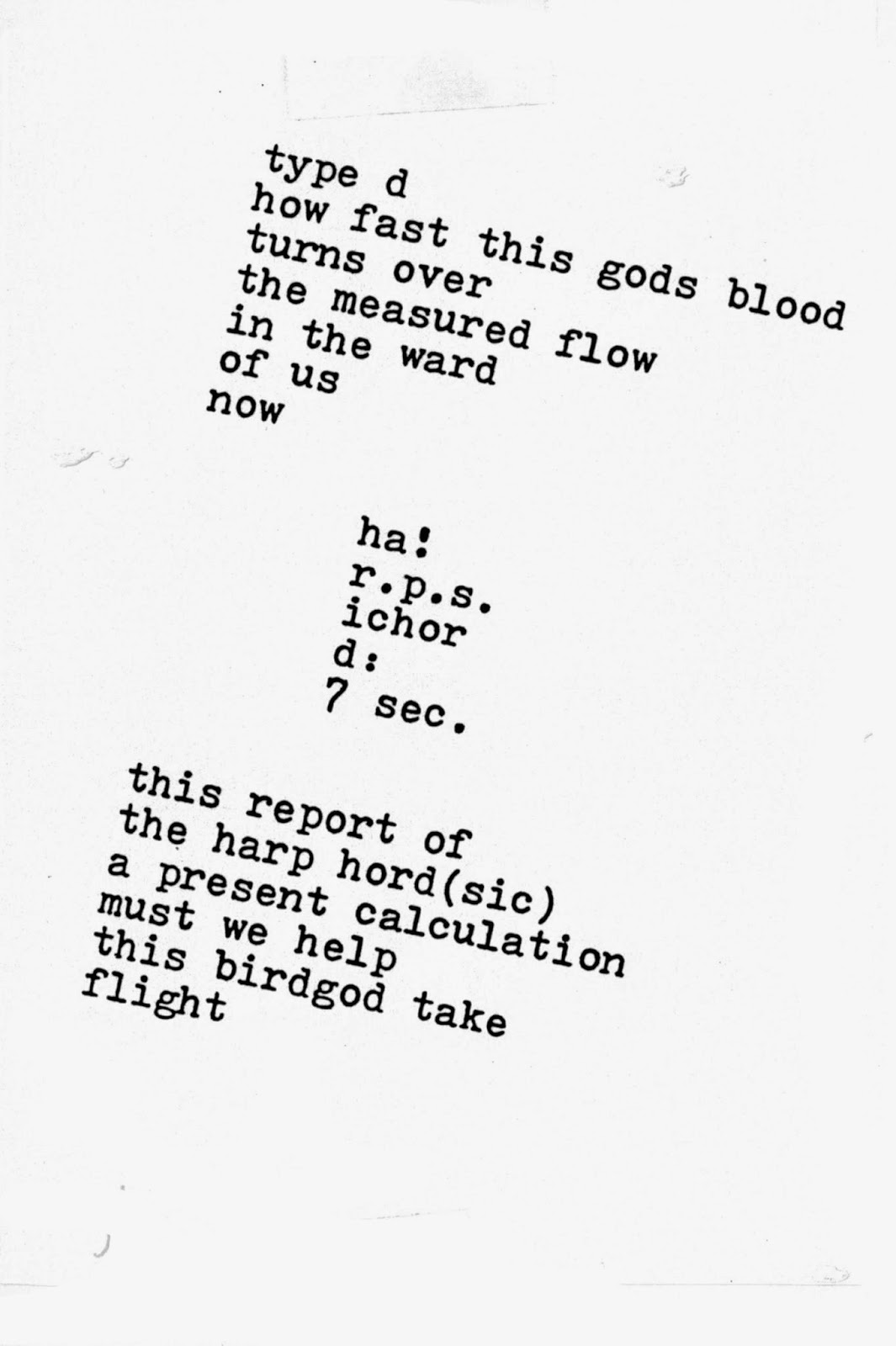 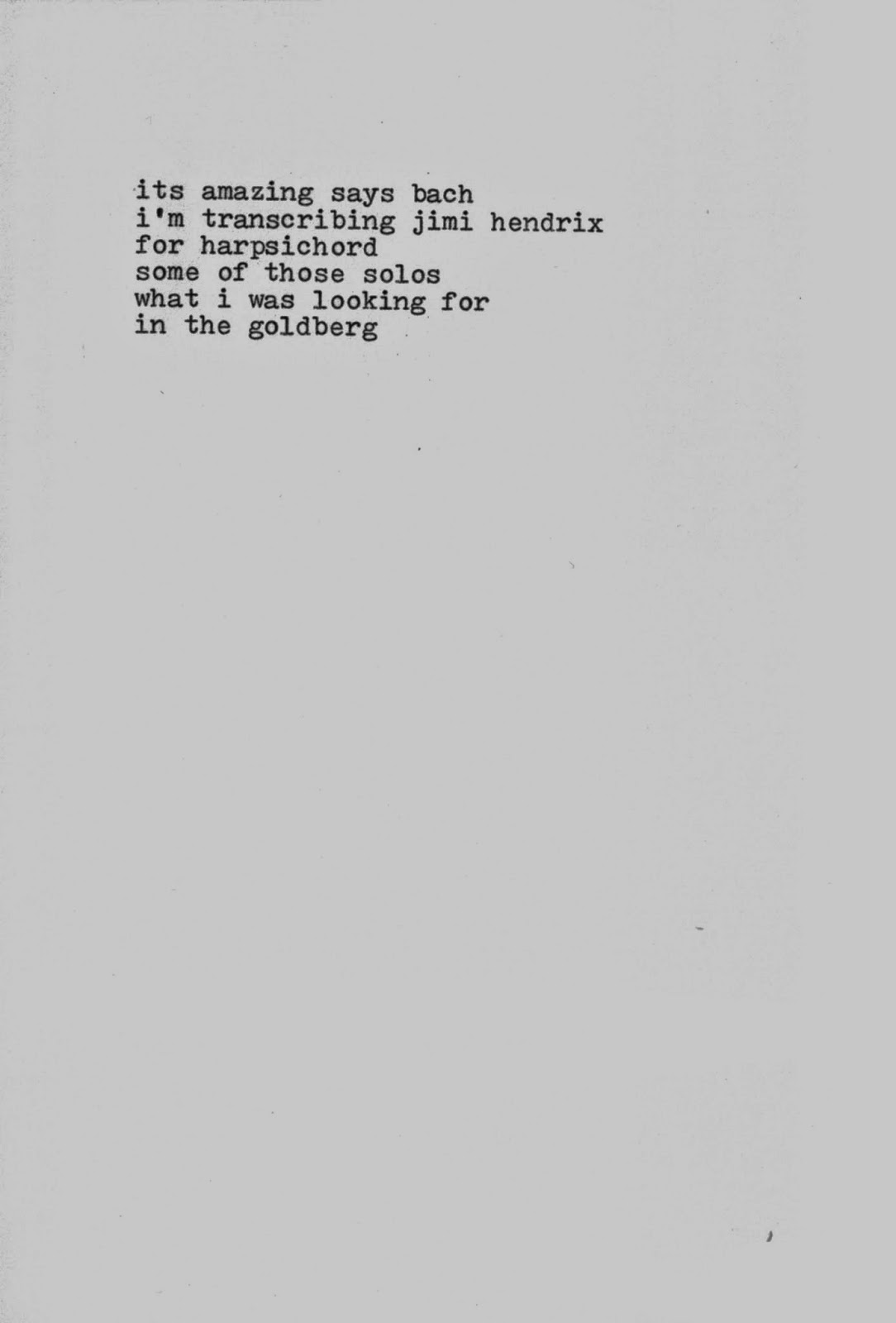 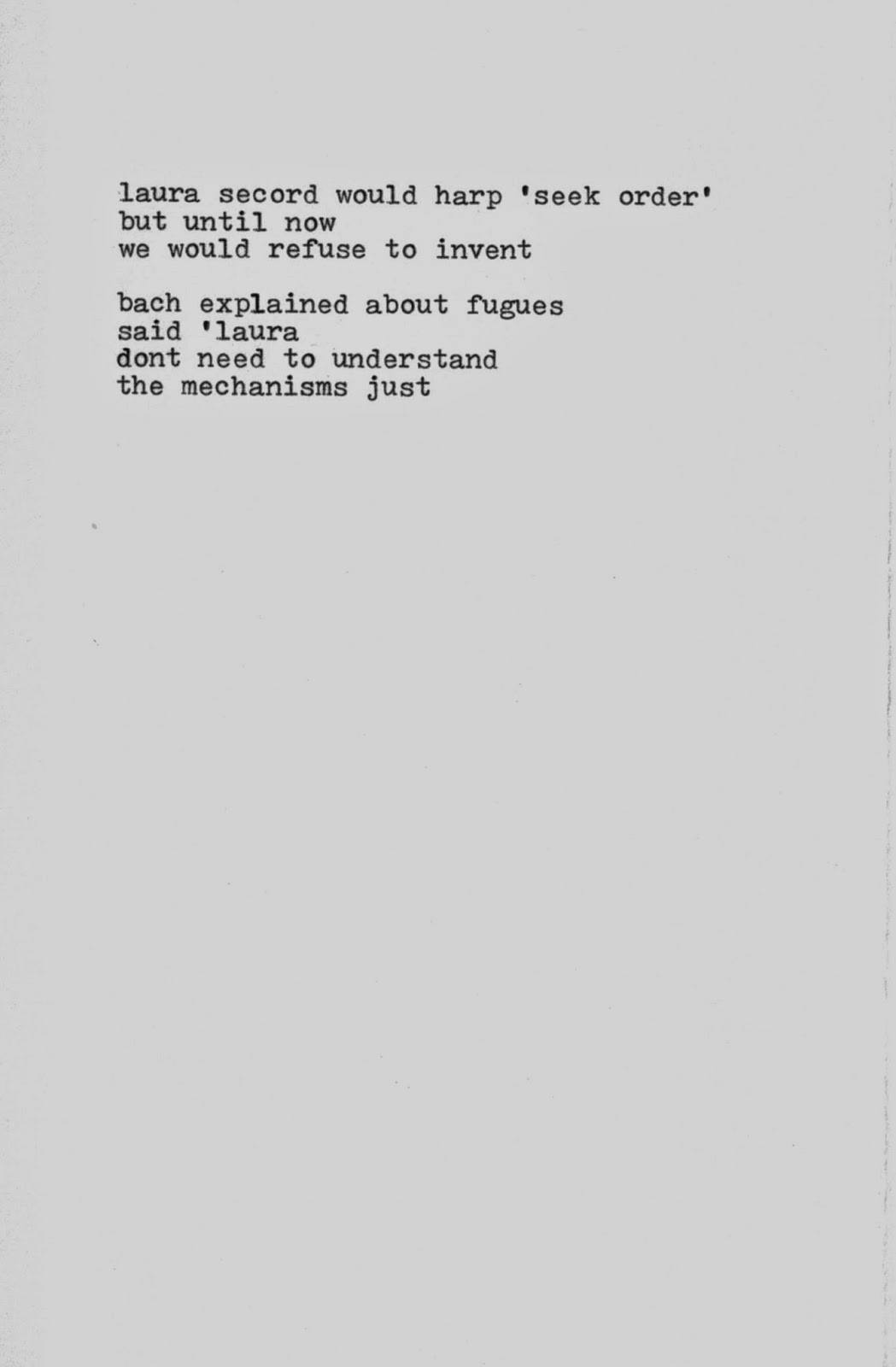 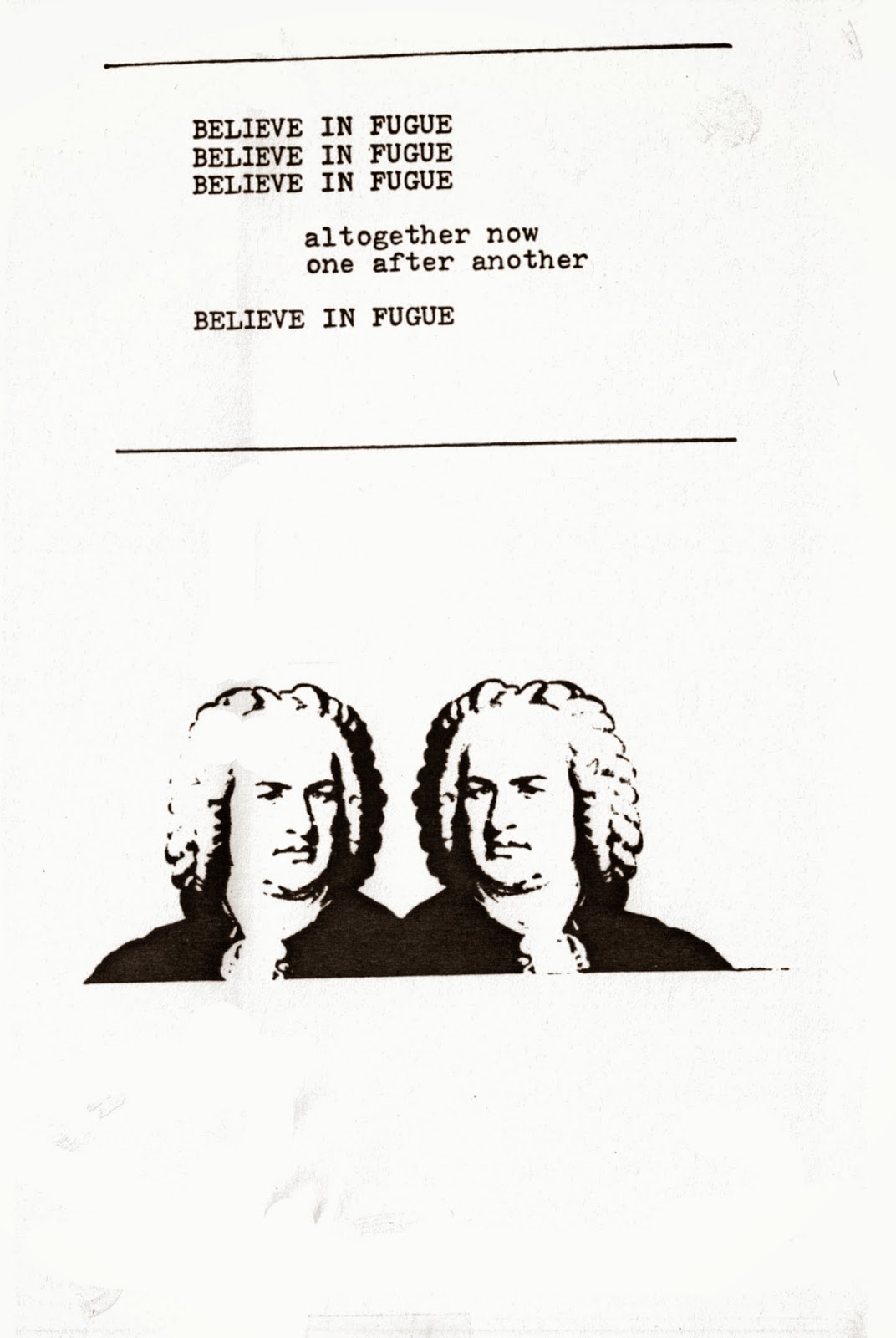 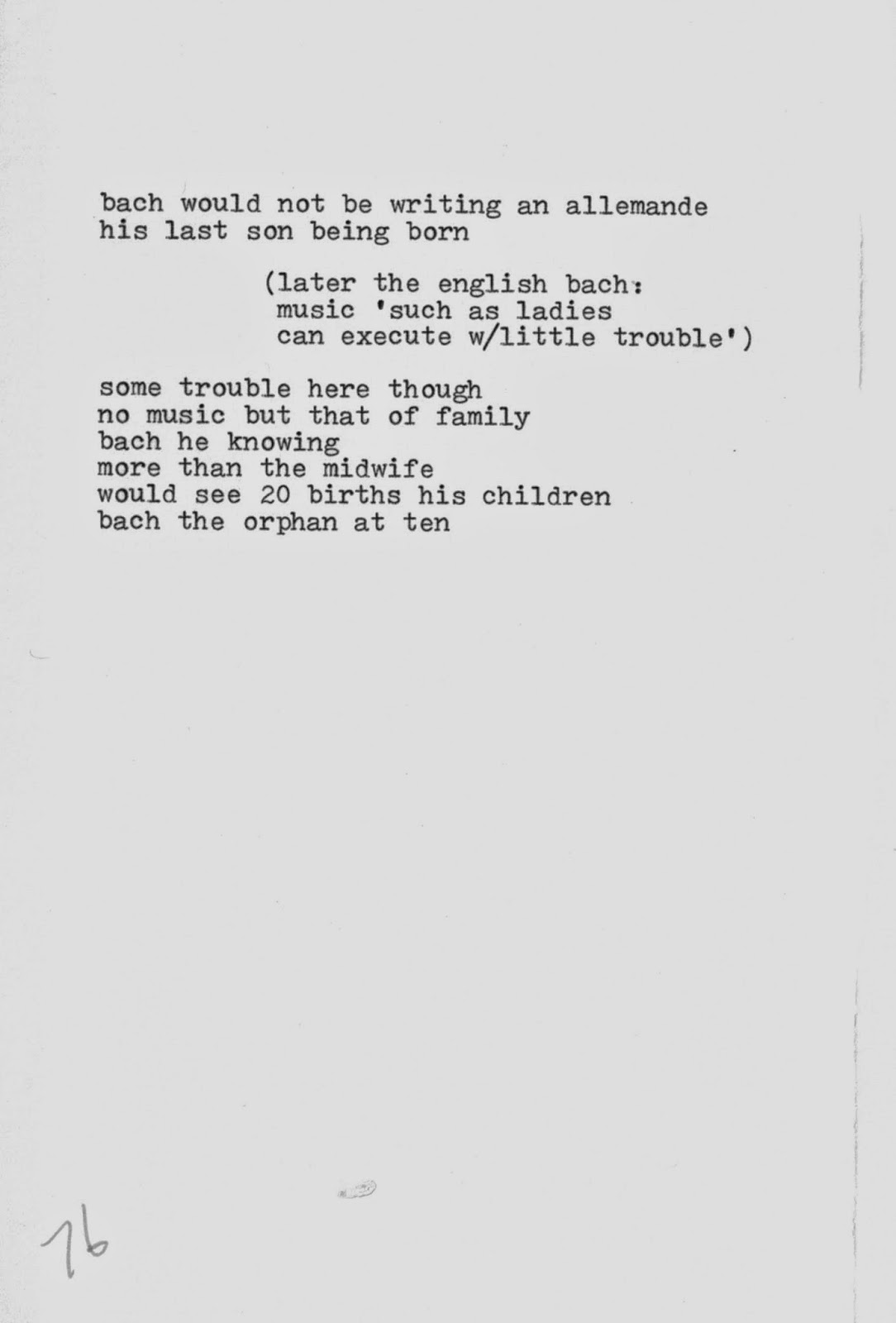 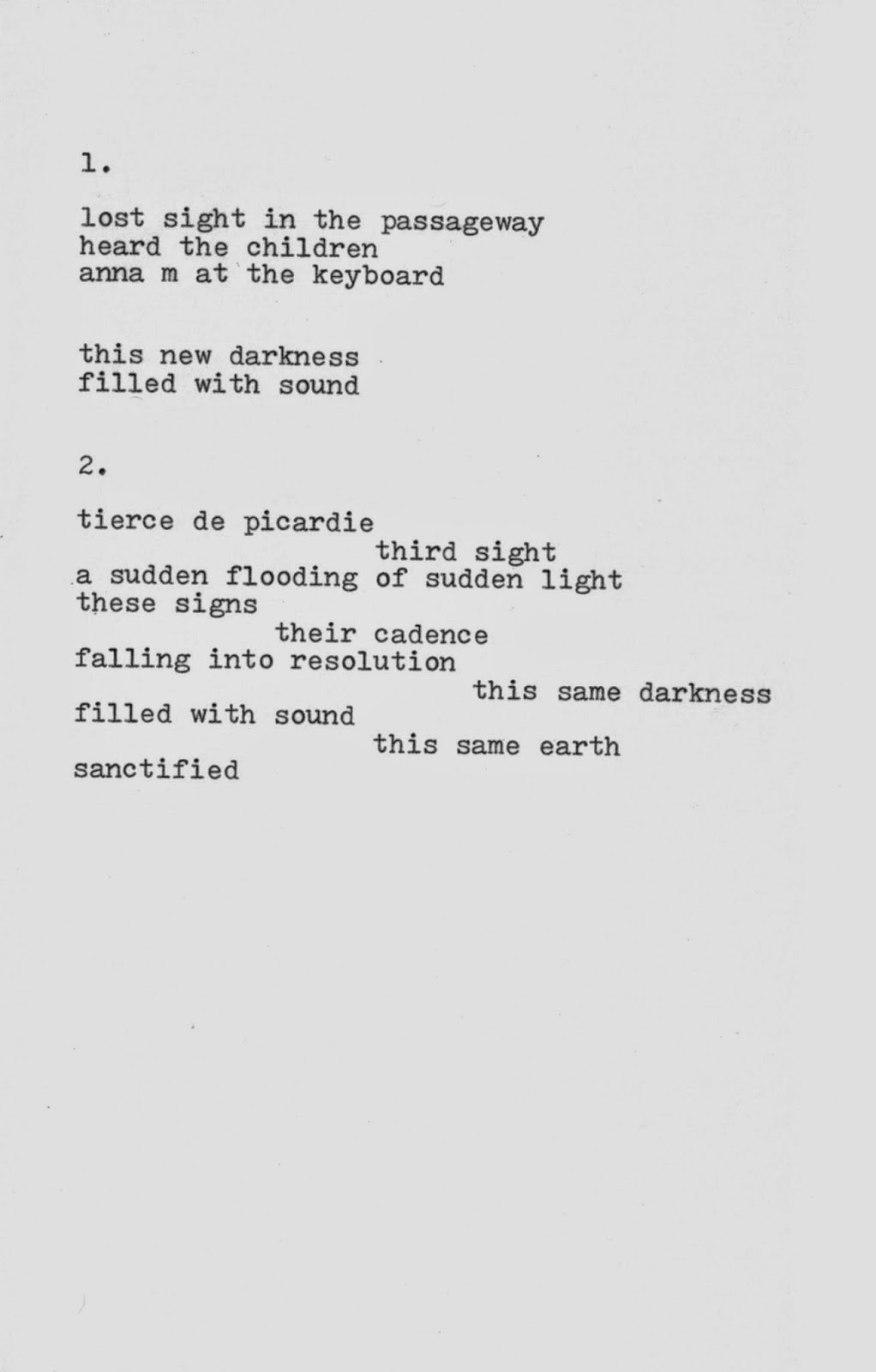 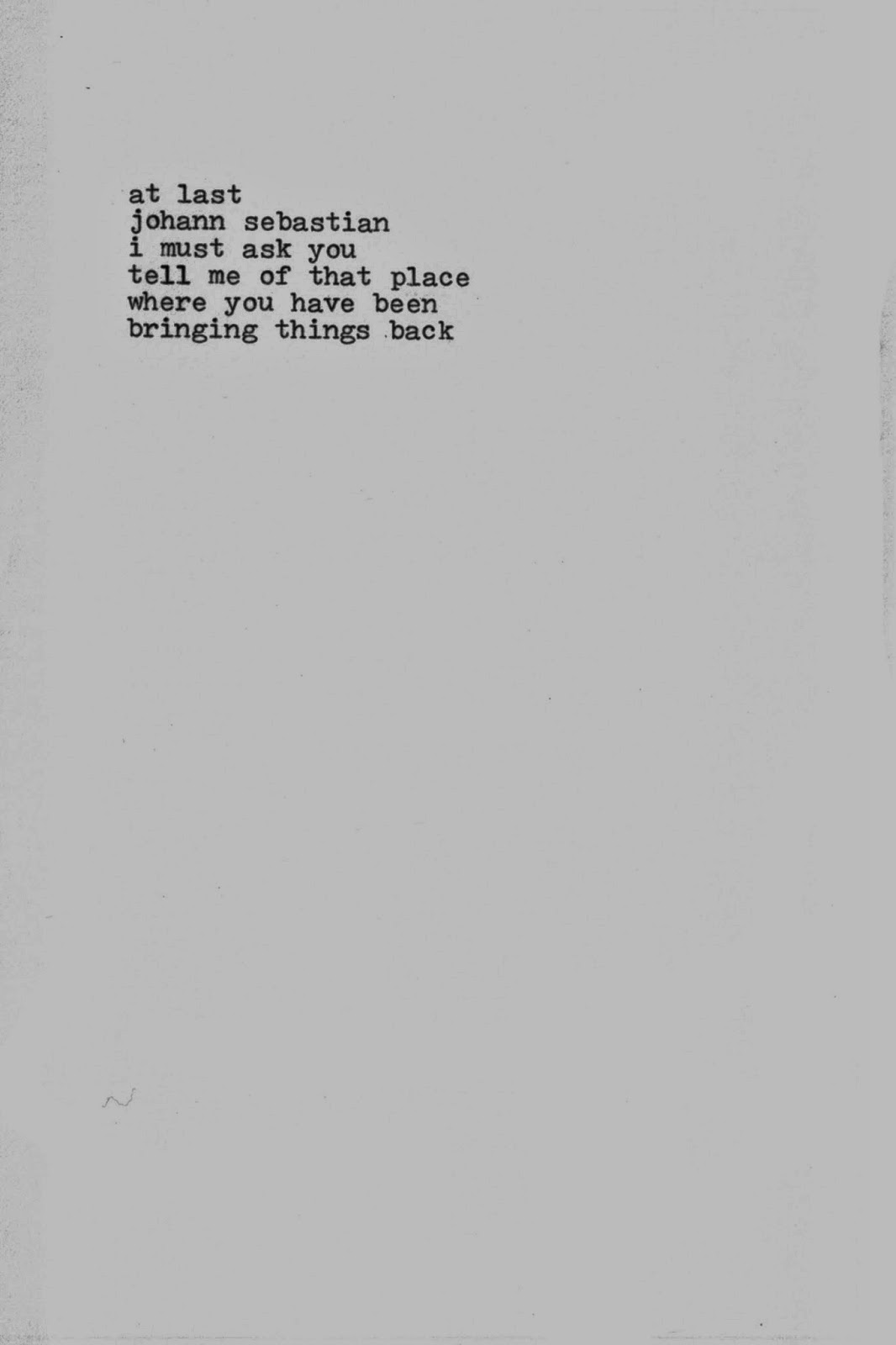 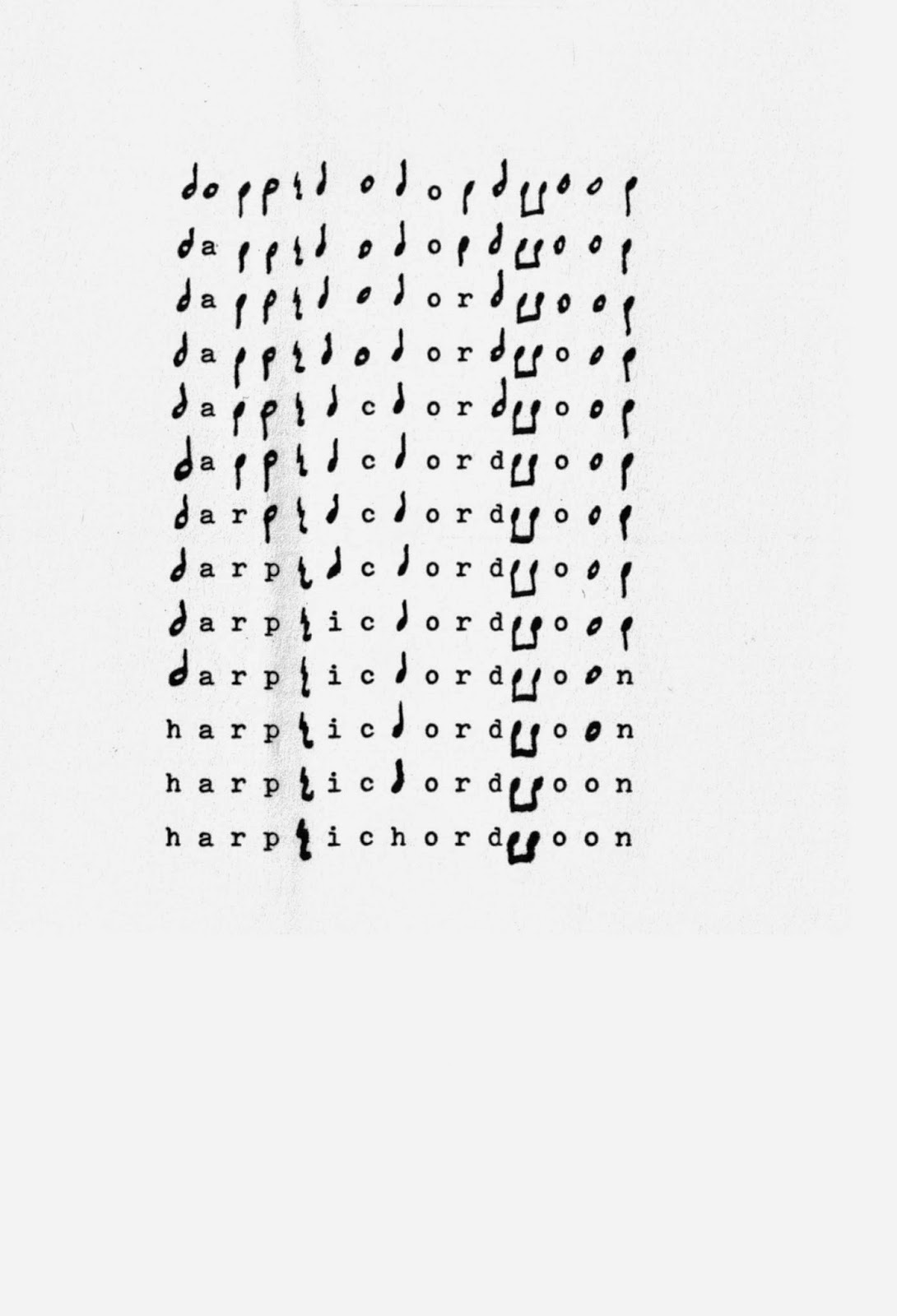 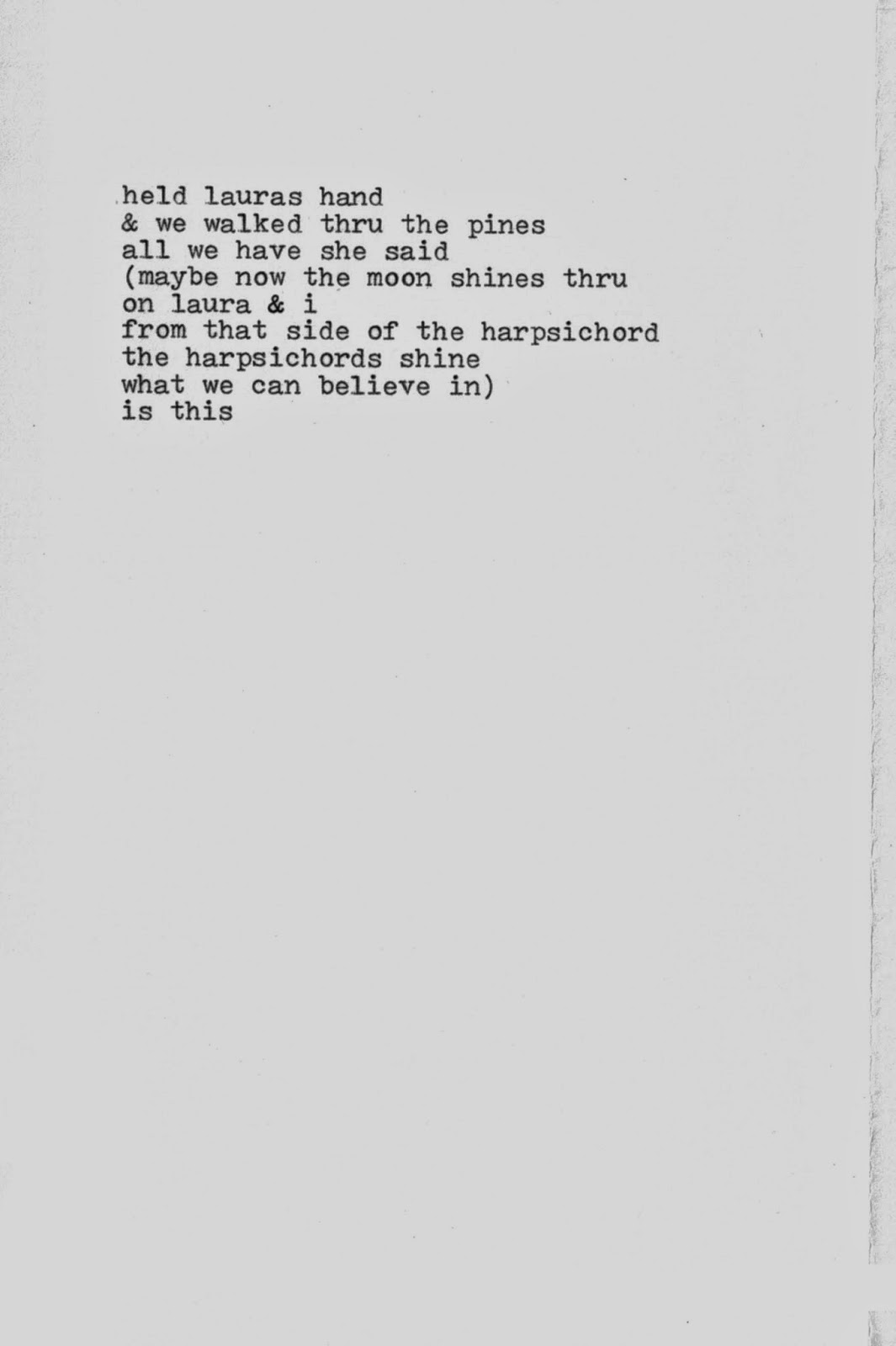 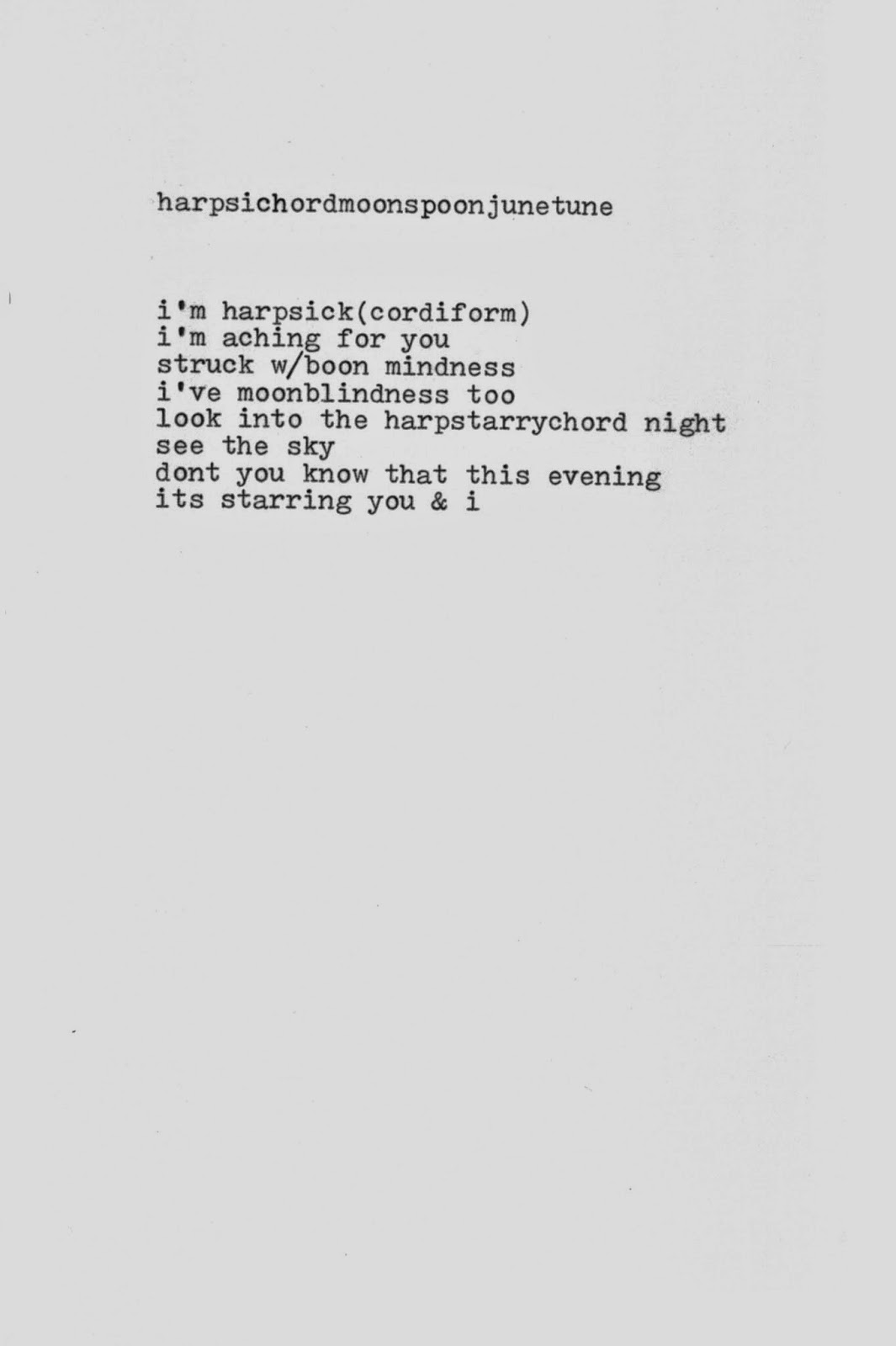 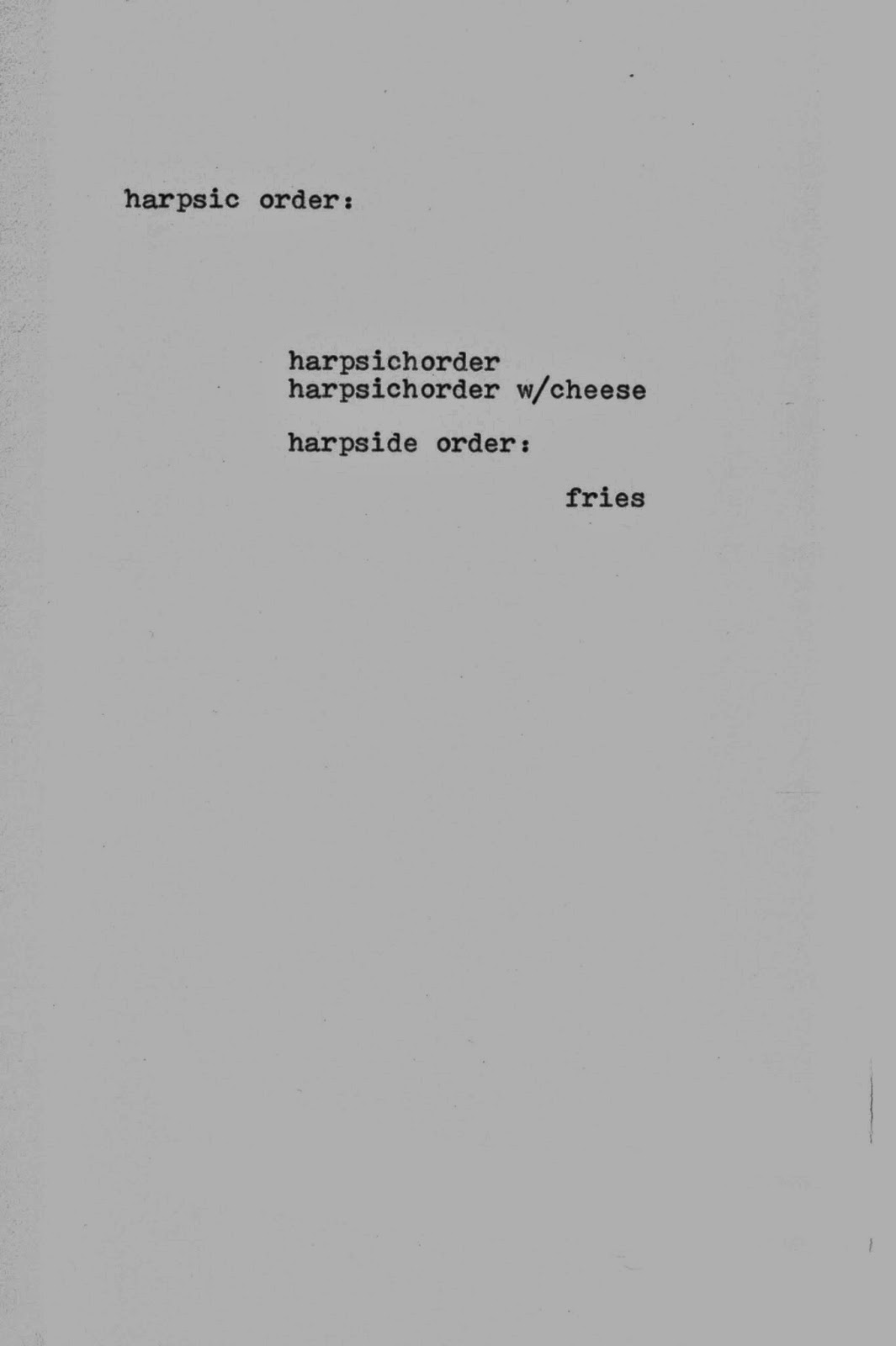 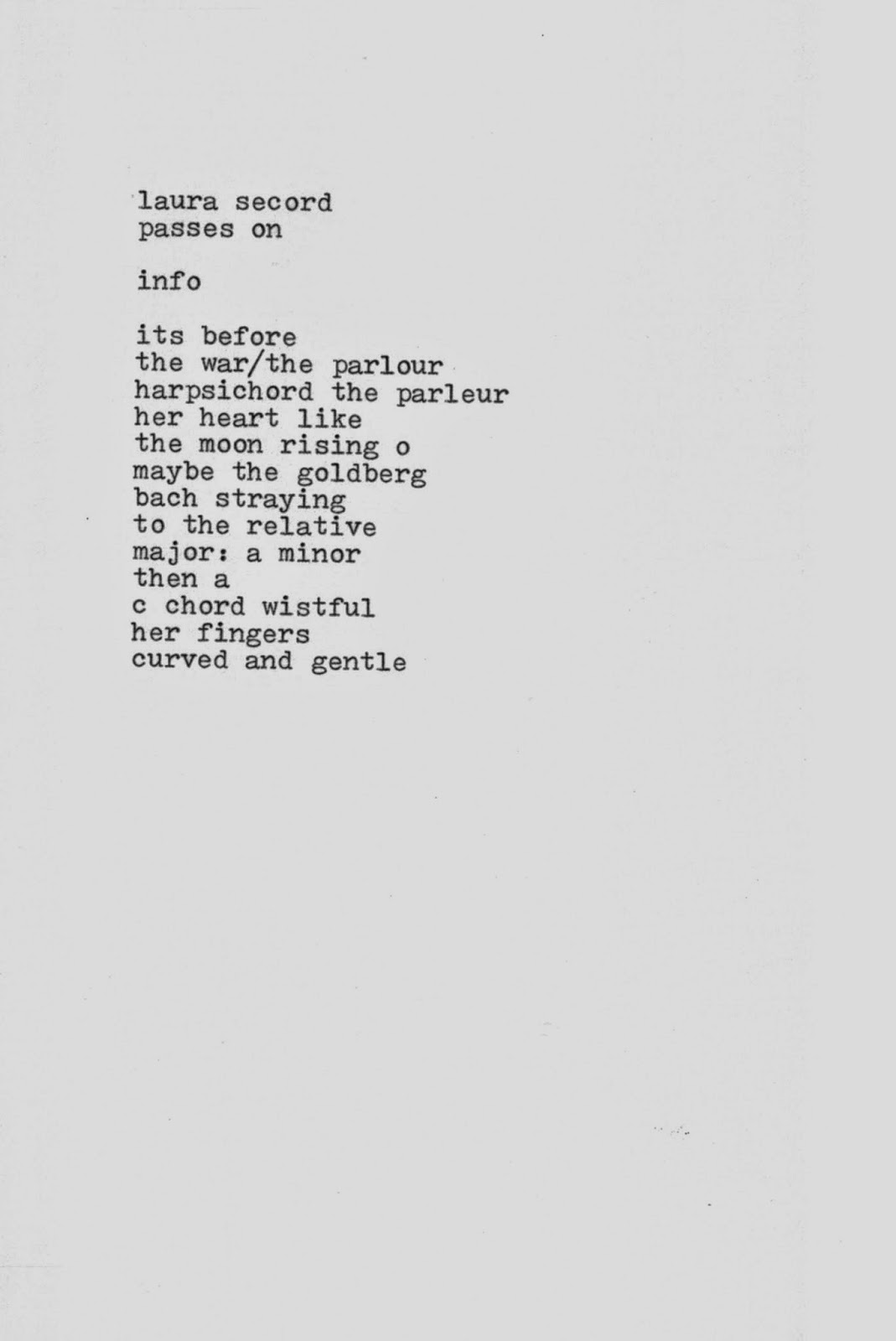 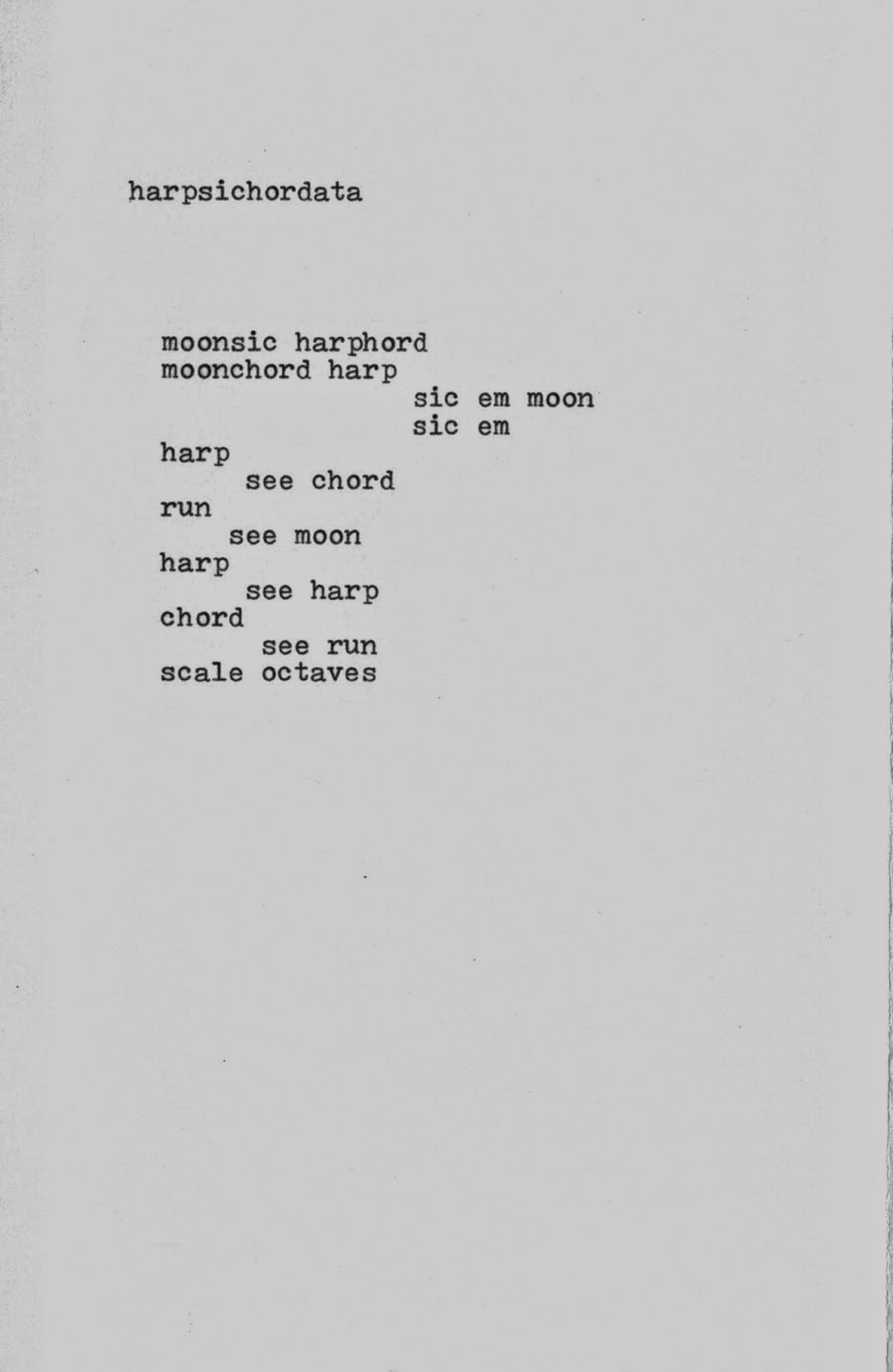 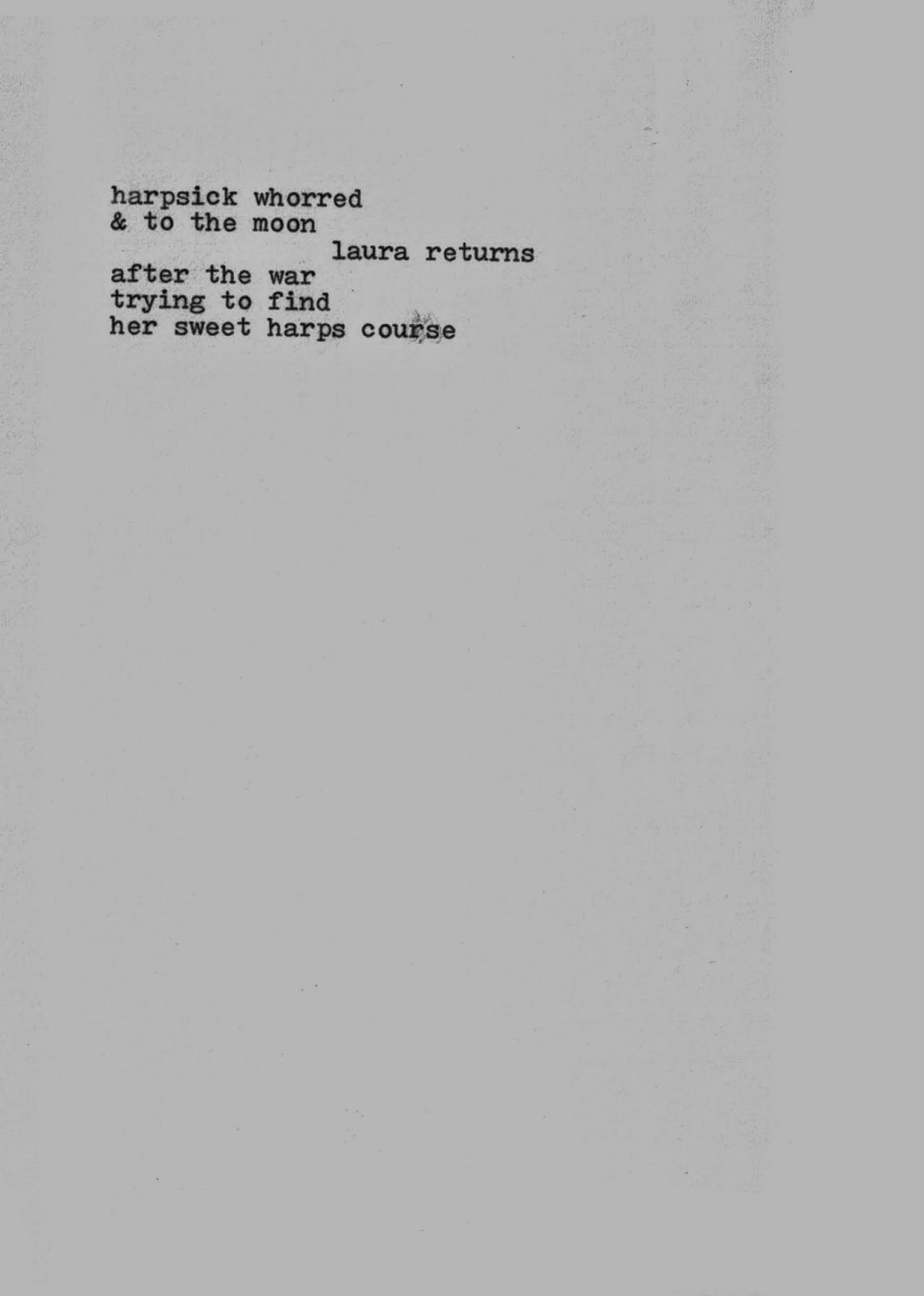 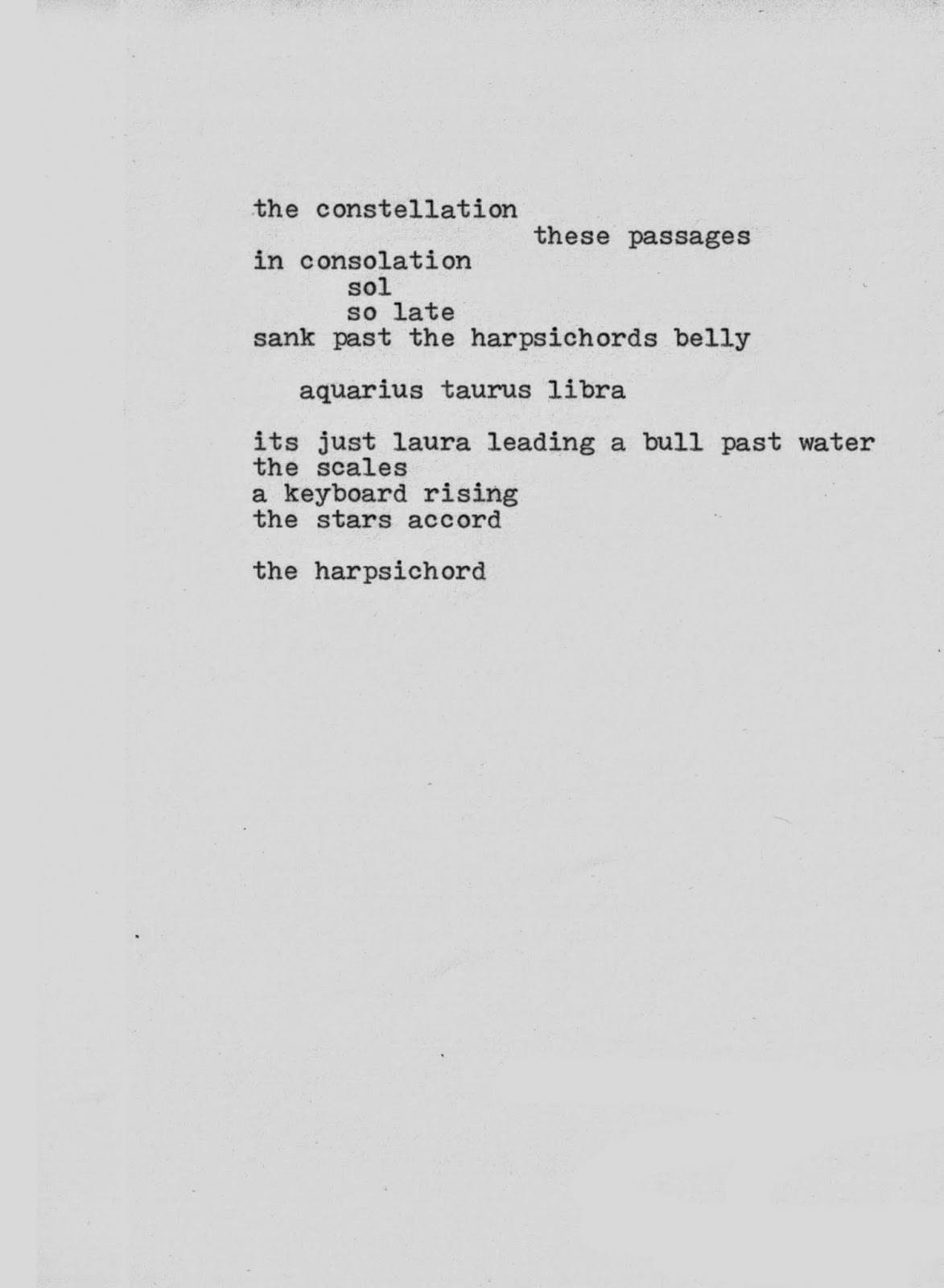 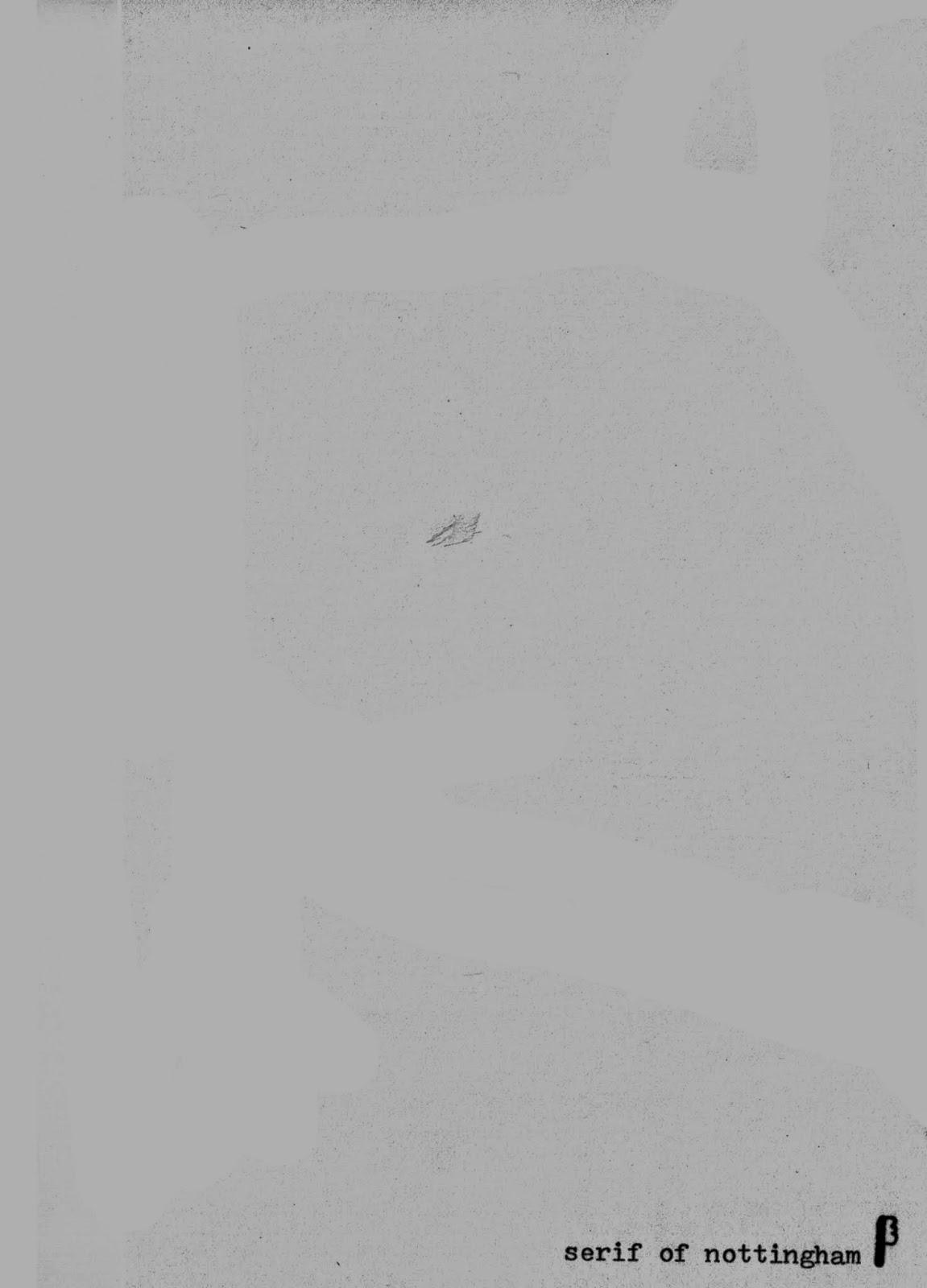 This is a receipt also from that time. I guess that the book was placed on consignment in a bookstore back then. I wonder if they ever sold, or if I were ever paid? [Update: I posted this image on Facebook and Charlie Huisken, co-owner of the very important This Ain't the Rosedale Library, a tremendously supportive bookstore for the small press, has identified that the signature on this receipt as likely his bookstore partner, Dan Bazuin's. Amazing.

Posted by gary barwin at 3:44 PM No comments: 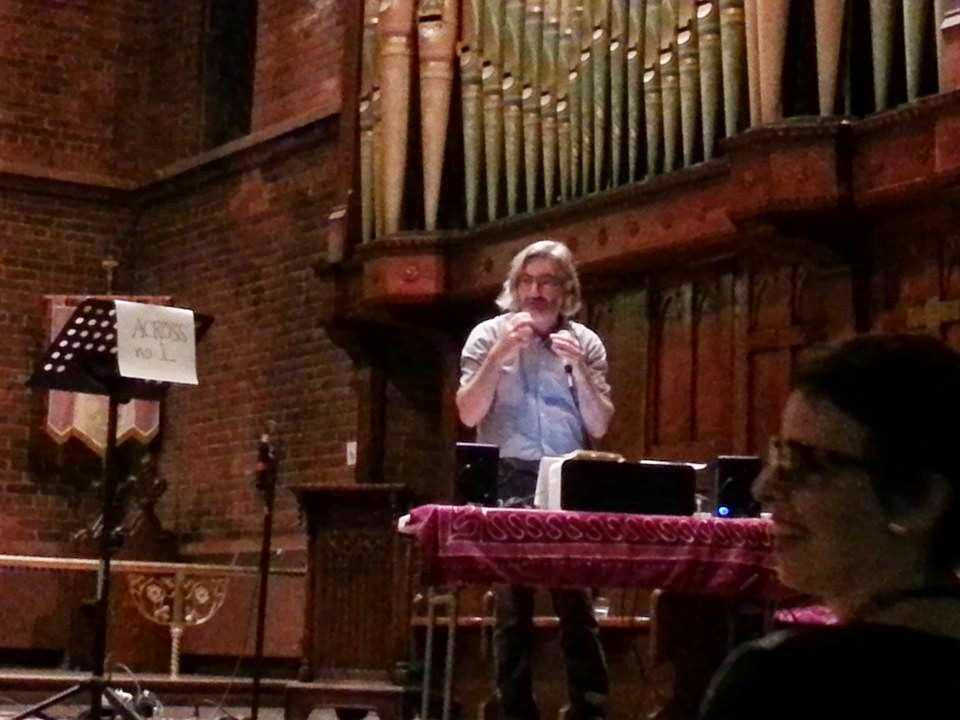 In this picture from my performance last night, I attempt to show those organ pipes who was boss with my massive desktop speaker system. They wept through their puny diapasons. But really, a great night of melted media, acrossnesses, possibility, and interplay. Plus Margaret gave a lovely shout-out and tribute to the memory of Richard Truhlar. Much thanks to her for initiating what promises to be a very inspiring new curatoreality.

I performed some pieces which used voice synthesis, spoken text with music, sound poetry with live digital processing (pterodactyls awking over priestly chanting), and a cappella poetry performance (though everything was 'a cappella' given that we were in the lovely St Stephens in the Fields church.)

A couple days before, I was on a little tour of Cobourg and Ottawa to launch my new Moon Baboon Canoe book, out with Mansfield Press. They were really lovely events -- great audiences -- warm enthusiastic and engaged, with lots of friends, families, and co-conspirators in the audience, particularly in Ottawa, and it is always a pleasure to read with David W. McFadden, one of my writing heroes. And Stuart Ross, our editor and MC, always makes it a warm and fun event.

I love when people review readings. Readings are a form in themselves—I think about them as a performance, certainly, and try to shape my readings as a formal unit, a 'suite' of poems and consider what I say and how I read/perform as integral to the effect, just as if I were contributing to a dance or theatre performance.

Readings aren't discussed enough, but Brandon Crilly was kind enough to write about our  Ottawa performance on his blog. Thanks! Here's the link. No, here: