November Round up: some things 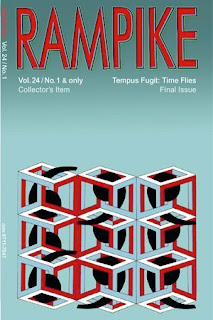 It was a happily very busy November. Lots of performances both literary and musical. But more on those later. Here's an update on some of the publication things that I've been happy to have been included in.

I'm really thrilled to have a visual poem on the cover of the very last Rampike magazine, Karl Jirgen's important and always exciting journal of innovative writing which has been going since 1979.

I have several new poems in Event magazine

I'm delighted to have a new short story (my first western) in the new comix issue of
Taddle Creek.

Hamilton Arts & Letters; Letters Magazine. Hamilton great and surprising online literary and arts journal has a bunch of great work up this issue. I'm very happy to have two of my poems which engage with other famous poems filtered through the Hamilton Naturalists' lists of local species as well as a webpage of bird sounds.

Here's a little piece I made using Gertrude Stein's voice recited her Complete Portrait of Picasso.

Posted by gary barwin at 3:06 PM No comments: