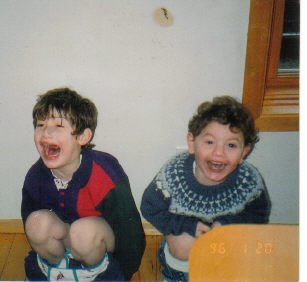 This is a picture of my two sons from ten years ago. Their pants are down and they are squatting. I thought that they were pretending to poo. My wife reminded me that they were actually trying to give birth.

Did they become the five and three year-old fathers of tiny humans scurrying across the floor?

Last night my son, aged 15, dreamed that there were doctors in the walls and that Muddy Waters had installed a doorbell in the drywall. 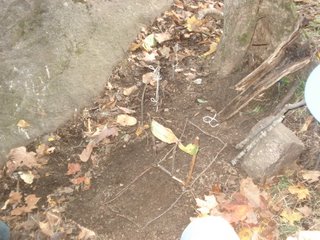 When I went with my Grade Six students to Camp Wanakita, we told them that there were leprechauns in the woods. We told them what signs to look for and how one must say ‘Top O’ the Morning to Ya,” to greet a leprechaun. We had them build tiny amusement parks out of twigs and leaves. I was horrified by how much they trusted us and believed what we said. I couldn’t help but think of pedophiles. I was shocked to have so much power, yet charmed by my students’ willingness to imagine and to believe.

I have an agreement with my 9 year old not to tell her mother that Santa doesn’t exist.

Sometime in the last ten years, tiny human children removed my wings and replaced them with arms.


I wait
on this chair
and I sit
how I wish


how I wish
I could talk


the children sleeping
the pavement cool
the night outside
Posted by gary barwin at 3:53 PM No comments:

promote your favourite word.
Posted by gary barwin at 10:14 PM No comments:

it is dark and soft

the world is a towel

a little priest raises his arms

he will speak with an open mouth

a glimpse of the planet

we mist the sky

with our blue plum lungs

make the heavens heron dark with our breathing

we fog the limits with spirit and our blue breathy sound

in each of us

lungs that are H

for we the people

to the air belong

for it is a pleasure and a surprise to breathe

in the far north

my son and I

lying in an intersection

when I think about

I tend to smile

we destroy a shipping crate

into the car and 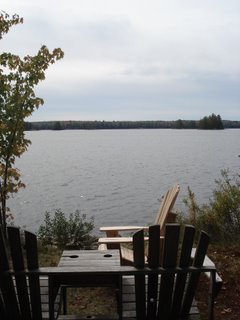 Every year, I have my Grade 5 music students write and record raps. They can write about whatever they want. We brainstorm many ideas, but I'm always surprised by what they come up with.

Last year there were raps about "If I were Headmaster for the Day," rap renditions of "In Flanders Fields," some strange Oedipal Starwars mashups, lists of favourite foods, sports, and a group of kids who were rapping cool about their peeps hangin' down in Ancaster.

And thus the poem written below., which I wrote when I was with them at Camp Wanakita where my school goes for a week for an eco-awareness/science/outdoor education experience. (More on that later.) I got to sit in a Muskoka chair on a point of land facing Koshlong Lake while the kids were writing in their notebooks in their "Magic Spots." The poem has nothing to do with the actual boy who is the municifent Fish of Rage, but I'm sure he would grant me the dispensation of using the phrase for greater literary glory.

O slotted henge for fish, fins brush your dials in love and wonder. Your pushed lever is set to darken all underwater with fire.

This in a lake far from the counters of the city & the fish of rage which slide the tarmac river: A narrow page of toast breaches the crenellated surface, dolphins in the new ears of morning, the long united ears of morning which say hurrah, hurrah. A square of darkness jubilant and remembering night.

Posted by gary barwin at 5:38 PM No comments: 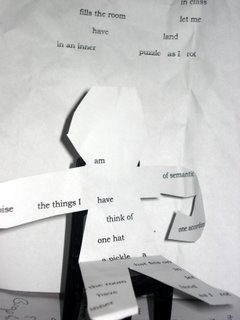 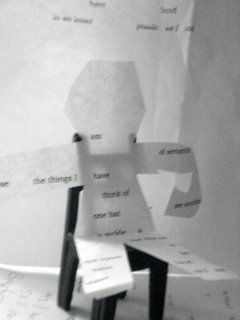 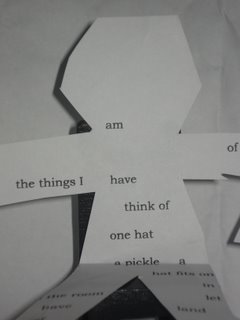 The elves have left my shoes alone in the night, however Plunderboy has been at work. Here are some images based on The Obvious Flap, a collaboration that I'm working on with Greg Betts.
Posted by gary barwin at 10:21 AM No comments: