Posted by gary barwin at 6:33 PM No comments: 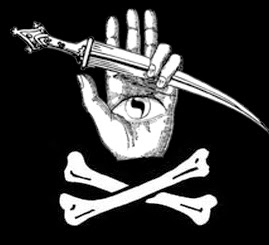 This speech, from my forthcoming Yiddish for Pirates (Random House Canada, 2016) is a paraphrase of the speech that Edward "Black Sam" Bellamy is reported to have given, at least according to Cpt. Charles Johnson's A General History of the Pirates
__________________________
thanks to Craig Conley for the image
Posted by gary barwin at 1:04 PM No comments: 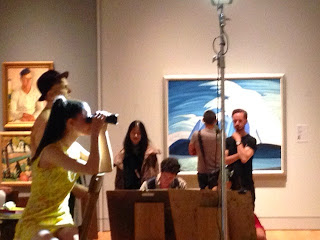 To Lukasik-Foss and I recently performed, along with live model/artist Tanya Hampshire at the Art Gallery of Ontario. Our performance riffed off the current Alex Colville exhibition. These snapshots show Tanya posing in the iconic "To Prince Edward Island" pose with binoculars.

Our performance was based on the concept of a drawing class, and indeed, there was an actual drawing instructor and AGO patrons sitting on donkeys (the art kind) with paper and pencils sketching us. Tanya actually works as a professional life model and she was remarkable in becoming vibrantly immobile. A living sculpture. 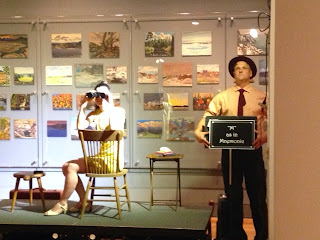 Tor and I explored a number of ways of disrupting the notion of being live model: We had changing silent-movie-style subtitles for the poses. I posed with a book which I intermittently read from (though always the same frozen page of Calvino's If on a Winter's Night a Traveller). Without moving, we gave voice to our thoughts as 'live models.' Tor delivered a brilliant monologue about being concerned that people would draw him with a big head. We screamed without moving. Yodelled. We thought of ourselves as channelling Wes Anderson films, themselves very influenced by the aesthetics of Colville. (There's a great riff off To Prince Edward Island in Moonrise Kingdom.)

It was a remarkable experience for me. Not only were we performing in the presence of Group of Seven sketches and paintings (see the Lawren Harris above) as well as Norval Morrisseaus, but the performance was somewhere between a performance art installation where we eschewed a dramatic perforative arc, but instead were some kind of live installation and an actual performance where we played with elements of performative drama and development. 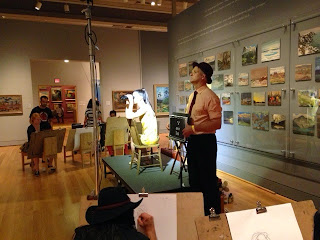 And here, the AGO brilliantly misspells both my first and last name in a bit of conceptual legerdemain.

My First Day as Writer-in-Residence at Western University

First day as Writer-in-Residence at Western: a grandmother from a small farming town (she'd never heard of Charles Dickens) brings in her life story. "My sister had wild black hair and liked to bite. It was how she dealt with what happened." And a grad student came in to show me mind-blowing visual poetry and to talk about post-conceptual poetry.
Posted by gary barwin at 9:23 PM No comments: 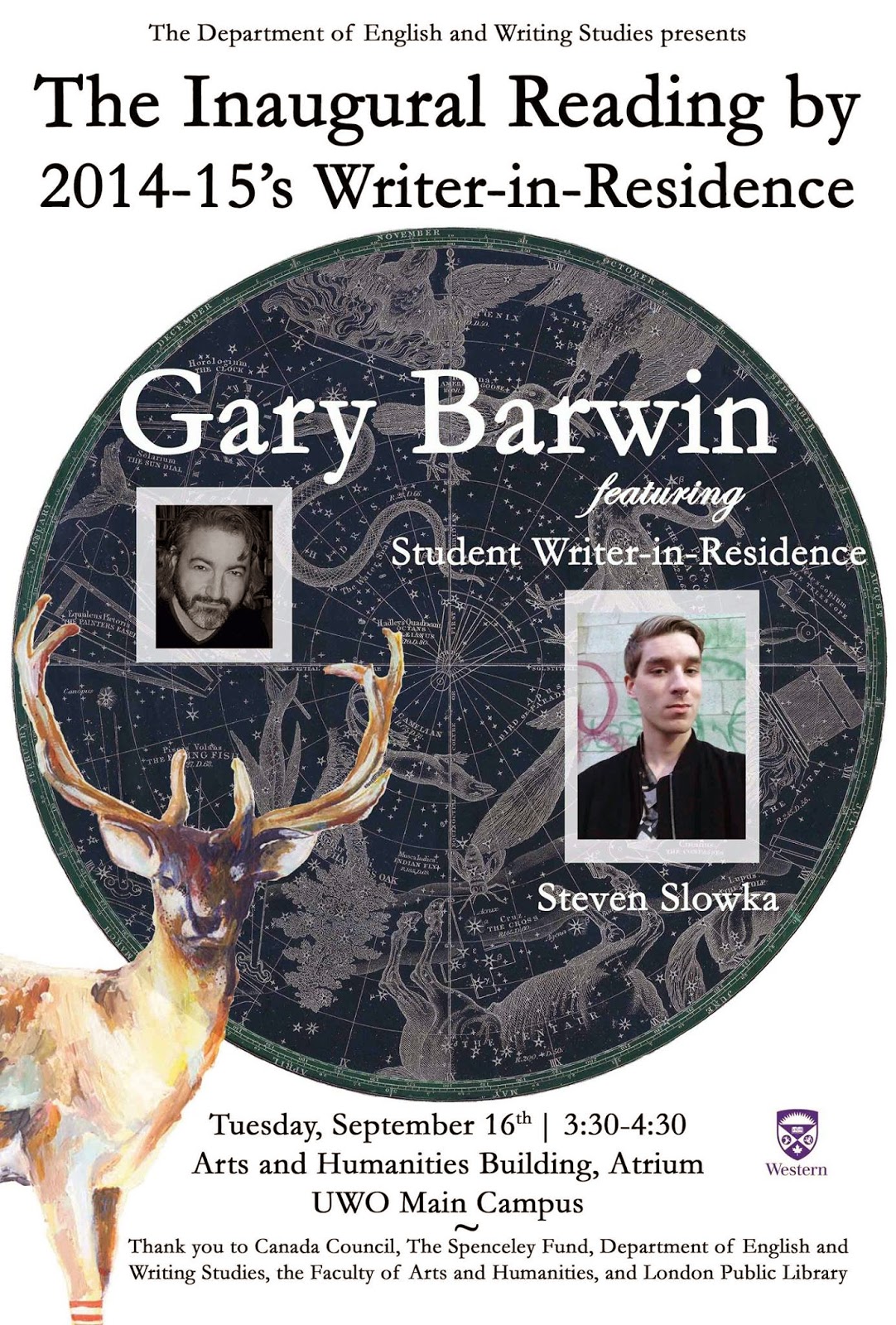 Astral Original of the Hebrew Alphabet 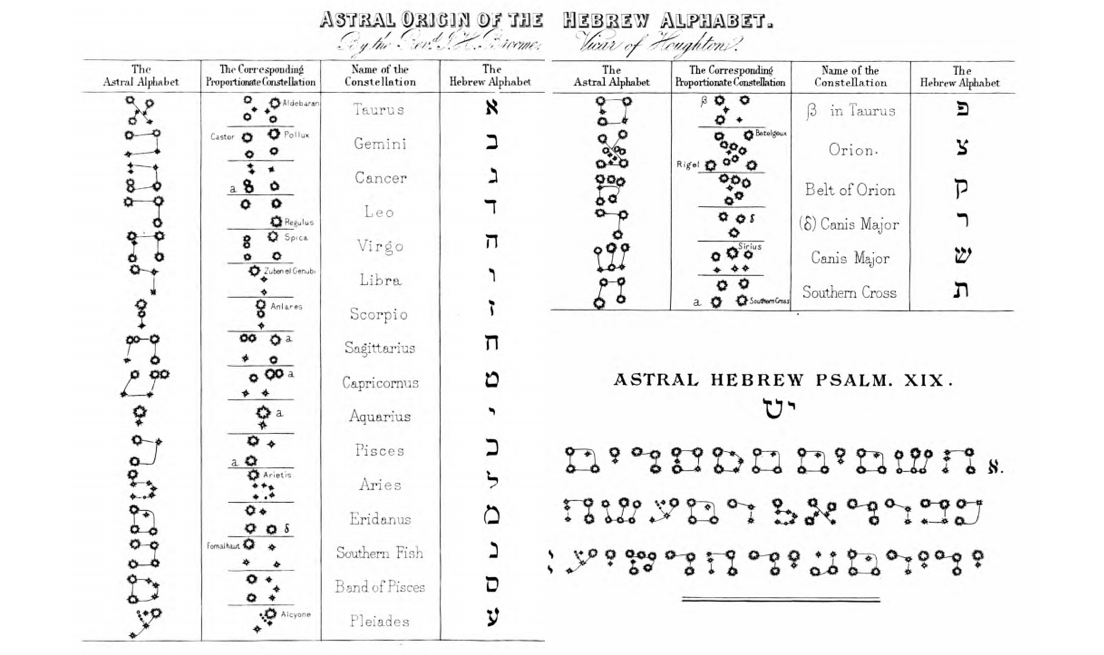 from the brilliant Writing System tumblr
Posted by gary barwin at 12:07 PM 1 comment:

Aaron Tucker has created this amazing site, Chessbard which translates chess games into poetry. You can play classic games, play a game against a chessbot, or modify games. The site then 'translates' the game into poems: both a White poem and a Black poem. Aaron has also written an essay about the project and its development.

I was delighted to be able to contribute to the site. I created some poems (by modifying a classic game) and wrote a discussion about what I did and about chess in general. Read it here.

And while you're thinking about chess, definitely check out the very lovely, Calvino-Chess Dictionary by Craig Conley. You can buy the book or read it online. I'd recommend the book!

Posted by gary barwin at 2:29 PM No comments: 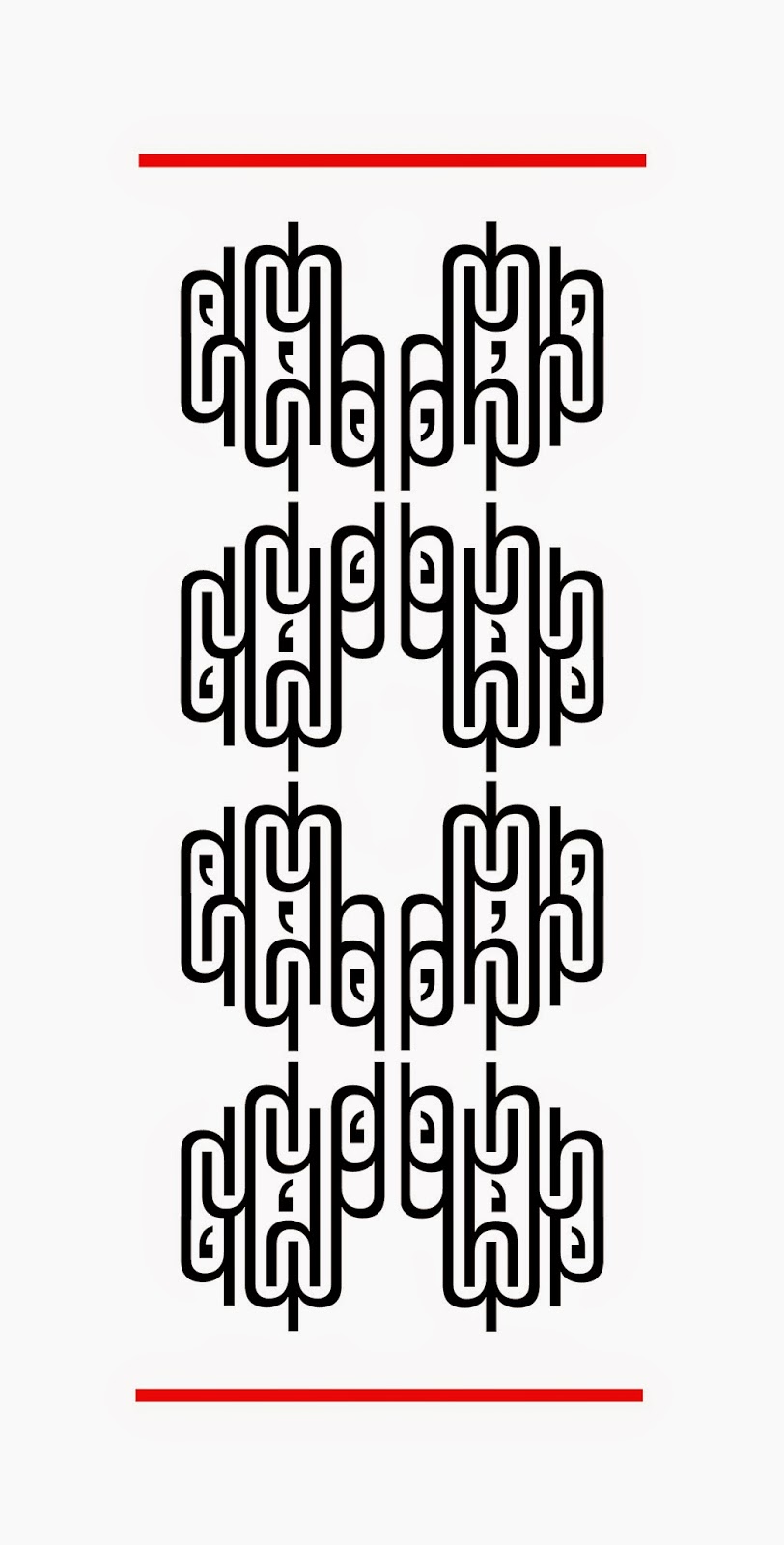 Posted by gary barwin at 2:19 PM No comments: 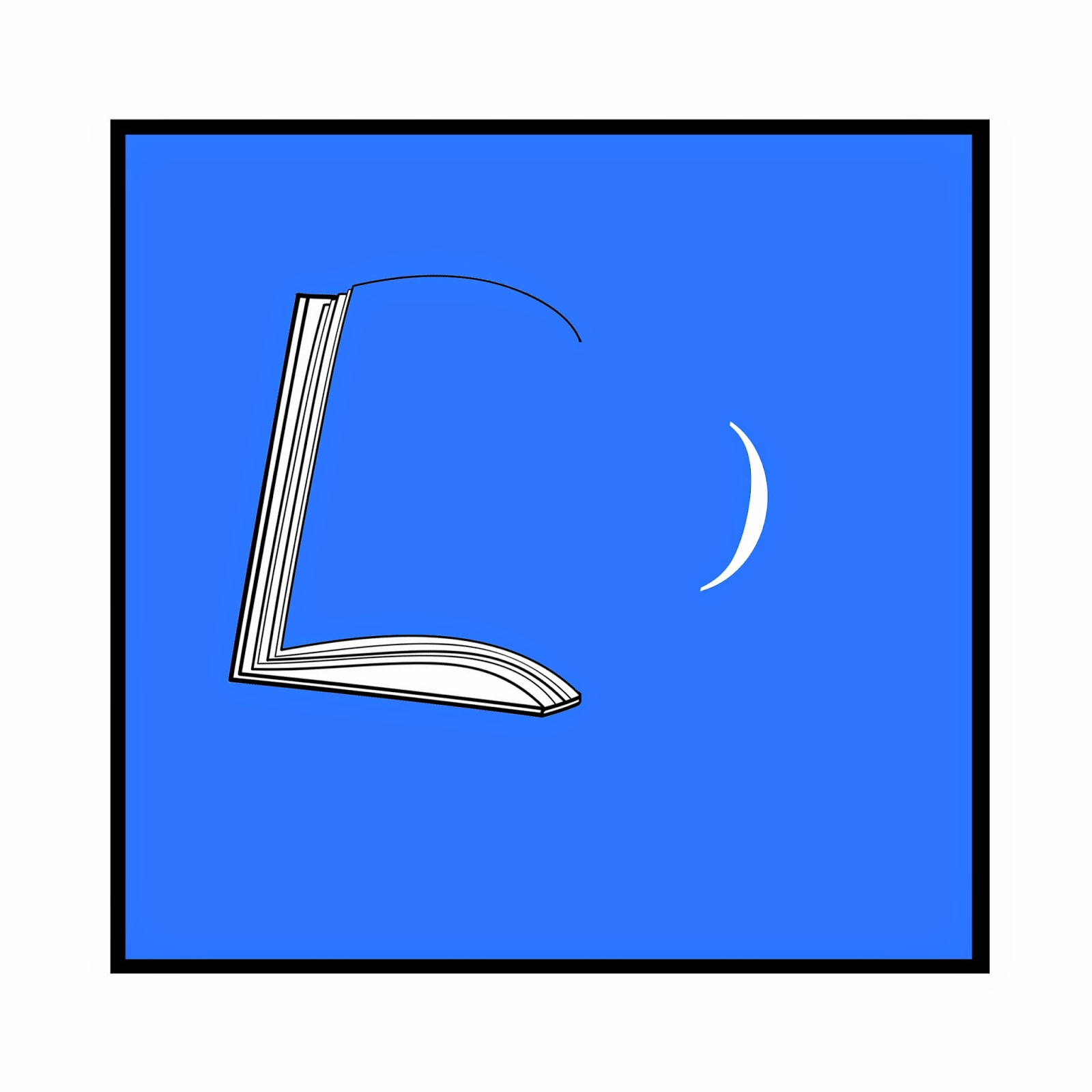 I've been thinking about this list thing. I’ve been tagged a few times to list the books that were my most influential books.

I think it might make my head explode and I just got this new haircut.

But I'm interested by the idea of what is an influential books as opposed to the books that I identify as the books that I think are 'the best.' Books by writers that made my head explode? From my late teen and 20s: Kafka, Beckett, bpNichol, Sir Thomas Mallory, Shakespeare, Chaucer, Calvino, Borges, James Tate, Stuart Ross, Dave McFadden, Ron Padgett, Mervyn Peake, John Cage, Tom King, Mark Strand, Chris Dewdney, Frank Davey, Maurice O’Sullivan, Gertrude Stein, (I know, no women…except Stein)

Borges wrote of his love for books which were clearly not what is usually considered 'first class.'
And what about books from my childhood: I read The Hobbit and Lord of the Rings as a young teen. It was years before I looked at nature except through Tolkein’s eyes: some kind of pan-European syncretic pastoral/romantic/medieval filter of story, loss, nostalgia, beauty, wandering, poetry, music, mystery, and notions of grand narratives (metaphysical, social, emotional, cultural, linguistic.)
When I was twelve, I read Kafka’s The Castle. I remember how vivid it made trudging through the snow on the way back from school. But it wasn’t metaphysical or existential alienation, it was rather a warm feeling of being in a story, of being able to conceptualize an experience larger than me (that snow was metaphysical, ontological. Epistemological, even.) I walked through the music of Kafka’s language. I didn’t need to get into the Castle like K. I was happy wandering.

I read The Hitchhiker’s Guide to the Galaxy. A brilliant collage of references, parody, bathos, science, and metafiction. Remarkable savvy, timing, quick witted play with a variety of tones. The sense that, Quixote-like, a text could play against itself.

And Seamus Heaney and medieval writing. The palpable physicality of language. A kind of peat (I often smelled peat in fires as a child in Ireland.)The inspiration of language and a world that was profoundly other but yet whose texture, light, weight, heft, I could feel with my fingers or my mouth. Its rhythms in my body. I'd say this about the synagogue chanting, too.

In high school, Mark Strand did a reading and workshop in our class. That was another music. A lightness. Fables. Simple language made silver, lunar, parabalistic, yet witty. Then first year at York U., and bpNichol introduced me to what was possible. Writing could do what I knew experimental music could. And art. Compassion. Play. Graffiti on the fourth wall. Invention. Humour. Continual re-invention and exploration.

This is about all I can say about my ‘influential’ books without writing a 100 page essay on reading. Influential books: it’s like naming influential breaths. Sure, I can identify some, but…
Posted by gary barwin at 2:21 PM No comments: