MONSTER BRAINS and a LITTLE HAND 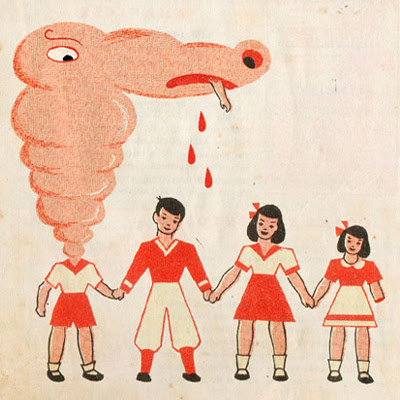 A remarkable, if disturbing, picture from the Argentinian Maxi Lunchini.

This, along with many other fantastic images of the fantastic (various representations both modern and historical of "monsters") can be found at Monsterbrains.

The mysterious inspiration and mystery of revulsion and the horrible.
Posted by gary barwin at 12:52 PM 1 comment:

The Barwins Go to Cuba 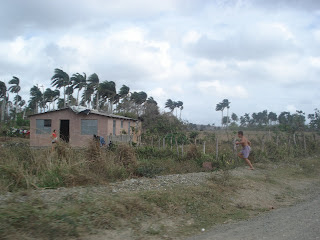 Did you know that the US once hatched a plot where they were going to put dipiliator on Castro's shoes so that his beard would fall off? 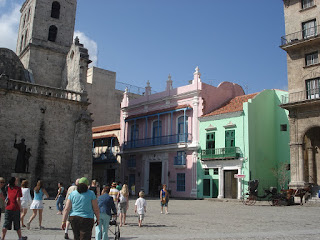 They also put poison in some cigars that they intended him to smoke. 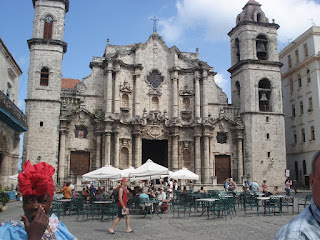 They knew the cigars would work. 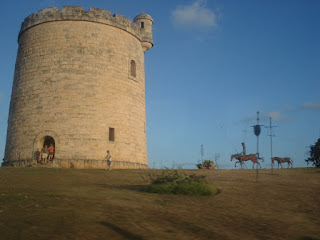 They'd tested them on monkeys. 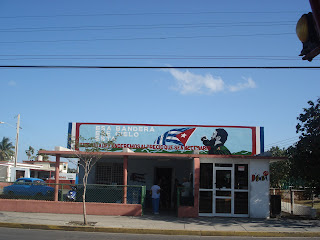 We were in Cuba for a week. 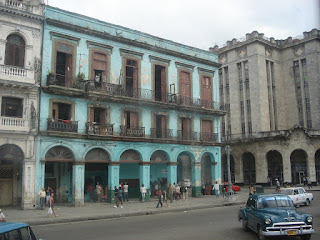 My son was wearing his baggy jeans down low so that his boxers were showing. 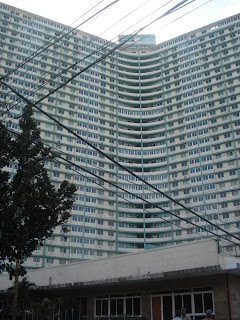 This Cuban guy walked up to him and said, "Your ass is outside." He yanked my son's pants almost up to my son's armpits. 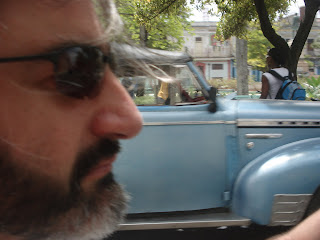 We went snorkeling in a lightning storm. 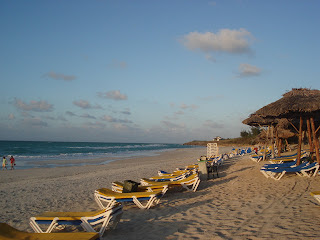 On the way back, the boat began to sink. 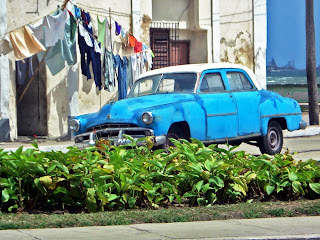 My son was bitten by a donkey. 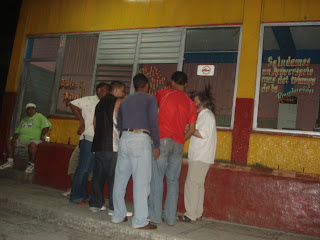 But it didn't hurt. 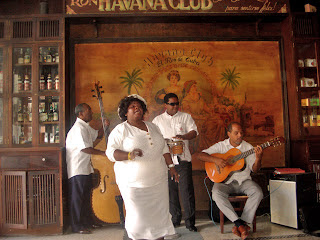 We swam in a cave. 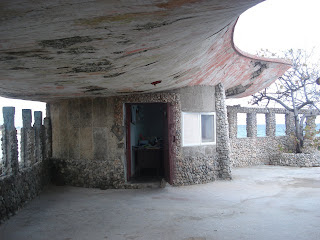 It was astoundingly beautiful. 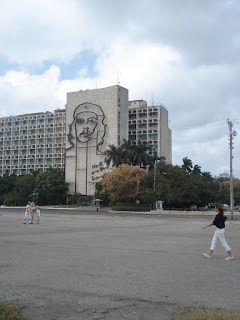 We took no pictures.
Posted by gary barwin at 9:43 AM 1 comment:

THE FABULOUS SQUIRREL OF LOVE 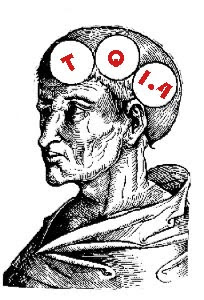 The sound files were entirely created with a text-based voice synthesizer, which means that I typed in text and the software generated the voice. This particular synthesizer was from a program (Crazy Talk) which is designed to make faces appear to speak using software which synchs the audio file to an animation program. The animation program provides a template for eyes, mouths, and other facial features which move when someone is speaking. Of course, part of the fun is to subvert the original use. When you feed the text generator letters, word fragments, punctuation, etc it can generate rhythmic effects and 'sound poetry' like sounds. I then took the generated files and assembled them in Sony's Acid software.
Posted by gary barwin at 3:19 PM No comments: 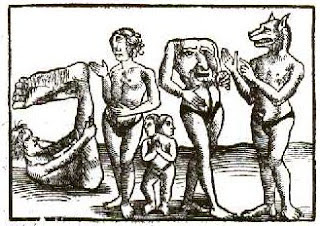 the snow was like clarinets
and inevitably, the Monopoly board of the groin
is hotels, the Balinese monkey chant, and a Shih Tzu
gnawing through gravestones and a macaroni-salad Inukshuk

yes, a spoon in the eye, Doctor, I’m two tents
hovering over the ground since someone’s pulled up stakes
please insert your Italian quotation here
for inside every bedframe there’s another bedframe struggling to get out

receding despite the birds’ flap and floss
in the blue of the brain where
the last teeth are no longer planets
Posted by gary barwin at 9:32 AM No comments:

my son goes into the ground

what connects us is only
this rope

an armful of cuts
my son’s and mine
turn like leaves or birds
become scars
Posted by gary barwin at 1:57 PM 1 comment: 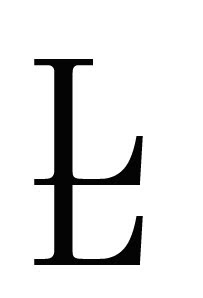 A saxophone has an octave key. It allows you to play in two octaves. Once I borrowed an electronic saxophone. It had five octave keys. There was the exhilaration of jumping up an octave, and then another and another. As if I could leap through the clouds and find new worlds, and then new worlds, and then new worlds. Cerulean. Sur-ulean. More real than real. Beyond duality. Notes beyond the fanfares of imaginary trumpets, their names spelled with letters more capital than capital. Past miniscule & majuscule: megascule. Writing large writ large. Orthoscendant. Ontographic. Transalphabetic. Like shouting so loud it becomes geologic. Writing as geographemes. Nouns so proper they enter philosophy. The ascension and then the ascension again of the capital. 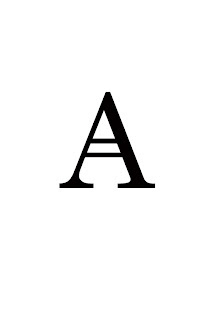 I write words with these letters and the tax department trembles. My sixth grade teacher weeps and then runs through the school reciting last week’s spelling list.

Trees move away from me when I write return addresses on envelopes. I make basements and rain with this alphabet of letters beyond letters,

Letters only angels could spell. Hovering over our alphabet, yodeling songs above hearing, writing a cursive of clouds, hyperscule, a greater than of poems.
Posted by gary barwin at 9:10 PM 1 comment: 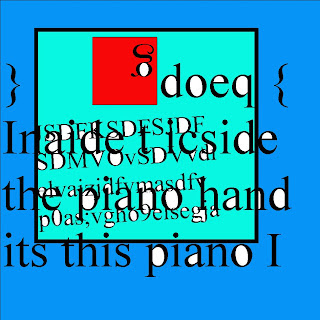 a broken-headed squirrel
stuffed
down my pants

a music stand
in one ear then out
the next

an email papercut
that becomes
one another

chimp kisses
with a snow-blower 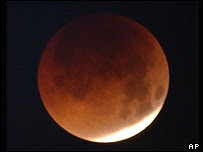 an eclipse of the moon by a violin
my words are only 10,000th as bright as a sparrow

The eclipse of the moon tonight:

I'll be the designated reader

There is a chess game where the pieces are letters. Each letter has a specifically defined pattern of movement. The game is between two players. Points are scored each time meaning is made – when the pieces align and can be read as sememes, as atoms of meaning, or indeed as words. There is a scoring system for these words. Two monkeys playing this game a hundred times could come up with all the ideas in Shakespeare. The game is a broken narrative, a lexicon, a poem. The players need special hats, pre-determined footwear, a place to play in the park. Maybe each player is a reader, and reads their own or the other player’s letters, or maybe there is a designated reader sitting to the side of the board, sipping coffee, recording everything. Later, game transcripts are bound and offered to readers who weren’t at the game. My son sat on top of the refrigerator when we were replacing it. We left the wine in the trunk of the car and it froze. 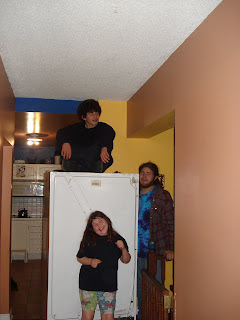 Posted by gary barwin at 1:34 PM No comments:

My favourite is transparent

Crag Hill invited me to name my 10 top movies. I’m assuming he means fictional films. I’ve been thinking about this.

I certainly have spent many times in front of flickering screens amazed, filled with wonder, sadness, joy, excitement. Also, I’ve felt comforted in the way that one feels eating comfort food. I’ve felt revulsion and astonishment – not necessarily at good films (One very late night, I watched most of Jackass 2 with my two teenage sons and we were revulsed and amazed for most of it.)

I’ve been entranced by actors or actresses. I remember, as an undergrad, being completely taken with the English countryside, country dancing, and Natasha Kinski’s lips in Tess of the D’Urbervilles.

My wife and I have spent many evenings watching movies. Great films or what seemed like a good idea at the time. We once watched Somewhere in Time, starring Christopher Reeve. It was a bittersweet intensely romantic film. Really a bit of melodramatic fluff, but we were twenty and we watched it at 4 in the morning and then went down to the Beaches to watch the sunrise over Lake Ontario. We watched it again a year or so ago. Though it is isn’t a good film, it somehow has a special place for us. Like many films, based on our memories of it and our associations with watching it.

As a nine year old in Ireland, I loved Chitty Chitty Bang Bang. I loved the dotty grandpa’s little telephone-booth sized shed where he had his dotty fantasies (It is a bit like the screenwriter, Roald Dahl’s shed at the end of the garden where he wrote his books.) I was in love with the Dick Van Dyck’s romantic lead, the character of Truly Scrumptious. I’ve watched many many movies with my kids, sharing their growing sense of the world while sharing my favourite movies, or discovering others. I remember many early mornings, half asleep and in the half light watching Raymond Briggs’ entrancing The Snowman. I loved the soft animation, the gentle sense of wonder, the beautiful music.

But I’m at a bit of a loss to name my ten favourite films. Most of their names are gone from my mind. I guess I could do some research. There was a Polish (?) film about an American soldier and a Polish woman who fall in love. He promises to meet her and take her back to the US. They are supposed to meet at the train station. He is late and she thinks that he was never coming. She lives a bleak, unrequited, life. The film is very grey except for her vision of the US, in vivid sunset reds, of dancing near the Grand Canyon. At the end of the film, she gets a letter. He has died and left everything to her. He always loved her. What is moving about this film is the amazing, fleeting, colour image of the beautiful US that appears just once in the film. It is her vision of what their life could have been.

But, though I could name many great movies, I’m not sure that I could commit to my favourite. (What is my “favourite colour?” When my little students ask, I always tell them, “Transparent.”) My grandfather and I used to play this game where we would try to name a soccer-team’s worth of the top composers. It was easy for the first few, but then who makes the last few spots?

In any case, here are some of my current favourite films.

I recently watched Everything is Illuminated and loved its quirky, off kilter beginning and then it’s mysterious, poetic, moving conclusion.

Many of the Coen brother’s films. Raising Arizona, O Brother Where Art Thou?, Barton Fink, The Hudsucker Proxy. I am a hudsucker for their cinematography, their sense of humour, their compassion, their oddball characters, their use of music, and how they weave their sensibility throughout all aspects of the film. I love those places where there is a quasi-philosophic, half-ironic, half serious speech or voice. The characters go into visionary, seer, mode. The final speech in Raising Arizona where the main character (Nicholas Cage) imagines his family gathered round him, his children and their children, imagines the passing of the years, the happiness that he hopes for. The old cowboy’s voiceover and the scene at the bowling alley in The Big Lebowski. The clockkeeper in the Hudsucker Proxy.

The Fellowship of the Rings, from Lord of the Rings. I’m not interested in the war scenes, but the other scenes, particularly those in the Shire. I guess I should be embarrassed to admit that I’m always interested and captivated by visions of the rural folk past. Tolkien was extraordinary in weaving folklore, myth, legend, and the flavour and aesthetic of a variety of cultures into his work. The film has a brilliant, resonant score. When I talk about LOTR, I always reminder a fantastically acerbic article by the Toronto writer Lynn Crosbie where she writes of her horror of being cornered by some sandal-wearing hippy, high on hash brownies who speaks to her of hobbits.

Monty Python and the Holy Grail. It got even better when I took a course on Arthurian literature while at York University. It is woven through with brilliant allusions. ‘She turned me into a newt…………………I got better.”

Paris, Texas. Wim Wenders heartbreaking, excoriating film with (hmm, this is a pattern) Natasha Kinski and Harry Dean Stanton. Ry Cooder’s bone rattling slide guitar score is a potent image of the heartbreak in the film.

I used to love Woody Allen. I recently saw Bullets over Broadway and enjoy its self-referentiality.

Whale Music based on the book of the same name by Paul Quarrington.

I'd agree with Crag about The Enigma of Kasper Hauser, Being John Malcovich, Harold and Maude (haven't seen that since I was a teen) and Waking Ned Devine. I haven't seen Local Hero in ages either.

But, I’m off to do some more research. I’ll get back to you. I’ll seem really smart.
Posted by gary barwin at 10:03 PM No comments: