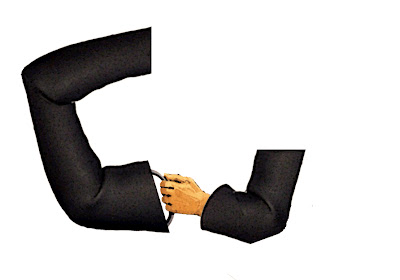 what's the difference between an attaché case &
habeas corpus?

(you shall
have
the body)

handily, this brief
is deattaché,

a case for the gripping pataphysician,
ubu ad nomen.

Sgt. Preston of the Yukon
may already be on the trail,
showsnoes.

but seriously folks,
Gary, this is yet another
of your images that i see
a million-dollar idea,
it'd be great gettin'
all dudd'd up suitwise
& walking down Wall St.
carrying an arm w/ a handle
onnit, perhaps, if one desired
to get political, one could carry the "armcase" dragging its hand on the sidewalk, the hand covered w/ blood, perhaps rig a device where a stream of blood runs down inside the sleeve & out into the hand, leaving a trail of blood, for money ain't innocent & "money don't talk, it swears" as Dylan sed -- perhaps one could carry a small bag of bones, on the pouch is inscribed "rattling the sound of your mortal coil", which would be handy when someone demanded explanation, one would say nothing, just shake the baggabones.

what's the difference
between
a language & a dialect?

the leaf
the tree

"Dr Pendegrass said: “By looking at the way the soft tissues attach to deer antlers and using them as natural analogues for ITAP, we have been able to artificially mimic the morphology of the bone that penetrates the skin. This has enabled us to successfully develop an implant to which amputees’ soft tissues can attach without infection.” Her work has been published in ‘Biomaterials’ and will feature in a forthcoming edition of the ‘Journal of Anatomy’.


Attaching a prosthetic limb directly to bone without infection will mean that prosthetics are much more comfortable, and will save on some of the costs associated with traditional prosthetics, such as replacement sockets, repeated fittings and treatments for infections and pressure sores."