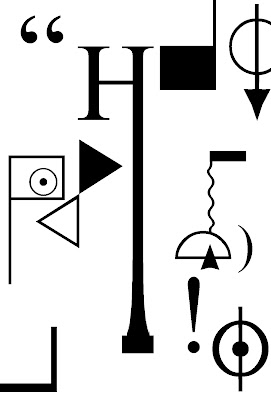 he appeared to me in a dream

unfortunately, it was someone else’s dream

A while ago, a hole was made in one of the walls of my house. I suppose I should have considered repairing it, but my first impulse was to hang a picture over top of the hole. One of my sons suggested that I take a photograph of the hole, frame it, and then hang it over the hole. A rather brilliant idea.

A few days ago, we were at a restaurant overlooking Burlington Bay. It was a beautiful view except that much of it was obscured by a very large TV screen broadcasting the hockey game. My son suggested that, when there wasn't a broadcast, they should broadcast a picture of the view behind the screen.

This evolved into our idea for a new specialty TV channel. It would be called MagritteTV. It would broadcast 24 hours / 7 days a week of what appeared behind the viewer's TV. (Even when the TV was off.) It would be a very local channel.
Posted by gary barwin at 6:50 AM

Your son is a genius!

That's also my objective analysis of him.