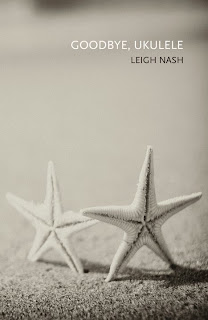 The Toronto-based Mansfield Press recently celebrated its tenth year of publishing. This literary press -- a labour of vision and love by Denis De Klerck -- continues to publish beautifully designed and produced books. The more recent addition of Stuart Ross as the poetry editor (and now the proud possessor of his own imprint "A Stuart Ross Book") has only served to further the press. Stuart has developed, acquired, and edited a number of fantastic debuts plus obtained (cajoled?) manuscripts for more senior writers (for example, David McFadden's Governor General nominated Be Calm, Honey.)

Here are two short poems which I particularly like from Leigh Nash's excellent debut, Goodbye, Ukelele.

Linear A: Syllables slotted into weather-beaten tetherballs, hull-less ships docking in the dark.


There's also a lovely play of vowels: for example listen to the o's of frozen deer drown, or the play of a’s and o’s in “Hands cradle a common...”

There is beautiful allusive imagery throughout the collection and these two poems are no exception: Tetherballs with syllables slid into them, hull-less ships, frozen deer drowning in metre, and hands cradling suffixes. What is a hull-less ship? A wave? A quantity of moving water that could contain a ship? A frozen deer -- how does it drown, except through prosody? And poor common suffix, needing to be held.

Nash notes that “Linear A is one of two linear and possibly syllabic scripts used in ancient Crete, and...Both scripts share some of the same symbols, but using syllables associated with Linear B in Linear A writing produces words unrelated to any known language.”

Which causes one to look for connections between these two poems. I won’t detail them all but there a rich source of connections, from the bipartite structure of the two sentences to sound relations between their elements: The d’s of docking and dark with the d’s of deer and drown.

These two little poems are like fragments from a lost text, theoretical translations from an allusive tradition, cryptic yet concrete. Two cuneiform tablets to be savoured on the tongue. Like a ukulele.

The other day, I woke and scrawled something down in my notebook. When I transcribed it and shaped it into a poem, I realized that it had taken its inspiration from Leigh's book and its lovely cover. The title of the poem is from the traditional song, sung by Stan Rogers, among others.

MAID ON THE SHORE

she lay down on the sand
the tide was her blanket
in the morning, what was there?

a starfish, a ukulele,
a red thread connecting
each thing to each other

And, while we're talking ukeleles, here's a great song and video by CPUnit, featuring an electric ukelele. The song proper starts after the introduction explains why the video came to be made - for an electric ukelele manufacturer's contest.