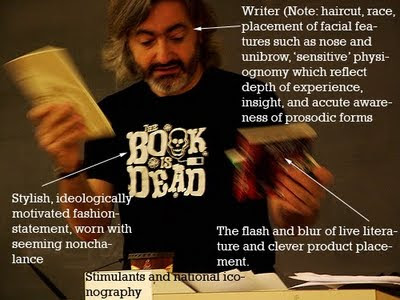 Poetry reader Gary Barwin in his natural state, surprised that an audience has gathered at this library to hear him read, in his natural speaking voice and s tyle, without any preparation on his part, 'hard-won' verses from his work, which happens to be brave, courageous, and deeply sensitive.

I’m always surprised that, while public performance is an important component of the culture of literature, the actual performances aren’t usually considered the way other performances are. Certainly readings are evaluated, the specifics of what was read are discussed, how the writer read (their voice, accent, commentary) is addressed, but usually, the readings as a consciously shaped art-form isn’t considered. I have wanted to do a study of the content of poetry readings, tracking writer’s selections of their readings over the years – particularly when the reading isn’t directly tied into the promotion of a particular book. But I’d also like to do a study of the performative aspect of poetry readings, an aspect of the poetry reading that is often not considered an actual performance.

The writer’s persona is certainly part of the performance. Sometimes writers seem to be ‘just being themselves,’ though usually--consciously, or unconsciously--this is something that has been sculpted throughout their life. I remember William Pitt Root giving a reading (1980?) when I was at the Interlochen Arts Academy in Grade 11 or 12. He shuffled, stooping, coughing, onto the stage in a red lumberjack jacket. Held a trembling cup of coffee (or maybe, it seemed, something stronger) and placed it on a stool. He had had a rough night. He had had an interesting and rough life, filled with sadness, hardness, interesting experiences, and great sensitivity. He had lived all of this and his ‘hard won words’ were the result. At least, this is what seemed to be projected by his performance persona. Tom Waits has played for decades with the intersection of his real life (whatever that is) and his stage persona. As the audience, we know that he has developed his persona, that it is part of the art.

Poetry reading are an art-form as much as a chamber recital. How does the writer address the audience? What is their body language? Do they shuffle through papers, and say ‘umm, I call this next poem…”? What is the flow like between poems? Do they speak in between? Is the reading a mini-anthology of their past works, or does it work to develop a particular tone, mood, or vision? Does the writer move around? What is their voice like? Do they intone, chant, read undramatically, does the particular tone and pacing bring out elements in the poem, do they abide by the published linebreaks, or change the rhythm and pacing? Do they read from a performance booklet? Do they throw their papers that they are finished with? Does their son, as my son once did when he was four, crouch in the corner and exclaim, “Daddy, I have to poo!” before rushing forward and throwing all of my papers into the air? How does the writer appear to be using the conventions of the poetry reading, how are they exploring these conventions? Are poems memorized? (I remember a vivid Gwendolyn McEwen reading where she dramatically intoned her memorized texts.) Do they improvise? Do they use something other than their natural speaking voice? Do they take the occasion to explain, give context (either within their own oeuvre, the particular project or publication, or within the broader literary context), provide anecdotes, or editorialize about their poems? What are they wearing and how does this relate to the details of their biography (age, gender, race, etc.)

There is something very different about a writer reading their work as a writer, and a professional actor performing it. Not only is the tone usually less ‘dramatic’, but usually we buy into the convention that the writer’s reading is ‘more pure,’ and unmediated by artifice even though we’ve had a hundred years of varying convention about how to read non-metrical verse, and we can think of many writers who explore their persona in performance whether seemingly consciously or not (from Yeats and Eliot, through Ginsberg and the Beats, to people, such as -- just off the top of my head-- John Giorno, Ron Padgett, Margaret Atwood, Michael Ondaatje, Christopher Dewdney, Geof Huth, Stuart Ross, not to mention all the spoken word writers.)

I, yet again, got to thinking about poetry readings as performance, and mention Geof Huth in this light, because, as my recent post about our reading at the Paper Kite Gallery and Studio in Pennsylvania, briefly reccounts, his reading deliberately played with some of the expectations and conventions of the audience. In 15 minutes, he read thirty-something pieces (though admittedly some of them were one word poems), he performed barefoot, he dropped his papers, and eventually scrunched them up and threw them, he roamed the stage, he improvised, he sat down in his audience seat in the middle of creating a poem song, signaling the end of the performance, and he provide us with a booklet with a colour cover with all the works that he had specifically assembled for this performance. Geof plays with the construction of individual words, of individual letters, of meaning itself. Why wouldn’t he play with the construction of the reading? Why wouldn’t more writers? Geof mentioned to me that my little note, was actually one of the rare discussions of specifics of any of his performances. It is shocking to me that we don’t have more reviews and analysis of poetry readings. They are, for many writers, an important part of their artistic practice, and not just a promotional necessity.
Email Post

J. Mae said…
I agree(!) when you compare a reading to a chamber music recital..I recently began to do poetry "performances" in collaboration with musicians and it's a completely different experience than collaborating with other writers. And yes, poetry readings should be reviewed just as other art forms/performances are.
12:43 AM