Pictograms from the Interior of B.C. 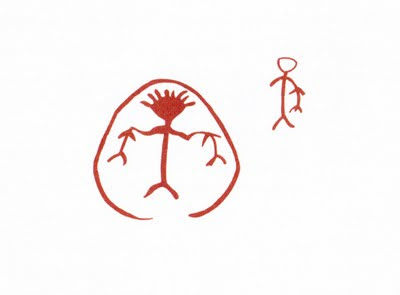 Hey! It Looks like
you got a couple ways in there

Show me how you do it
and I'll come too.

Over at her Lemon Hound blog, Sina Queyras has been posting poems and music from the 70s. A few weeks ago, I gave a poetry writing workshop at the amazing Blue Skies music festival in Clarendon, Ontario, itself a delightful 70s throwback. The workshop was at 9 am, Sunday morning in a large tipi in the woods. There were about 10 participants, including some of the most talented writers I've ever had the excitement of giving a workshop to. (One boy, in his early teens, was preternatural in his abilities to create witty, wise, resonant texts.)

One activity that we did was based on Fred Wah's 1975 book, Pictograms from the Interior of B.C. (Talonbooks, 1975). Each of the short poems in this book is based on ("transcreated" from) a Native pictogram taken from a study of pictograms from B.C. by researcher John Corner.

Wah attempts to 'transcreate' these images in words. As the epigraph from Coleridge says, "Not the qualities merely, but the root of the qualities is transcreated. How else could it be a birth, -- a creation?" (There's an interesting essay by Steve McCaffery in North of Intention exploring issues relating to Wah's project.)

Wah's book was one of my favourite books when I discovered it as an undergrad in the 80s, when I first became exposed to contemporary Canadian writing, mostly by spending all my time carousing around the library at either McGill or York university.

Wah's writing manages to be beautiful, goofy, evocative, spiritual, and explore mythological, Native, and ecological thinking, and play with ideas of transcreation, appropriation, and anachronism. There's also an innocent, earnest play* with the Native materials, a willingness to experiment with tone, form and what a poetry book can be. For me, this play in Canadian poetry of the time (60s to the 80s) was an exhilarating expansion of what I thought poetry could be, raised as I was on Seamus Heaney, Wordsworth, American modernism, and Shakespeare.

I also really liked the variety of book design. There seemed to be a greater variety of poetry book shapes and internal organization in the small presses. I love the terracotta colour of the images, many surrounded by lots of white space (the images are on the left, the poems on the right) and the minimalist feel of the texts. Their size, placement, and internal organization parallels the pictograms.


*I think a book transcreating Native imagery would be very different now, would approach the topic with less innocence, with a greater awareness of the difficult history between First Nations and the rest of Canada. Actually, that'd be a great project, a new 'translation' of Wah's book in light of the new understanding, the changed relationship with Native history. Or maybe, a Native writer will write a book 'transcreating' images from non-Native imagery. Perhaps, non-First Nations' writers should rewrite the book using non-First Nations pictograms. What are they? Urban graffiti?

Of course, what constitutes 'the rest of us' is very problematic, and often essentialized. Am I velvet paintings, McDonalds, and Rubens any more than I am roti, images of Ganesh, sushi, and paintings by Norval Morrisseau? (For the record, I think I'm probably Third Nations -- French and English, would be "Second": My grandparents were Lithuanian Ashkenazi Jews, my parents are South African; I grew up in Northern Ireland, moved to Canada in the 70s; my first modem ran at a rate of 300 baud; my children are growing up in Hamilton, Ontario; every day I speak, online, more often to people -- or their poetic avatars -- outside of Canada. But to be honest, though I understand the use of "Nations" in the term, "First Nations", I think the term 'nations' is problematic in other settings, and perhaps in the 'First Nations' usage. The concept of the "national", unless very carefully, and subtlely defined, is very treacherous.) 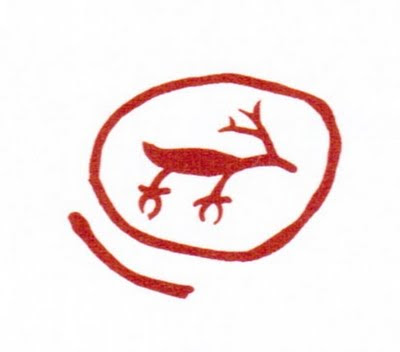 Anonymous said…
Great post, Gary. Non-First Nations ideograms could be road signs, or computer icons. Actually, now that I think of it, maybe I saw someone doing something like that with road signs, though my vague recollection is that maybe they were European road signs. It seems like if I tried to do it with Canadian road signs, the effort to erase my naturalized understanding of what they "really" mean, would make the whole thing a bit forced. I mean, with an ideogram which you don't immediately understand, it seems to me that it would be easier to access the "what the hell is that?" that it one of the ways into poetry.