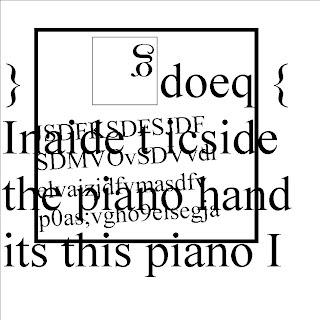 the shadows flicked undulations against the cave walls and they took the tv set and threw it in the fire. no pixilated mammoth a hairy flag across the screen, no advertisements to stop the caveman itch or new high performance footbags that make you dash against the pterodactyl air.

og used a wireless mouse to smash the small skull of an unfamiliar rodent. a flicker of irony in his boulderlike head. the dome of the rodent the small head of heaven inside a cave, the pink crenelated brain the earth in late afternoon.

they took the tv and plugged it into a mammoth, turned the channel, waiting as they still were for the guy to jumpstart the cable, and there was a mammoth on the screen. they pulled the plug and stuck it into the river. a wash of waves, floating leaves, logs, large simple beaver-like creatures, and the rush of water engulfing ig as he waved to those outside the screen.

a thunderstorm. summertime and then they plugged the tv into itself. a small brown tv appeared on the screen, frightened, meek, wanting home.

a ceremony. ug and the tv married and it broadcast itself and its marriage, the purple of the sky, the russet of the sinking sun, ug’s thick words of life together.

the tv as pillow. as something to be thrown to stop and stun a mammoth, a mountain, a snake fitting itself in the crack between one caveman and the next. before the thought of leaves or proper nose care.

children, remember your grandmother veneer, honour the dials and antennae of your grandfather screen, your boxshaped ancestor spirits. life coverage of wisps, of warnings, of the ghosts of the history that will be.

it speaks, a hiss like the embers of the fire at night. sleeping cavemen hear the slither and sibilance of its ray tube tongue. a bird that has hidden its wings, its feathers the slow static on a nighttime screen. it becomes its own flapping, the rush of its breath the trees of eyes and ears.

ig hears its secrets, begins to be moon suspicious, wary of the ferns. egg believes her babies find milk in raindrops, gather berries from under the thighs of the fields, wish for the quicker cereal and plastic of toys.

we feast on the mammoth light, the burning channel, the canyon of our stories.
Posted by gary barwin at 8:42 PM