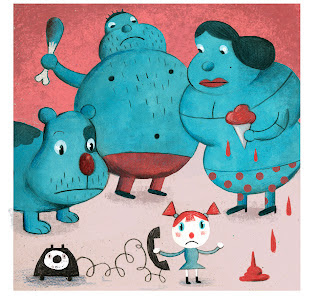 (Another beguiling image by Maxi Luchini from his blog.)

*
The other day I was at a Middle Eastern food store and bought some Dried Jews Mallow, mostly because of the name. It is a leafy vegetable, somewhere between tea and spinach. There were several recipes on the net and my friend Byron knew how to make a Greek version. Evidently the vegetable is very mucilaginous when cooked. Common recipes involve rabbit, lamb, or Chicken. It is very popular in Egypt.

*
I have signed up for Facebook though I don't know why yet. Everyone's doing it. I want to know what it is and what I could use it for. A teacher friend of mine discovered photos of his (clothed) butt there, taken by his students with a cellphone. The hyperintelligent shades of the colour blue which monitor our paperclip ridden life here on Planet Earth are laughing.

*
Soon I'm going to post some raps that my Grade 5 students wrote and recorded recently. (They record their raps over some bed tracks that I made and then I add in a variety of accompaniments and processing.) In my assignment for them, I gave them a form (four metric feet per line, rhyming AABB.) There are some brilliant and charming ones which explore the possibilities of the form. Some of the most enjoyable, though, are the raps where the kids wrote entirely random words only to fulfill the scheme. They didn't seem to mind that it made no logical sense.

Children, enter my empty head
I have dangerous zits and a porcupine
also a hammock of great ideas

they ask me
what will we see
through your one blind eye?

Anonymous said…
i spoke to abulatif in the morning
his pants were open for business
the pond croaked, froglessly.

they were detained at the border
with all serial numbers listed
but still not allowed into vermont
where the roaches infested the equipment
2:21 PM

gary barwin said…
this is what abulatif said
speaking from the empty pond of his pants:

he said visit http://www.johnfarah.com/ and find the serial number for God, the dark bar code of space.
11:57 AM