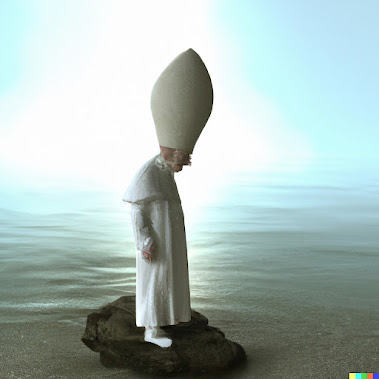 THE POPE’S VISIT
The Pope came to visit. We rented a giant U-Haul and drove to Barrie. We’d found a used fence for free on Kijiji. We went to pick it up. The Pope and I loaded it and we brought it back to my house in Hamilton. Later we will get fence posts but the Pope will be back in Rome so I’ll have to do it all myself. 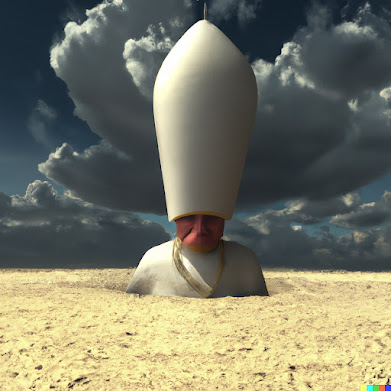 Today was a beach day. We packed cars, brought sandwiches, watermelon and towels. We all arrived at the same time and it sure was busy. The smell of sunscreen reminded everyone of childhood. It was a beautiful day. Someone had brought the Pope. We were bored and so we buried him in sand. Everyone forgot where he was! Finally, the sun went down and we all went home and went to sleep. The Pope was happier in the sand, soft, damp, and cool. One day, he hoped, he’d be discovered. 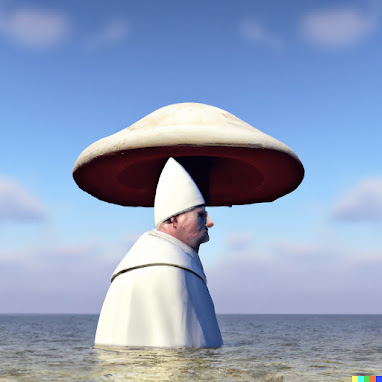 LEGS DAY WITH THE POPE
It was legs day and so I did Bulgarian Split Squats, Romanian Deadlifts, Hip Thrusts, Goblet Squats, Glute Hamstring Curls and Barbell Squats. When I went to lift the barbell, I saw the last guy hadn’t wiped it down. Sorry, the Pope said. Under his cassock, his legs were Roman columns. Doric, Ionic, or Corinthian. The Pope looked up at the ceiling. I think he saw something. 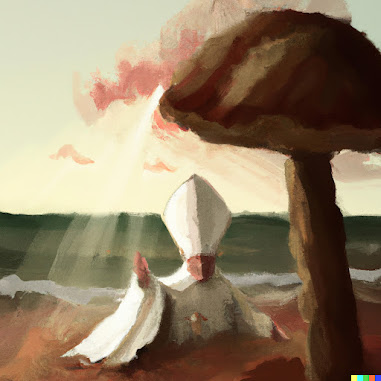 THE GAME
I finished my coffee (white, two sugars) then went into the Pope’s room. It’d been a long night. We'd played the Pièta game. First he was Mary and I was the dying Jesus. Then I was Jesus and he was Mary, weeping over her son. Wakey-wakey, I said. It’s really morning? Yes, I said. It can’t be morning. It is. And some of us could do with brushing our teeth and washing our infallibles. Finally, the Pope opened his eyes. I know everything and I forgive you, I said.
_______________

A NOTE ON ADDRESSING ISSUES OUTSIDE OF MY WHEELHOUSE


I wrote these four little pieces because the Pope came to visit Canada to address the church's role in the genocide of Indigenous people. The church was involved in the formulation and implementation of racist and genocidal attitudes and practices, from the Doctrine of Discovery to Residential Schools. Canada had a "Truth and Reconciliation Commisssion" which wrote extensive and significant reports and created recommendations.  The Pope came to Canada after a representation of Indigenous people went to the Vatican to speak to him. The details of what the Pope said and didn't say are available in the news.
Here, I want to note that I'm not Indigenous and perhaps some would say it isn't appropriate for me to write about the subject in these poems; me, not having lived the experiences of the Indigenous, not being able to know the pain and suffering of these communities. And not being part of the complicated intertwining of  Christianity and Indigenous people. There are many Christian—Catholic—Indigenous people with their own relation to the church and its beliefs and behaviours.
And additionally, who am I to slag il papa—me, a Jewish guy. I should say that in writing these pieces about the Pope, I'm not ipso facto critiquing Catholics. Identity and religious are complex and one can have a religion or identity but yet still have significant, even fundamental issues with doctrine or practice. I'm also not dismissing Catholicism out of hand, regardless of my personal views of institutionized belief. There has been much beauty, compassion, insight, and kindness from the church or its members over the millennia. But there, obviously, has also been much wrong. Misogyny, racism, homophobia, violence—physical, sexual, psychological, economic—and the entire suite of colonial exploitation and complicity or leadership in these things. Women were still not allowed to address the Pope in his visit. The church won't pay the money they were ordered to by way of restitution. They won't release records from residenial schools. They haven't revoked the Doctrine of DiscoveryI do hope this might change.
So, why am I writing about these things? Why do I not remain quiet and allow those more directly and intimately involved the space? These are small poems. Many far more extensive, articulate, powerful, insightful and informed discussions by Indigenous people—writers, scholars, survivors—are widely available and here on my blog or on my social media feed, I don't feel I'm taking up their space. I don't have a big platform. I'm so glad and grateful that we are at a time in Canada where the voices of Indigenous people—those writers, scholars, survivors, artists, journalists, etc—are very accessible, are consulted, considered and available. Sure, they may be as ignored or steamrolled over as much as any view or experience which challenge the deeply colonial capitalist neo-liberal status quo in most Western countries and are sometimes part of the prog-washing that happens—i.e. seeming like we're listening but really just doing it performatively. But they are there and we can listen.
Without sounding too self important or precious, as a writer, I do feel a moral compulsion to address what I consider important issues. Of course, I do try to be careful and sensitive not to appropriate or stomp all over discussions that are better left to others. I certainly wouldn't try to speak for others directly, for example, by writing from the perspective of an Indigenous person. I think there are other ways to address the issues from my subject position. Nor would I ask Indigenous people to take on the work for me — of dealing with my worry about this, my guilt, etc.

I hope, though, that I can be one voice among many and that readers can consider the messenger—his experience and limitations—and judge accordingly. The role of a writer is to think and engage with things they consider significant.
I feel that I'm able to address some aspect of this issue particularly because one that doesn't have a vast platform. If the CBC called me up and asked me to comment on the Pope's visit, I'd defer to an Indigenous person or particular expert in the area. But there can be a space for a kind of tertiary discussion from those not directly involved but watching, thinking, considering.
These little pieces take a parodistic and quite absurdist approach to the subject—a technique I have used in much of my poetry and fiction—as a tool both not to be too pretencious, but also, through the distance of irony and absurdism and humour to offer another way in to consider the subject. This isn't by any means to underplay the significance of people's experience and pain, or the seriousness of the Catholic church's role in creating these tragedies.
It is important to me how we are in Canada. It is important to reckon with the role and experience of Indigenous people here. It is important to me how we address our history and behaviours going forward. Compassion, empathy, and advocacy are important to me.

Like always, I hope that I've not miscalculated, not just in these little pieces but in others. For example, in my novel, Nothing the Same, Everything Haunted: The Ballad of Motl the Cowboy, which makes connections between the Holocaust and Indigenous genocide and the concept of intergenerational trauma generally.

I hope that as a writer, I'm joining other writers in consideraing and expressing what is important. Being an ally where being an ally is appropriate. Being a comrade where that is appropriate also.
_______
The images are from an AI engine -- DALL-E, based on textual prompts which I entered.
Email Post