Canadian Jewish Literary Award and new paperback cover for NOTHING THE SAME, EVERYTHING HAUNTED 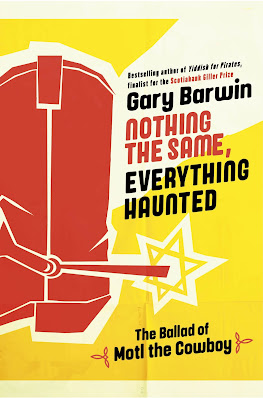 I was very delighted today to receive the Canadian Jewish Literary Award (Fiction) for the second time. I was for my second novel,  Nothing the Same, Everything Haunted: the Ballad of Motl the Cowboy. The  ceremony was very moving and inspiring. The other winners were so thoughtful, interesting, inspiring and articulate. Here's their website with all the winner.

I gave a short speech which I thought I'd post here, below. I'm also sharing the draft of the cover of the paperback version of the book (above) which will be out soon. It's beautiful, another brilliint cover by the designer Andrew Stevens. I'm calling this cover a reboot. And that yellow is custard's last stand.

It very moving to receive a Jewish award for a novel about the Holocaust, particularly one that draws deeply on the story and experiences of my family and their history in Lithuania.

Literature can offer connection, empathy, understanding and consolation between those of vastly different experiences. It explains ourselves to ourselves but also to others.

And my book makes connections between the Shoah and Indigenous genocide. Once, the remarkable Metis writer, Cherie Dimaline said to me that “we’re genocide buddies.” Jews and Indigenous peoples. That’s brutally true. And important.

Since I first encountered them as a teenager, I often think of these lines from Marvin Bell’s poem “Gemwood.” “Now it seems to me the heart /must enlarge to hold the losses /we have ahead of us.”

So there’s an old joke about when Abe finally meets God and tells him a Holocaust joke. God doesn’t get it. Well, says, Abe, guess you had to be there.

Without parsing the theological implication of that joke, I can say that it the role of writers particularly to “be there” – to act as witnesses, as witnesses to the witnesses, and to allow others to “be there,” both now and in the future. And also to be vigilant about that present and that future. So that no one can say they didn’t know, or didn’t notice. About any genocide or persecution.

My novel weaves broad research with stories I learned directly from my family, including my grandparents, my parents, my in-laws, our family friend, Erwin Koranyi, and my great-uncle Isaak Grazutis, a painter, who as a child, literally walked himself to safety. I am, course, deeply grateful to all of them and to the survivors and researchers for sharing their stories and knowledge.

I’d like to thank my agent, Shaun Bradley and my editor, Anne Collins and my parents, in-laws, siblings,  children and my wife, Beth for their continued support, enthusiasm and curiosity.

And thank you to the jury and to supporters of the Canadian Jewish Literary Awards. As I said this really mean a lot to me.

I’d like to end with a story about the great Yiddish poet and resistance fighter, Avram Sutzkever which I paraphrase in my novel. He had found himself having to cross a minefield and, having no idea where the mines were, didn’t know where to step. He decided, because it was as good an idea as any, to put his faith in literature and walk across the minefield in the rhythm of a poem. Miracle of miracles, he made it safely across the field. In an interview he gave years later he said, “Ach, I wish I could remember what the poem was, because it turned out to be a very useful poem.” So there’s that. Putting one’s faith in the power of literature to give hope, to guide, to surprise and outwit, and to take you through dangerous places. provide a good story, a good punchline, and sometimes, a happy ending.

Nauman Khan said…
Thanks for sharing such an informative post. Please keep it up the great work and surely come back for more information. Please visit us here as well to learn about service and maintenance.
3:17 AM