I’d like to propose an alternate model for the Toronto Small Press Fair, not that I haven’t felt that past Fairs haven’t been been fun, vital, important, formative, and successful.

I could imagine a series where reading is connected to publishing. Each performance would feature a few/several small presses, each of whom would be responsible for presenting some performance/event which would be related to their publishing. This could include such things as readings, live publishing, talks, multi-media, extreme performance anthology creation, etc. 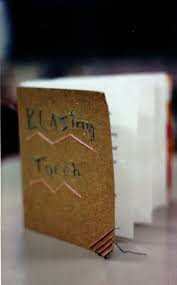 I remember the old “Meet the Presses,” that Stuart Ross and Nick Powers ran in the Scadding Court Community Centre (and not just for the people being baptised, fully dressed in the public pool.) I remember the excitement of seeing what new work had been published by presses and really having a chance to interact. However, what I really liked was the interplay between publishing and performance. I still remember Nick Powers’ blueberry pie which went alone with a lovely little blue Gestetnered chapbook published by his Gesture Press.

What I’m imaging takes off from there. The event I’m imaging would break down the proscenium where the publishers stand behind their tables and the public file by. This would be more thrust-stage, or no-stage, audience interactive. Such a forum would perhaps engage the performative imaginations of the publishers/writers. It would offer an opportunity for publishers/publications to engage with the audience and – perhaps most importantly – vice versa.

There would still be tables and publishers (though fewer each time), however they would be woven into the more performative focus. Each of that month’s publishers would get a turn. But instead of thinking of the performances as ancillary or distracting, they would be an integral part of the event. As would impromptu discussions. Also, with these events happening more often, there might be a greater small-press specific continuity. Also, there’d be food and drink. It’d be more of a night-out event.

What do you think?
Posted by gary barwin at 8:11 PM