My late grandfather was a keen hobbyist photographer. He travelled widely around the world for his business and documented the places he visited. In the 50s and 60s, he travelled to Asia and Europe as well as around Africa. He lived in South Africa and spent many weekends photographing in the game reserves. He had a Nikon camera and a huge zoom lens which he would prop on the opened window of his car and take extraordinary pictures of the giraffes, lions, wildebeest, and other indigenous animals. He also travelled to villages and took pictures. I think the amazing "Dread God" photograph (above) was taken in Speakers'Corner in London. 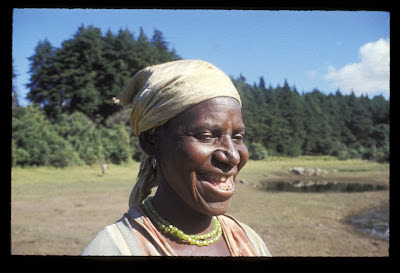 I believe this striking picture of an African woman was taken somewhere in South Africa. She seems utterly present in the centre of her life. 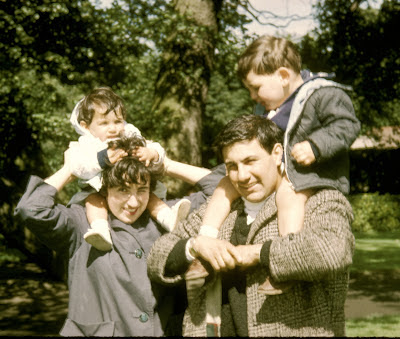 The last photograph is a portrait of my parents, my brother, and me taken when we lived in Northern Ireland. My parents were in their mid to late twenties in this picture. They also seem in the centre of their life, in the centre of this sunny spring day. They look so young and fresh faced, ready for anything in their future. Looking at pictures of myself and my own kids, I get a baffling array of contradictory and complex feelings. Of course, looking at yourself is obviously more complex. You are living inside the photo, not just looking in. You know all the complexity of feeling that surrounds the instant of the snap. (I'm reminded of a physical example of this: my author photo of my first book Cruelty to Fabulous Animals. My wife took a picture of me standing on Paradise St. Just below the visible photograph, my two sons were running about like tiny maniacs while I tried to look authorly appearing as if my mind were focussed on literary pursuits, rather than hoping my boys wouldn't kill each other or run in to traffic.)
Posted by gary barwin at 2:58 PM

That's a lovely photo gary. It could have been taken yesterday. I have a copy of a similar photo of my parents near the river Shannon in Ireland at about the same age. My sister is in it as an infant, I'm off camera as a whelp, I'm guessing. Part of what strikes me is the quality of the photography available back then. Digital is great, but the Brownie Hawkeye took some killer photos for people who had no interest or skills with a camera.

Thanks,Kevin. I wonder what kind of photos I'm leaving for my kids/grandkids & descendants -- what pictures of me and of their childhood.

There was that shocking and clarifying moment when I remember, as a parent, watching my kids watching me and then remembering when I watched my parents, not able to imagine them looking out from the inside of themselves. What kind of strange cardboard cutout am I in their eyes? I think it takes - a huge leap of maturity and non-selfcentredness to imagine, even for a moment, how another person, especially one's parents -- experience life, themselves, the world. You have to let go a bit of the self, of the sense that your own perceptions actually make the world. If you let go, the world won't fall apart, just change. But, at least for me, that's difficult. What if I don't find it again? What if it's different?

I think it was easier to be that little boy hoisted on his dad's tweedy shoulders, somewhere in Ireland.