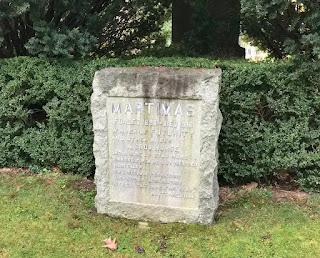 What reconciles me to my own death more than anything else is the image of a place: a place where your bones and mine are buried, thrown, uncovered, together...With you I can imagine a place where to be phosphate of calcium is enough.

All very lovely, but it does lead me to wonder if the plan is to die together. Or, after one or other of us dies, the grave is opened and, according to a precise IKEA-like assembly plan, our bones are fitted together into this final and eternal embrace and then the lid of earth put back on like a patch of hair after neurosurgery.
*
Do I think about the living archive of my now adult children, how they embody my bodiless legacy in the sense that more than just being a sack half-filled with my DNA, something of the way they live and who they are is because of me? Though of course it is somewhat true, I don’t consider this, except perhaps when they’re feeling badly and I wish I had better prepared them for adversity. Or gave them supercharged “very satisfied with life” genes. Otherwise, their qualities are their own, even if I can identify some aspects that perhaps connect to me. I might have given them the violin but they learned to play it—violin here as both an expression of values as well as a physical inheritance. Nature. Nurture. Stradivari.
* 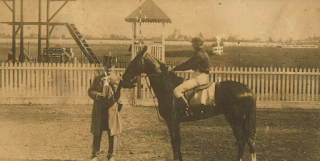 In breeding horses, breeders consider personality as well as the physical. Certainly Martimas’s progeny Kelvin, Shimonese and Slipper Day were race-winning animals, a fact attributable to both mind and body. In 1911, the Daily Racing Form wrote that Slipper Day, owned by Hendrie’s son, John, who became the 11th Lieutenant-Governor of Ontario was “the fastest filly ever bred in Canada.”
*
Incidently Martinmas’s sire was Candlemas, his dam Biggonet, the “mas” suffix in Martinmas inherited from his sire. I’ve often wondered about the tradition of naming your children after you. Or with names that refer to you. John and John Jr. Or Johann Sebastian, Johann Friedrich, Johann Christoph. In Iceland, surnames are build from the father’s name. Björk is Björk Guðmundsdóttir which is Björk, the daughter of Guðmundur. In traditional Jewish naming, it works the same way. In synagogue, I’m Gershon Ben Nachmann (and now v’Miriam.) Gary son of Norman (and Myrna.) I think it’d have been years (more) of therapy if I’d named my kids after me though. In Ashkenazi Jewish tradition, it is traditionally very bad luck to name a baby after a living person, but the proper thing to do to name them after a dead relative. Hence my son was named after his great-grandfather. I do like the idea of continuity. Not that there are qualities that my son shares with his great-grandfather, just that he’s connected with his ancestors, if only by this custom.
*
There’s a Jewish tradition that rather than leaving flowers at a grave, you place a stone on the gravestone. That’s some imitative magic there. Stone on stone. And there is something elemental and solemn about using a stone. Nothing says gravitas like stone. And the stone stands in for earth or ground. Where the loved one is. And time is long and enduring as stone. And long as the remembrance of the dead. And more enduring than flowers, those fussy, bright living but not for too long things.
Another idea is that the stone keeps the soul in the world. Hey, you want to go to paradise? Sorry Charlie, I’m plunking a rock on top of your grave to hold you down. Another idea is that it stops golems and demons from getting in. Think I’ll go bring evil to this dead soul. Oh no. There a small rock in the way. Guess I’ll go to Washington instead.
Of course—because Judiaism—there’s also a language reason. Apparently the Hebrew word for “pebble”—tz’ror—is the same as the word for “bond.” According to The Star of David Memorial Chapel’s website, “When we pray...we ask that the deceased be ‘bound up in the bond of life’ – tz’ror haHayyim. By placing the stone, we show that we have been there, and that the individual’s memory continues to live on in and through us.”[2] My word for pebble is my bond.
*
I have placed stones on gravestones. I’ve also lifted stones, cupped them in my hands, felt their heft, that they are made of the earth as well as archetype. Something bigger. Whenever I lift a stone I think of history, of those who have died, perhaps buried beneath headstones, of those who have been lost. Sorrow turned to stone? A petrified ritual? Charles Simic evokes the mystery of a stone in his famous and mysteriously named poem, “Stone”: I have seen sparks fly out/When two stones are rubbed/…Just enough light to make out/The strange writings, the star-charts/On the inner walls.”
When I lift a stone, I think of those who have no headstone, those who are buried beneath stones only in unmarked earth. The parents of that great-grandfather after whom we named our son, my great grandparents, were shot in a small town outside of the city of Panevėžys, Lithuania during the Holocaust. Through archival research, I found details of their death in a registry. The name of the town. The approximate date. My grandfather was told about their murder years later by a drunk guest at a Bar Mitzvah in South Africa, came home and told my teenage father. Simic: “Let somebody else become a dove/Or gnash with a tiger's tooth./I am happy to be a stone.”
*
In the end, it’s not entirely up to me how I am remembered. I’d be gratified if people kept reading—or began to read—my writing and listened to my music. I’d be touched if some thought of me that "He strove that such innocent creatures should come to no harm." or even, "He was one who had an eye for such mysteries." (Hardy, “Afterwards”) But it’s more about this life, while I am alive, trying my best to be a good horse, and not to remembered as a sire of good horses, though my children are that, but a good sire. Friend. Husband. Person. I don’t expect any of us to win a horse race.
[1] https://www.rbg.ca/the-mystery-of-martimas-the-horse-of-hendrie-park/
[2] https://www.jewish-funeral-home.com/why-do-jews-place-stones-or-pebbles-on-a-grave/#:~:text=Jews%20believed%20that%20placing%20the,from%20getting%20into%20the%20graves.&text=Flowers%2C%20though%20beautiful%2C%20will%20eventually%20die.
Email Post

Lazer Ben Tzvi said…
I never asked you to say Kaddish after me, but if not you. who? I hope its not for a while.Your Father in Law!!
8:04 PM

gary barwin said…
You didn't, but you did say that you'd want someone to and I figured it might be me! I'm hoping, though, it'll be one of your future great-grandchildren, 20 years from now.

Jessamyn said…
Gorgeous writing. Thank you for this.
6:12 PM