Gary Barwin on Form, Social Media, and the "Epistemological Hijinks of Poems"

I'm really happy to share this interview that I did with OpenBook.ca. The nicely laid out interview is here. I'm grateful for the excellent questions. 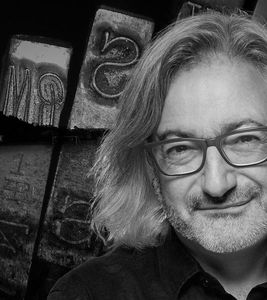 Known for his humour, creativity, and general up-ending of the peskily staid CanLit stereotype, poet and fiction writer Gary Barwin shows no signs of slowing down with 26 books to his name.

His newest, the inventive and kinetic The Most Charming Creatures (ECW Press) collects poems that are equal parts playful and sharp. Examining language and culture and how these systems can create and deconstruct us, Barwin is equally at home when his words find themselves tender and quietly awed as when the poems  bloom wildly into the witty and unexpected. The collection manages to careen from subjects like stand-up comedy and onion rings to grief and Martin Luther, while still seeming expertly controlled.

We're excited to welcome Gary today to chat with us about The Most Charming Creatures and his writing process. He tells us about the "ghost" in the book, the surprising answer to just who the titular creatures actually are, and why he tries to write with empathy and heart but also an "awareness of the sneaky epistemological hijinks of poems".

Can you tell us a bit about how you chose your title? If it’s a title of one of the poems, how does that piece fit into the collection? If it’s not a poem title, how does it encapsulate the collection as a whole? 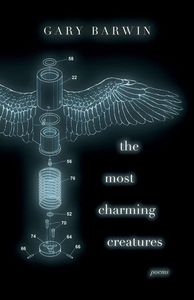 There is a ghost in this book, the title, The Most Charming Creatures, because it came from the title of a poem which, in the end, I took out of the book. It was something that I wrote for an eponymous video work by Catherine Heard. The video was published in the Heavy Feather Review, Catherine’s work is so beautiful – both so human and so non-human, both vast and tiny.

Apart from your editor and other publishing staff, who were the most instrumental people in the life cycle of this book? Did you share your writing with anyone while working on these poems?

I want to give a shout-out to my friend, Donato Mancini, a brilliant poet and equally brilliant editor. I hired him to edit a draft of the book. He’s great: he really pushed the poems and frankly, suggested which things weren’t working (including entire poems.) He often suggested new lines or words, which really opened up possibilities for me for discover my own new material. He helped me with two other books. The Bird Arsonist (New Star, 2022) which I wrote with Tom Prime and, coming next year, duck eats yeast, quacks, explodes; man loses eye (Guernica) which I wrote with Lillian Nećakov.

I should also say that while writing the poems in the book, I was really feeling a sense of how my friends, family, colleagues both in person and online were feeling. Loss, grief, worry, anxiety. I mean, look at the world! But they also seemed to be feeling it individually. I was, too. I don’t trust poems which seek to console or have empathy, but I love them anyway. Some of the poems in the book were written with these thoughts in mind. Empathy and compassion, but also an awareness of the sneaky epistemological hijinks of poems.

What's more important in your opinion: the way a poem opens or the way it ends?

Interesting. Are poems actually linear? Often, I feel that one encounters them (at least the shorter ones) in a single bite. You know, like an entire pie. But certainly, most poems have a physical beginning and ending. I think it always depends on the poem. Let me give some sage writing advice: Be aware of the beginning of a poem; be aware of the end of a poem. Also, the parts in between. But really each part of a poem is a possibility, an opportunity to do something and to play against the other parts. It’s exactly this which I love about poems. What are the various parts of a poem doing? How do they go along with your expectations or surprise and confound you? How do the parts work together or separately? What of all the possible moves a poem can make, does this poem make, and which ones does it not make? That’s why these often small twittering machines that are poems are so endlessly fascinating and engaging and why they continue to inspire people‚—including me— to write and read them, I think.

Do you find social media fits into your writing process at all? If so, how?

I’ve been really thinking about this lately. For fifteen years. Certainly, social media can be distracting and disheartening but it’s also a source of such access to creativity, good conversations, poems, publications, articles, art, and ideas. I learn so much in this way. But also, I post a lot of work in various states of development. It makes me feel that my writing and I are connected to the broader community. I know I kind of barrage social media with my work, but in a way, I see it as a window onto my desk, a kind of live web feed. I don’t expect followers to engage with everything. It’s like an ongoing status report, though of course, I love when people engage. In a way, it’s also sometimes like an actor practising on a stage and feeling the performativity of the time and space that theatre operates in, rather than just the less dramatic living room. I get to try out work. To see what it does in the charged place of sharing, performativity, community, audience.

Of course, social media can interfere or distort. Certain work, while effective and worthwhile, just doesn’t work on social media. And we’re all at the mercy of algorithms and, uh, capitalism which controls engagement and attention. I might create the very best video hosted on YouTube, but Facebook suppresses the visibility of much YouTube content (b/c owned by Google) for its own corporate reasons.

Another thing is that this access to a constant stream of social media can mess with one’s attention and one’s confidence. Wait! Why am I not involved in that? How come they didn’t say that about my work? Social media is perfectly tailored to access the argumentative, insecure, petulant 14-year-old self of each of us, I think. But the good side of that is enthusiasm, excitement, and the possibility of social interaction. I often end up writing with people I’ve met on social media, or even write on social media with them. Or I find content that inspires me and work with that. Also, sometimes the chance input of social media can unlock something or suggest a new direction for a poem. Like when I began with a sonnet and ended up buying a tractor.

What advice would you give to an emerging or aspiring poet?

Get involved in poetry community. Go to readings. Make sure that you aren’t insular but are part of wide-ranging poetry things outside your usual range. Try everything, even if you don’t understand it. Read things that puzzle you. Write things that confound you. Don’t write what you think you’re supposed to, but what genuinely excites you. Cover yourself in cod liver oil. Or cover your favourite poets in cod liver oil. No, that’s not right. I meant: Publish but only to be part of a conversation. Maybe publish your own work and those of writers you admire (just ask them!), get involved in a magazine or in reviewing; be honest, but be kind. And also, you can write many different kinds of things. You don’t necessarily have “a voice” or “personal style.” I think, your “voice” is really just your curiosity and your process. Also, make it up yourself. Don’t listen to writers like me.

For you, is form freedom or constraint in poetry?

Robert Frost once famously said that writing “free verse” is like playing tennis without a net. Oh but what if you played without a racket, or a ball, gravity, another person or even your self? (Or even without Robert Frost.) Come on, up your game, Bobby!

But it’s like trying to write a poem about “nothing” – it’s impossible. There’s always “form” in the sense of the language—its words, sounds, grammar and so on. A writer is never not writing without some kind of form. Language as I said, is the elemental form, but so is time. Could I take 97 years to write a poem? It sometimes may feel that way.

But I think the question really is asking if form is generative. I feel that poems are always playing with expectations. That’s very generative. How does the poem engage with formal expectations: is it even written down? is it on a page? Do things repeat? Are there words or sentences?

I do find all these issues very generative. In a poem, I have the opportunity to remake everything, to be informed by everything possible. The reader also has that opportunity. It’s all a kind of formal play. So, for me, freedom is the chance to always engage with various levels of form (constraint.) It’s playing tennis without anything but the net and choosing what else is there.

What are you working on next?

I think it’s garbage day and I’ve got lots of recycling to bring to the curb. Soon as... yes... I’ll do it now... in a minute... I’ll just finish this thing on my computer... just one more sentence... just to the end of the page... one more image... but really I’m deep into a new novel called Death Writes a Novel. I’m finding it one of the more challenging projects I’ve ever tried. For lots of reasons. Some because it addresses personal things, some because of everything else. Plot, character, setting, tone. I’ve had to substantially change the entire manuscript several times. Basically, Death’s son has died by suicide and he recruits a washed-up comedian to be a kind of Orpheus and ask for his son to be returned to life. Death promises that he’ll make the comedian funny again if she will just agree to do one more stand-up routine, this time before the Fates. I recently spent a week at my friend and collaborator Elee Kraljii Gardiner’s place in the mountains in BC (thanks, Elee) with my daughter (thanks, Rudi) and during many hikes, stargazing sessions, and meals, she helped me unlock something important about the novel that I was missing. All of a sudden, my protagonist (the comedian) came to life for me in a way that had previously eluded me. So it’s full steam ahead. I’m into Part II and ¾ of the way done.

The bestselling author of 26 books of fiction and poetry, Gary Barwin has won the Stephen Leacock Memorial Medal for Humour, the Canadian Jewish Literary Award, and has been a finalist for the Governor General’s Award and the Scotiabank Giller Prize. He lives in Hamilton, ON.