All Shall Be Well with Spongebog Squarepant and Julian of Norwich. 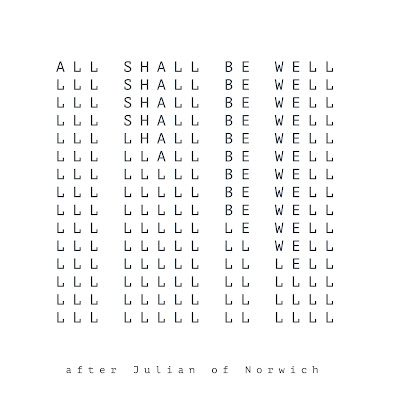 The Yiddish scholar Eddie Portnoy posted a Yiddish translation of the Spongebob Squarepants theme song. There's something so delightfully intriguing in this seeming mismatch.  Spongebob Squarepants translates as "ShvomBob Kvadrat-Hoyzn." Amazing. Immediately, this felt somehow poetic to me. Robert Bly speaks of "Leaping Poetry." When a poem "leaps" it makes “a long floating leap from the conscious to the unconscious and back again, a leap from the known part of the mind to the unknown part and back to the known.” From Yiddish and the historical world of my ancestors to Spongebob. From one part of culture to the other. Not bathos -- where the poem or image just sinks into ridiculousness, or at least, a ridiculousness which doesn't also engage with some kind of metaphysical or cultural absurdity, fusing high and low, connecting various parts of our imagination, consciousness and psyche. I feel this phenomenon when two epistemologies are connected or made adjacent. So Spongebob's umwelt experience of Bikini Bottom with the world of Yiddish, historical Jewish culture, mysticism, learning, etc. (Of course, there are plenty of examples of Yiddish popular culture which isn't metaphysical, just as bawdy, silly, commodified, pandering and so on, but for me, my first association is with the old world and my imaginative sense of scholars, mystics, wise everyday people filled with sayings, deep humour and approaching the complexity, difficult, persecution, travails and profound joys of their life. Some of this I got from spending time with my Yiddish-speaking grandfather and his evocation of the tradition which he imagined and aspired to. 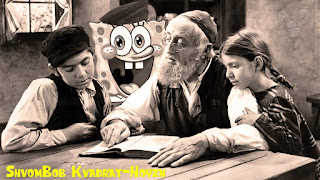 So, I set about making some visual collages, adding Spongebob (ShvomBob) into what seems like perfect Ashkenazi tropes. I was also thinking of Gerard Manley Hopkins' poetry. Why? Well, I'd listened to a couple podcasts about him (for example, the London Review of Books series about canonical poets.) I've also played with riffing off his poems, adding in internetspeak, colloquial language, and other contrasting tones. There's a leaping electricity with playing with the contrast between his densely tactile hypercharged inscape-fueled language and other language which has its own world of associations. And so, I made the poem that appears below. It has a kind of Flarfy energy and, strangely, a bit of Celan-like sound to it. I also was intrigued to put the poem beside the image. It's not quite an ekphastic poem -- the poem doesn't quite describe the image -- but it does have a relation to it. That's another kind of leaping. 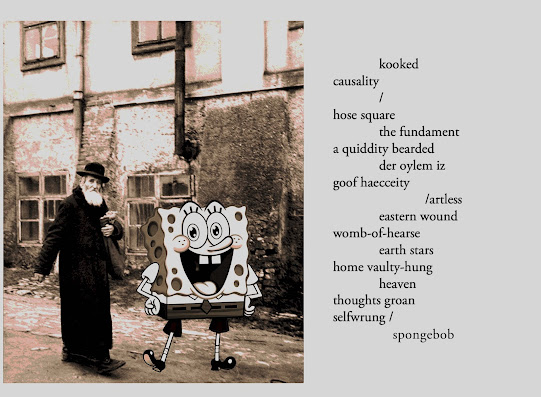 I've added the poem based on part of a famous quote from the medieval anchorite Julian of Norwich. It has its own kind of contrasting electricity. And I love the presence of so many L's in her original quote and the uplifting, contradictory, absurd, funny yet still beautiful transformation of the quote to a line of all L's.