Ethical Squonking: On the Coltrane-Rollins Continuum 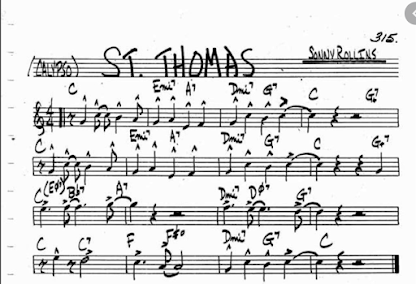 Right now I’m listening to Sonny Rollins play, “I’m An Old Cowhand,” off his 1957 album, Way Out West. I put it on because earlier today I tweeted, “I feel like I'm Sonny Rollins when I want to speak to the world like Coltrane. Really, what an astounding thing if one could be Rollins.”

Of course, you remember that old story about how Rollins heard Coltrane and so stopped performing, instead going out to the Williamsburg Bridge to practice, questioning his vocation as a musician. “Sure,” Rollins is said to have thought, “he was good, but Coltrane was important.” What to do in the face of such possibility, such importance? Was it enough to just be a marvellous and virtuoso player or should one strive for the wisdom, depth and transcendent spiritual and political significance of Coltrane. Or at least that’s how I remember the anecdote.

And in the face of the world, as I was learning saxophone, deciding what I wanted to do as a musician, composer and writer, I felt that I naturally should aspire to be on the Coltrane side of the Rollins-Coltrane divide. Gravitas. Wisdom. The spiritual, at least in the sense of digging deeply into the spirit of the world, of searching for insight beyond entertainment. As if it were the difference between being Bozo the Clown and Martin Buber. Chuck E. Cheese and Spinoza. (Though those pair-ups might make good MMA matches. I mean with enough grease.)

I should say that Rollins personally has been involved in spiritual pursuits and learning, particularly from Eastern traditions since the 60s and speaks of living a deeply spiritually informed life. I’m here talking about the Rollins-music avatar of my imagination and perception as I was earning my Vandoren's and Rico Royal 2 1/2s.

I once heard Sonny Rollins play in Toronto. It was a perfect summer day in the 80s when I was studying music at York University, and a bunch of us went to the Molson Amphitheatre on Toronto’s waterfront. We lay on the grass just outside the cover of the roof watching Sonny, the blue of Lake Ontario in our vision. I remember one extended solo by Rollins, where the band dropped out and it was just him. Such a delightful squonking. Low register honks. Motifs broken up and tossed around. Time made into a salad. And all of it connected with Rollins’ characteristically playful intelligence. As Wallace Stevens says, “the poem of the mind in the act of finding/ What will suffice."

Ok, so gravitas didn’t seem to be explicitly there and the Coltrane-like bursting the seams, burning through the gates to another world. But there was meaning. Significance. And humility. And the sense of deeply being oneself. How? For Rollins his playing is often all about “the mind in the act of finding.” And what will suffice? Intelligence. Resilience. Creativity. Joy. A celebration of being. Of communication.

And the other thing I’ve come to understand in Rollins’ approach is ethics. Living through action and making choices. In a recent interview, Rollins says, “I’m just progressing through life, able to evolve now and to realize that to really live in a spiritual way I have to be an ethical person.”  In his music I hear this decision to live ethically. To be in the world. To choose one note after the other as an ethical act. To embrace life. To choose positivity, communication, joy. The life-force. To keep playing, performing. To be an old man and to St-Thomas-the-hell out of life.

It's an astounding thing.

So, all that’s true. I admire Rollins. He’s a giant of jazz and the saxophone and seems a profoundly great guy. And now, at almost ninety, he’s unable to play anymore, but is giving thoughtful and inspiring interviews and has a lengthy career to look back on. A “Saxophone Colossus” indeed. As I’ve gotten older, I have learned to consider practice, to consider action in the world as an ethical act. Unlike when I was younger, I wouldn’t only wander around, or loll about considering things, perhaps leaving a poetic trail like some Basho traipsing through the deep north that is Canada. Being there. For myself and for others. For my family, for example.

However, I couldn’t forget that thing that I heard in Coltrane. That sense of numinosity but also of penetrating humanity. That thing that I heard in the chanting of Hebrew prayer in my boyhood synagogue.  That was the Trane that I was chasin’ in tracks like “Alabama” and “A Love Supreme” and “My Favorite Things.” I’ve thought of it as “The Saxophonists’ Book of the Dead.” A guide to the most profound aspects of life. Or perhaps, it’d be more accurate to say, a map detailing the terrain, what was possible, what were the things to consider. So, I didn’t explore Coltrane’s infinity or his interstellar space. And I didn’t explore the infinity of Jewish theology, but rather gained an intimation of what my own world and identity might contain. What might be contained inside the blue velvet bandshell of my own mind.

FRedd sharon said…
This comment has been removed by a blog administrator.
8:39 PM

Mellisa said…
i want quickly recommend DR NCUBE for a Job well done by
curing me from the genital herpes disease that have be giving me sleepless night. if you want to contact him, Simply do that via email drncube03@gmail.com or
call/whatsapp +2348155227532