WRITING AS RHIZOME: CONNECTING POETRY AND FICTION WITH EVERYTHING

a talk given on Thursday, January 24 at Wilfrid Laurier University as part of my Edna Staebler Writer-in-Residency, Winter 2019. 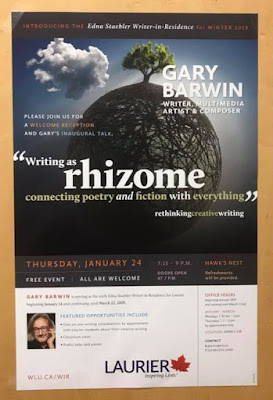 I sit down to write this talk on a snowy Monday, the sun bright, the air cold. I begin writing this talk like I begin most things. Without having any idea what to do. Without having any idea where I’m going. Also, I may have been too ambitious when I said I’d talk about connecting poetry and fiction to everything.
Everything?
Ok, so I won’t say anything about my dog. Except for just then.   But, in truth, beginning with knowing nothing and having only a vague sense of expectation and a willingness to explore is a good place to begin. It’s the state in which I begin most of my writing. And also, how I fill out most of my tax returns. Besides, everything is connected. It doesn’t really matter where you begin. As my son once said, the first five syllables of anything is the beginning of a haiku. And I do want to talk about how everything is connected. How everysome is elsecome thing.
But look how I just started from somewhere, from not knowing, from just beginning anyway, and here I am at the end of the first page, the first minute or two of speaking. And things are beginning to unfold. To suggest possibilities and directions. To paraphrase an old chestnut from Robert Frost:
` Two roads diverged in a yellow wood.
I took one.
It doesn’t matter which.

I’m not giving it back.

I do want to talk about writing from a place of not knowing, from a place of discovery, exploration, and play. But first let’s talk about eyebrows.
During my first years of being a middle school music teacher, students would sit in the back of the class and do this kind of salute thing, dragging single fingers across their eyebrows and then pointing them forward while saying “Connect. Connect.” It took me a while to figure out what they were doing. They were making fun of the fact that I have, what in the technical language of middle school is called “a unibrow.” My eyebrows are one. They connect. Me and Frida Kahlo. After I realized what my students meant by “connect,” I began greeting them with this unibrow salute and they would salute back at me.
Connect. Connect.
This shared and ridiculous act connected us. It was a kind of “knock-knock who’s there” call-and-response. Me and language. Me and my students. Kyrie eleison. Christe eleison.
So now let me say more about starting from nowhere, about trusting the process, trusting the language and your own response to it.  When I teach, I often tell my students, “The writing knows more than we do.” What I mean is that language is a vast repository, a great archive, a word hoard, a storehouse of accumulated knowledge and experience. Everyone who has ever used those words is there in the language. Just by virtue of being a speaker of the language, you have access to this knowledge. You have access to something much larger, much deeper than just yourself. You’re a tree connected to the rest of the forest by its roots. Or maybe you’re a leaf on a tree, connected to a twig, connected to a branch, connected to a trunk, connected to a system of roots, which connect you to the entire forest. And as the song goes, the green grass grows all around and around, the green grass grows all around. But you can see the forest because you’re a tree. You’re an antennae upside down in the ground.
I’m saying that language is its own internet. I’m saying that we should trust where our writing is taking us. Listen to the writing. To our own words. To the rhythms, the images, their associations. To how characters speak and what they say. Maybe you can feel it in your body as you write and—especially—as you read what you have written aloud.
I’m also saying that you should trust own language, your own particular place in the language. And maybe ask how it happened, how you became rooted in this particular place. Like a tree, as the poet John Terpstra says, you’re the expert on the place where you stand.
You don’t have to know what you’re doing. Or you don’t have to have a plan. Creative writing is an exploration. You can figure it out as you go along. You can start with a plan or a direction, but it can evolve. “The writing knows more than you do” and by listening to it, you often discover things that you didn’t expect, things that were much more subtle, interesting and complex than your original idea and yet somehow express what you didn't know you were thinking or feeling. It can lead you to greater and more emotionally rich writing. It’s good not to insist on what you thought the writing was going to be. It’s like a parent insisting that their kid be who they want the kid to be rather than allowing the kid to discover who they are. You’re not writing the poem or story that you wanted to write, but the one you are actually writing.
But I also want to make clear that at the same time that language isn’t to be trusted. Or at least, we shouldn’t trust its silvertongued inky-black duplicitous illusions to be more than the delightful play and ploy of signs and wonders. It’s the rope that isn’t there, yet that gives us enough rope to hang ourselves on our hope of being able to pull ourselves up by our own bootstraps, to throw a line between ourselves and our minds, our minds and others. Our othertongue. As much as language is a tool for discovery and empowerment, it can also be a tool of deception, suppression and silencing.
Interesting writing comes from our engagement with how the language pulls us and how we feel language’s pull and go along with it, or resist it, how we negotiate its energy. And by language, I don’t only mean words, grammar, phrases, sentences, paragraphs and so on, but images, stories, tropes, themes and structures as well how we interact with audience through publishing and what assumptions we make in general in our literary culture.
What if a tree falls in the forest and there’s no one around to hear? It’s a forest. There are other trees. Other living things. They hear. They can hear the sound of the trees that have fallen in the past, the anticipation of trees that will fall. And they can hear the sound of the network of trees itself. That’s language.
Writing is connected with everything.
Once I wrote a haiku for the late poet, David McFadden:

Why do we worry?
Every word on earth is
in the perfect place.

There was something about representing both ironically and yet at the same time earnestly this – hoped for, imagined – felicity of words and feeling. In my next poetry collection, I revised the haiku and it became:

Do why worry we?
Word every earth on is
in place perfect the

The play with the hoped for had become more self-referential. It had become a more compromised and contingent dance, something I saw in many of my favourite McFadden poems. I was trusting the language, but interrogating it more intensely. 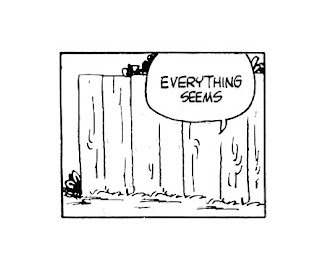 In this everything, turning and small being breathed in and out
by everyone with lungs during all the moments.

It’s a beautiful passage. We’re connected by breath. Everyone on earth shares the same air. It does, however, make me think of air mattresses. An air mattress as some kind of a book which holds the exhalations of whoever blew it up. A song or poem of the breath contained within the mattress. At least it’s better than that dream I had where a woman was sleeping in a waterbed and pulled back the sheets and there was  her ex-husband in scuba gear watching her from inside the waterbed.

What do we want? A time machine.
When do we want it? It doesn’t matter.

Finally, humour is about the pleasure of storytelling. The plot twists and delicious surprises. The opportunity to amuse and delight, to draw the reader in and lead them down the dramatic garden path. It enables the writer to confront difficult material, to give the reader a way in, and perhaps while entertaining them, rendering them open to a sneak attack of emotion or meaning. As Victor Coleman wrote of the work of Stuart Ross, “the message in the chuckle is a punch in the gut.”
Which reminds me. There was this sailor, Yankeleh.
He leaves a pair of pants to be repaired baym shnayder—at the tailor’s. After seven years, now covered in scars and tattoos, he returns to pick up his pants.
They weren’t ready.
“Gevalt!” Yankeleh exclaims. “It only took God himself six days to make the world. You’ve had six years!”
“What’s to say, now that the world is done?” the tailor replies. “So, nu, your pants are a tragedy . . . but at least we can talk about them.”
And that’s the point. We can talk together. About pants. About the world. About our lives. We tell our stories and the stories of those we know. We tell stories about the way the world is and the way the world could be. Sometimes we tell easy stories, sometimes difficult stories. But always we can tell them with compassion, intelligence, wit and humour.
To quote Aaron, my parrot narrator: “Ach, it’s a life. A wonder tale. And we try not to notice that—can we help it?—all the time our tucheses are plonked in the sitz-bath of story. You think, genug shoyn, enough already. But nu. Gey plotz. What can you do? You try not to let tsuris—your troubles— make you old.”
Which reminds me: A man goes to the theatre with his son.
“One adult and one child,” he says at the box office.
“That’s no child,” the ticket seller says. “He looks at least thirty.”
“I can help it that he worries?”

I believe that humour along with writing and storytelling, poetry and fiction, are some of humankind’s great technologies, some of our great tools. For investigation. For community. For keeping on keeping on. Our writing tells us that we’re in this together, everything is connected, and together we tell our stories from beginning to our end.

____________
Bits of this talk, guilelessly adapted (um, stolen) from:
Other Happinesses and Stephen Leacock Award Acceptance Speech
Posted by gary barwin at 5:03 PM