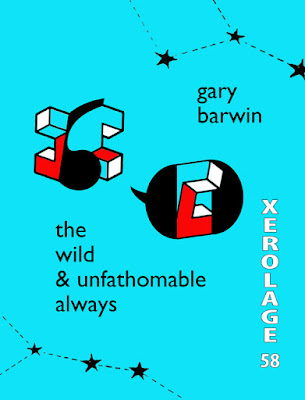 University of Ottawa Graduate student, Olivia Vanderwal asked me some questions about my visual poetry book the wild and unfathomable always for some coursework. I thought her questions were very interesting and I asked her if I could post her questions and my bloviating blatherations on my blog and she gave me permission.

OV: I was wondering if you could talk about some of the processes behind "the wild and unfathomable always," as both a conceptual and physical work. How did you first conceive of the project -- what thoughts or ideas led you toward visual poetry? What did the method or technique of production look like?

GB: I tend to imagine the world and its concepts as a metaphor for language. Not only do I imagine “grammar,” but more concretely, I imagine letter-like processes. Eg.: That’s a kind of m-behaviour. That’s w-ish in its relations. I imagine that the letters are the icons of entire ecosystems, systems of physics, or even of beliefs or conceptual systems and that what we see are just projections on the flat screen of our awareness, on the flat surface of the page.

I especially consider punctuation as representing the ineffable or at least the unsayable, the unsaid, or the inexpressible. Language but not language. Punctuation is an energy-field, a fundamental force like gravity or the electromagnetical force. Or being. Punctuation is the other. The strange beauty, the alphabets’s ostranenie. And if squinting at the infinite, the alphabet can seen to be a multidimensional thing of strange beauty itself. A physical phenomenon but also something noumenal or even numinous (and here, we’re not talking of the divine per se, but rather of the mysterious, the uncanny.)

I have been thinking about written language and its relation to impossible forms as well as constellations for a long time. And when these elements collide, they fracture both visual space, the integrity of the letterforms, as well as challenge the production of meaning. Or perhaps, I should say, produce multiple not easily parsed meanings. A network of signification. Signifiers as broken open and multidimensional and which exist beyond the usual limits of the semantic. Polysemic but also its inverse. A sign which exists in 22-dimensional space. Is it the signifier or the signified which has 22-dimensions?

OV: Your title frames the book in terms of time or infinity. What role does time/spacetime play in our understanding of language, or the way we (de)construct meaning from it?   There is much play in the images themselves with time and infinity. I consider that the 3-D illusion figures/impossible figures play with the perception of space and exist in the perceptual/conceptual interstices between time and space. They are, in their own way, sigils of infinity. They both break the “fourth wall” of visual and language illusion and its suspension of disbelief.

And of course, constellations mark a particular relation between space and time. At the distance that stars are from earth, the relation between space and time becomes apparent as we know that the starlight we see may be a record of something which doesn’t exist anymore.  The Hebrew letters, which appear through the text, also explore some of these ideas. Indeed, the traditional Jewish notion (particular in Jewish mysticism such as the Kaballah) of the Hebrew letters is that they have always existed. There are, in some way, the building blocks of the physical universe and are themselves creative forces (cf. stars.)

Not only do I see letterforms as constellations, I think of them as having traversed time and space. They carry information from different time and space. Also, I feel that language, like constellations, might seem connected and to offer a unified view or pattern are actually from very different time and places and just appear as one since they onto the platen of our consciousness. Language is, like the perceptual trickster figures of the images like a 3-D illusion. Like a Necker cube, we may interpret messages or text different depending on our expectations or perceptual predisposition. But that is also the great creative genius of language: that is can exist in a kind of quantum state between two ideas or ways of seeing. It can convey paradoxical or impossible meanings. Meaning which refuses to resolve into a single state, the rational directional state. (Perhaps the state of technocratic patriarchy?) It is always a mystery and resists having a one-dimensional or simple relation to time and space.

BTW the title is from Thoreau: “We do not associate the idea of antiquity with the ocean, nor wonder how it looked a thousand years ago, as we do of the land, for it was equally wild and unfathomable always. . . The ocean is a wilderness reaching around the globe, wilder than a Bengal jungle, and fuller of monsters, washing the very wharves of our cities and the gardens of our sea-side residences.”

OV: Could you speak toward the relationship between verbal and visual in the work? How, or to what extent, do both of these categories dialogue or "constellate" with one another?

GB: I’ve probably answered that in the biovating blatherations which appear above.

OV:  I'm just curious, what are those script-like symbols that appear in several of the images (ie. those that aren't punctuation)?

I think you mean the Hebrew letters. Though letters have powerful associations in Hebrew (particularly in Jewish mysticism) these particular letters were not exactly chosen for those meanings, but rather for their visual and associational resonance. The letter that has three arms (a little W-like) is a shin and is associated with the name of the divine.

BTW here’s a little video based on some of the images.