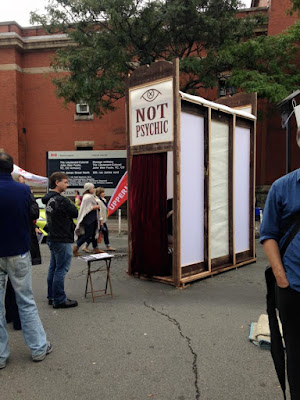 I recently participated as a “Non-Psychic” in Tor Lukasik-Foss’s I am Not a Psychic installation/ performance at Hamilton Ontario’s arts festival, Supercrawl.

What I did: I gazed deep into the forlorn Supercrawl souls of the participants, tapping the baleful stalactites of their sorrows and joys with the third eye Hammer of my preternatural charlatanry. Ok, what I really did was this:

I set up an old Underwood typewriter. I had a microphone which picked up keystrokes and carriage returns and sent the sound to live digital processing effects on my computer which were played by little speakers under the table. “I practice the forgotten art of Typomancy. I always use an Underwood because, Underwood, the dark roots know." The way I did the readings evolved over the sessions, but basically when someone arrived, I explained that I was a non-psychic but to set the non-psychic mood, I used typomancy to create a soundscape. I had them type their middle name if they had one and then the secret name they gave themselves, the name for their alter ego, or the one they wished they had. I said that the most significant aspect of a “real” psychic reading, the most profound communication, was the questions that people asked. Whether or not they believed or understood what the cards or the crystal, or the dots on the Dalmatian said about them it was the formulation and self-examination of the questions which was the important part. It revealed what the person wished for, hoped for, desired or feared. So, I explained, I’d asked questions.

The first question I asked was “If you could come back as anything – animal, object, force – what would that be. Some people named an animal, some the ocean, or a lens, or themselves (so they could continue to explore what it meant to live their life.) We discussed why they wanted to come back as this and what were the qualities of that animal or thing that appealed to them, that explained this part of their self.

Then I asked what they would come back as after that. We talked about how the self isn’t just one thing, but has different aspects and talked about what this new reincarnation revealed about them.

Then I asked them to imagine themselves in twenty years. What would this person counsel them to ask a psychic now? What should they know about, what should they think about? Ten or twenty years put them in the middle of their lives, careers, parenting etc. We spoke about the kinds of things that were important.

Then I asked them to imagine themselves as an old person, rocking on a digital porch with digital teeth and wearing a digital cardigan. I asked them to imagine themselves at the end of their lives looking back. What would they think it important for the current self to know? What would they ask the old person? What would the old person counsel that they ask now, given that they’d lived their life. We talked about what might be important in this long view– companionship, good actions, regrets, things they’d be proud of etc.

It was a strangely lovely and moving experience to talk with people about their future selves this afternoon in the rain. People were very earnest, trusting and open. As soon as I established the seriousness and thoughtfulness of the endeavour – even if we joked and weren’t somber – they really tried to think hard about my question and their lives. The meta quality – what would you tell yourself to ask fifty years from now – asking them try to imagine what they might be like and where they’d be as a very old person – was challenging to some. It was also quite often emotional.

One woman was quite sad. She pictured herself as an old woman, alone on a porch without anyone. I discussed her friend’s (who she came in the booth with) choice of animal to come back as: a whale. Her friend had suggested that she chose the whale because it lived in a pod and could communicate great distances, sometimes hearing songs 1000 mile away. So I suggested to the woman that maybe like a whale she has a network of friends that are all around to her even if very distant in time and space. The whale is aware of the presence of other whales all around it and even if they are not close, maybe there are significant presences. So maybe her friends that she has – some she speaks to only occasionally or even mostly on Facebook – are still important. Her “song” reaches 1000s of miles (in time and space) around her and she won’t be/isn’t alone on that porch. She was actually quite moved and consoled by this conversation. I found it very touching and lovely.

I’ve never participated in an art piece that directly engaged with peoples’ emotions in such an intimate way. I had imagined that it was the earnest articulation and discussion of the things that mattered to a person that was at the heart of their visit to a psychic, so it seemed to be with this “non-psychic” visit. The participants became invested in considering their selves and their lives and discussing it with me. I assumed the role of a counsellor, psychic, psychoanalyst, father confessor, seer, even though they knew that I was non of those. It was the kind of intimate transaction that one gets from art. One brings one’s self to an engagement with art that expects that you will do so, that believes that your feelings, thoughts, and self are part of the art and deserve to be considered with sensitivity, dignity, and thoughtfulness.

Thanks to Craig Conley, David Lee, and Lisa Pijuan-Nomura  for very helpful suggestions about the project and of course, to Tor Lukasik-Foss for inviting me to participate.

Astrologer Pandit ji is one such expert in Black magic removal in New York. You can approach Pandit ji for the best Black magic removal services. He is very famous in astrology prediction. Astrologer Pandit ji is a very lively and well-believed expert for Negative Energy Removal. He has studied astrological sciences and its affiliated subjects very deep. He is also an expert in Psychic approaches and spiritual healing. Hence his intervention will reverse all the bad effects and impact of black magic spells. He will help in establishing positive energy and positive effects.


I'm having very interesting information regarding Best Astrologer in Toronto!


I'm having very interesting information regarding Best Astrologer in Toronto, Psychic Reader in Toronto and How to Get Rid of Black Magic Spells?

Astrologer Pandit Vivek Ji is one of the best and Famous Indian Astrologer in Melbourne, Australia. He is a well-known astrologer who will make your life free from tensions. Many people believe in astrology. Most of them will take decisions by consulting famous astrologers. Pandit Vivek Ji knows the ins and outs about the different services of astrology some of them include such as Vedic, Love Issues, Black Magic Removal, Get Your Ex Love Back, Vashikaran, Marriage Problems, Business problems, Future Predictions, and Career Predictions.

how i got my Ex lover back after a divorced by the help of DR NCUBE a marriage/relationship specialist. contact him if you need help WHATSAPP DR NCUBE ON +2348155227532
his email is..... drncube03@gmail.com


he also have #herbs for
#hiv/aids
#cancerdisease
#fibroid
#diabetes

How i got my Ex lover back after a divorced by the help of DR NCUBE a marriage/relationship specialist. contact him if you need help WHATSAPP DR NCUBE ON +2348155227532
his email is..... drncube03@gmail.com....

Get Your Love Back Astrologer in Toronto