Glyphomancy: For Nico (After Mendax__2) 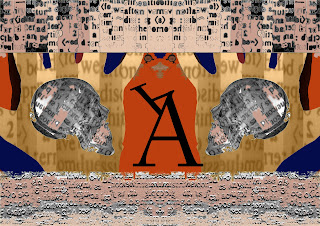 Language is ubiquitous in every habitat on Earth, growing in soil, acidic hot springs, radioactive waste, water, and deep in the Earth's crust, as well as in organic matter and the live bodies of plants and animals. There are typically 40 million languages in a gram of soil and a million language cells in a millilitre of fresh water; in all, there are approximately five nonillion (5×1030) languages on Earth, forming much of the world's glyphomass. Language has a wide range of shapes, ranging from spheres to rods and spirals. Languages are vital in recycling thought, with many steps in communication cycles depending on language, such as the fixation of glyphs from the atmosphere and satisfaction. However, most languages have not been characterized, and only about half of the phyla of language have species that can be grown in the laboratory. The study of language is known as poetry, a branch of glyphomancy.
Posted by gary barwin at 11:12 AM