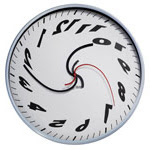 Jonathan Ball's latest book, Clockfire (Coach House) is "a suite of poetic blueprints for imaginary plays that would be impossible to produce."

The book is brilliant, and haunting in its metaphysical, magic realistic inversions, its fabulist fatalism and poetic invention, its play with the conventions of theatre and of  life, and, ultimately, its celebration of creativity and storytelling,

Ball has released it under a "Creative Commons Attribution--NonCommercial-ShareAlike 3.0 Unported Licence," with the idea that others could adapt these unproduceable plays, perhaps performing them, or rendering them in other media.

OK. I'll bite! Many of his "little theatres" are intensely directional. For example, one play ask for more and more lights to be turned on in the theatre, indeed the sun itself, until the audience is blinded. My immediate thought was to wonder what would happen if I inverted the plays -- if I turned the "Clockfire" backwards and played the plays in reverse...and perhaps inverted a few things.


1.
IF THE BURNS STILL THE SUN

The audience always complains: it is too hot, too bright, they have not paid to be blinded. They are wrong. The audience must be driven into the theatre. It will offer them their eyes.

If the sun still burns, extinguish it. The performance continues, light taken away from light.

The thirteenth, twelfth, the eleventh light.

Under no circumstances may the performance be stopped due to the danger and difficult of movement in the increasing darkness. Of course, it is getting darker. It is always getting darker. The tenth. Why should you have to supply the theatre with its own light? The ninth.

There must be no flickering, or other interruptions. Take great care when planning this piece to know how to navigate in the dark. The eighth light turns off.

All of these lights, aimed out into the audience. The seventh spotlight turns off, the sixth, and the fifth. Then the fourth. The third light joins these. The second spotlight burns out. A single spotlight targeting the audience dims and then all is invisible.

The sun has burned out. The director has found a new sun. It will take time for its light to reach Earth, meaning that for now one might look into the sky and see only night.

The play transpires during this time, performed by countless actors, the entire host of the planet’s life.

Who continue on, unaffected, unaware that the dark is ending. That a new world, with new terrors, is rushing toward them at the speed of light.

A NEW FUTURE
It is the audience’s turn to act. They leave home and arrive at the theatre just as the play is due to begin. The small troupe of actors listen, absorbing everything. The audience reveals the significant events of the next fifty years.

THERE IS NO APPLAUSE

Each night the audience returns to the theatre. To the ambulances and the shrieks. They take their seats then slit their own throats. The actors are horrified. They leave the stage. But night after night, they will return.
Email Post

Jonathan Ball said…
I'd love to see more of these, Gary. It doesn't look like it goes much better for most of these people in reverse!
11:32 AM