It's always a pleasure to discover an old poem. This is one that I wrote in bpNichol's class in first year undergrad, twentysomething years ago, clearly under bp's influence and the influence of my readings from the texts of indigenous people's from around the world. I was studying music at York University and the music department, in addition to having a strong new music, free improv, and South Indian program, was particularly slanted toward ethnomusicology.

the old in the arms of the new

the one blond eye

Image modified from photo in "Picturing the Museum", an online exhibition from the American Museum of Natural History. It represents a photographer preparing to take a picture of a horse.

Posted by gary barwin at 6:27 PM No comments:

Carpet of Undulating Tongues; Highway of the Shadowy Tongue

Here are two electroacoustic pieces that I created to go along with some video loops of Morpheal (aka Bob Ezergalis). Bob created these videos through some kind of interference pattern voodoo with multiple analogue signals and digital transformation. I think he also sacrificed a statuette of Col. Saunders in the burning parking lot of a local mall, but I'm not sure. There's only the remants of a white suit and chicken bones on a median.

One of the videos looks like a transforming Afghan/Middle Eastern rug, flickering in and out of coherence, flashing geometric shapes in a rich red. I thought of it as a Moroccodelic psychocarpet.

The music intended to go along with this is entitled "Carpet of Undulating Tongues." It is supposed to be fairly 'trippy' to accompany the trance-inducing video. The piece used samples from the duduk (a beautifully mournful Armenian woodwind instrument), drumming from Morocco and Japan, and samples of Hebrew Torah cantillation. Also speech samples, saxophone samples, and a few other things.

The second piece, "Highway of Shadowy Tongues" is music more upbeat and rhythmic. It is comprised of Pygmy music from central Africa, traffic and car and motorcycle sounds from highways and the street, Russian sacred chanting, Jussi Bjorling singing lieder with a piano, drumming sounds from around the world, and samples extracted from a Tadjikistan singer.

Highway of the Shadowy Tongue.mp3 1.4 Mb

Last Wednesday, BumpHEAD (the group comprising my son Ryan and I, together with Kerry Schooley) were over at Morpheal's studio recording music for his videos. These pieces of mine were inspired by that session. Nancy said, “Oh,
I want to play.
I want to run.
I want to stay because
the grass is so small
and Father cuts each blade
so beautifully.”

______________________________
The poem and picture were originally published as a serif of nottingham broadsheet in 1985. It was one of a series of pieces based on a learn to read "Dick & Jane"-type book which my mother-in-law used in school. The photo is of my wife, Beth, and her dog, Pepper on the lawn at their house in Dundas, Ontario. It dates from the late sixties. Around 1985 and for the next fifteen to twenty years, I made a series of broadsheets, chapbooks, and various ephemera for Stuart Ross and Nick Power's Meet-the-Presses and then for their Toronto Small Press Book Fair. I consider this, together with my studies at York University, to be a really important of my earlier writing life. I've been mesmerized by the story of severed feet washing up on the shores of BC. At last count, there have been six separate feet each in a large running shoe which have arrived over the last year.

From today's Globe, this amazing quote: "You can assume there are other lefts and rights floating out around there. There are a matching pair in the ocean – whether they show up or not is a different story."

Unlike that huge shipment of Nike running shoes that floated onto the Pacific shores of the U.S. which was the result of a cargo ship accident, authorities have, as yet, no explanation for these severed feet. 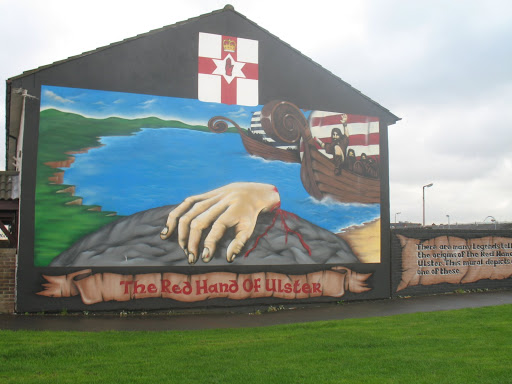 The symbol for Ulster, the northern Irish province is a red hand. The story goes that two kings were racing toward the island. Whomever touched the land first could claim it. One king cut off his right hand and threw it to shore. This is why the symbol is a red hand. Here's a slightly different version.

This doesn't explain the immigration of these individual feet involved in some transcontinental game of Twister.

The story begs for a short story, poem, or novel. A creative response of some kind. Who are (were) these people who lost feet? Who is cutting off the feet? Why? How? Is it a psychotic murderer? A cult?

I give my left to the sea

others give their right

waves arrive to console me

I look out at the ocean

the world is a vast blue organ

Niagara Falls Down while Poet Reads Downtown: a recording

The inimitable Jordan Fry hosted a reading at the new and very cool artspace in downtown Niagara Falls that's away from the spray and froth of the water.

Did I really do an impression of George W. Bush as a loose floorboard, Madonna as Bertrand Russell pretending to be a dog?

The huge space, called Four Triple Five has a cafe/ gallery, a stage for music, and, upstairs, an interesting little bookstore called The Book Nook where the reading took place. The 4555 is a reclaimed space in a very empty downtown. Evidently the building was vacant for more than twenty years. A number of interesting arts-related spaces have opened up in Niagara in the absence of more commercial ventures being interested in using these locations in an unprofitable, neglected part of town. There is a lonesome, melancholy yet hopeful charm to the long vacant streets and wide sidewalks, and to the curious and stalwart enterprises which populate this uncared for part of the Falls.

I read with Adam Getty and John Stiles.

Here is a recording of my part of the reading.

i before or after william tell Over at the Poetry Foundation's blog, Kenny Goldsmith is discussing intentionality and Christian Bok's rewriting / appropriation of Steve McCaffery's William Tell poem (the one with the two dots -- the two tittles -- over the i, the second dot, representing the apple.) The above visual poem is my response and below are my comments.

I'd rewrite Bok's rewriting of McCaffery's William Tell in the above way. The double dotted i is an icon, an idol for intentionality. It's clear that the apple is about to be felled from the head of the i, It is a Telling, a Willing. If one really wants to make a point over the i, to create an i whose tittlation tells of lack of intent then the McCafferyglyph should be as i've noted above.

My i does not reflect the presence of the Will, of the author, of the pointed i.
Posted by gary barwin at 11:18 PM No comments: Posted by gary barwin at 9:43 PM No comments: I was walking our dog, Dude, yesterday in the Cartwright Conservation Area, a place in Dundas where I very rarely come across other hikers. Because I’d been helping my son with a school presentation on the Kaballah, I’d been reading a book on the Jewish conception of God. I was thinking about a beautiful passage from Exodus quoted in the book that has Moses asking God to reveal Himself to him. God says that the vision would be too powerful and would burn Moses up. God places His hand over Moses and passes by him, lifting His hand in time for Moses to see His back.

This concept is pretty beguiling. God’s back. I wonder if it’s hairy. It’s like a blues song where the person sees the back of their lover on the way out. But, really, the idea that the back is less intense than the face, or the foot. I know it’s a metaphor, but there’s always this problem with the metaphor of the incorporeal God, the unknowable, the surpassing-definition God being represented by a body. It’d be fascinating if the Judeo-Christian notion of God represented God as a snail only. Or a thumb tack.

Representing the unknowable, the inconceivable as a single physical object is a paradox. I do prefer the idea of searching for patterns within a sacred text, as in some Kaballistic traditions. Or rather, conceiving of everything (absolutely everything in the range of possible universes and existence), whether physical or conceptual as representing every other thing. The universe as representing itself. The sum total of everything is everything, and as such one doesn’t need to have recourse to some notion of transcendent numinousity (numinous = ‘the wholly other’). Everything is the ‘wholly other’ of itself.

Even the notion of a single object, let's a say 'a table' is connected in so many ways to all other objects, it's hard to create a precise border to it. Table / trees / furniture /elbows / legs / chair / plate / flatness / object / wood / carpenter / undersidedness / squareness / graininess / inside-a-roomness / not-skyness / book.

Dude and I were walking along a path in the woods and there was a small but sudden sound. I looked up in time to see the back of a deer, the white blaze of its tail, running deeper into the forest.

I find it fascinating that the pronoun represent God is capitalized (never mind that it is gendered.) We talk about His mercy not his mercy. Should we represent people or things that we do not want to honour or respect with a different orthographic convention? Always lower case? Capitalizing the last letter: hitleR. Perhaps subscript: hitler. (I don't know how to represent the subscript 'h' here, but you get the idea.) Maybe we should have special fonts. Or like YHWH never actually pronounce the name. Or mispronounce it deliberately. This is a metaphorical use of the alphabet, of orthographic conventions, of morphemes. It's a metaphor on the level of the individual sememe.

My son Aaron has a big head of curly hair. “Aaron, don’t you want to shorten it?” “No, it’s like having a puppy on your head. All the girls want to pat it.”
Posted by gary barwin at 12:00 PM 1 comment:

Taddle Creek Summer issue is out. This issue also has an online audio version, with interesting work. Even the masthead is recorded.

This piece was recorded at the National Rhyme Institute Regional Rhyme Gland Sound Laboratory, Hamilton, May 11, 2008. Its electroacoustic score incorporates processed samples from Miles Davis to accompany the story which references Chet Baker.
Posted by gary barwin at 10:49 PM No comments: