On Names and Naming: How the Jews Sunk the Titanic


Several years ago, I had an interesting discussion with my son Ryan about names. We were talking about the Canadian Indigenous artist Lawrence Paul Yuxweluptun. He embraces his traditional last name but notes that his first two names are names from the residential school system. He only signs his paintings with his traditional name. Likewise, many people of African descent, leave their "slave" names, or at least, identify that the names have this origin. Dollar Brand, the South African musician, became Abdullah Ibrahim. Leroi Jones became Amiri Baraka.
Ryan was wondered about our Jewish last name. As I recall from Hebrew school, Jews of Eastern European origin only got last names sometime in the 19th century for census (thus tax) purposes by the non-Jewish government. Different names were given to different families according to status and money. Hence, Goldberg was worth more than Greenberg. Waxman was a occupational name. And Jews made lots of candles.

And there's that ancient joke:


—The Jews sunk the Titanic.

—No, they didn't. That was an iceberg.

—Greenberg, Goldberg, Iceberg. They're all the same.


The traditional way for Jews to be named is "Someone Son of Someone." Thus, Ryan Ben (son of) Gary, or, with our Hebrew names, Ronen Ben Gershon. Nowdays, it's usual, at least in reform congregations to include the mother's name. So: Ronen Ben Gershon v'Bela. (The v means 'and.')
Jewish last names, like many non-anglo names were also modified when Jews emigrated. 'Barwin' was "Borwein" or "Borweinis" in Lithuania where my grandfather was born. His family changed it to Barwin when they moved to South Africa. I still have Borwein relations. For example Jon Borwein. My maternal grandfather's last name was Zelikowitz, which became Zelikow when he emigrated to South Africa. Ryan remembered that Stuart Ross's family name was Razovsky which was Anglicized to Ross and then appeared on and in some of Stuart's books.
I have chosen to consider "Barwin" as an invented name, albeit one derived from my family's past. I consider that my grandfather changed it to reflect his new life of opportunity outside of the shettls of Europe. Perhaps I could see it as a concession to the dominant power and language of the time and place, however I'd prefer to consider it as part of a process of shaping a life and a person. (For more on the very interesting topic of Jewish emmigration to South Africa, check out Victor Barwin's — my grand-uncle or cousin, I'm not sure — book about it "Millionaires and Tatterdemalions" )
"Ryan" is obviously not a traditional Jewish name, though he was given it in memory of his great-grandmother whose name began with an "R" --Rita Barwin. It is traditional with Ashkenazi Jews to name children after dead relatives. It would be bad luck to name them after someone alive. (No Moshe Jr.'s for Jews.) My son Aaron Barwin is named after Aaron Barwin, my dad's dad. Once when we were at a funeral, Aaron (age 5) noticed that his great-grandfather's grave was nearby and ran and lay down with his arms crossed in front of the gravestone. It was very freaky for Beth and I to see him lying on a grave with his own name on it.

A cloudless day in the cemetery where we have gone for the funeral of an aunt. Our five-year-old, named after his late grandfather, wanders about the headstones, dragging his fingers along the streambeds of carved-out letters. He stumbles upon his own name inscribed above a small bed of grass. He lies down, crosses his arms, closes his eyes, and waits. In time, he becomes old. The wind carves his features smooth as river rock. Someone lifts him and places him on his grandfather’s headstone. We no longer remember the town where he was born.

I don't know what Ryan will do about his name. Perhaps he will change his name. Perhaps he will modify or stylize it in order to claim it for his own. bpNichol. e.e. cummings. Geof Huth. mIEKAL aND. Or, like Lawrence Paul Yuxweluptun, keep it as a sign of the complexity of his personal and cultural history. Maybe he'll be "the son formerly known as Ryan" and invent his own sign. (When Prince navigated away from "Prince," Bob Wiseman suggested that he would change his name to Prince, and then the name "Bob Wiseman" would be available for someone else to adopt. Basically, we could all move one name to the right.
What would it be like with a different name? Would I think differently about myself if I were John King? My late friend Kerry Schooley was a very big man. He wrote under the very funny pen name of "Slim Volumes," as a poet. He also wrote as "John Swan" for detective fiction.
Certainly the exploration of culture, identity, and naming is a powerful and unfolding topic for discovery.
A few years ago, when my son, Aaron, completely lost his temper, he would call me a "Bitch." This was convenient, since he is my son, and there exists a rather simple and pre-made retort, one with much precedent in popular culture, and available to me should I choose to invoke the fact that he is my male offspring.
Posted by gary barwin at 11:15 AM No comments:

On being a multifarious denizen in the Winnipeg Review. On being enthralled in Quill and Quire 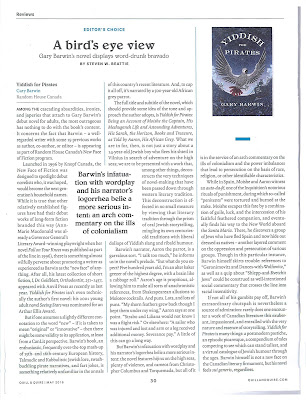 Very happy to have this review of the novel in Quill & Quire.

Rarely does one  encounter a work of Canadian literature this exuberant, impassioned, and enthralled with the very nature and essence of storytelling.


And I loved this sentence from Shawn Syms' column in The Winnipeg Review describing me. I've never been identified as a denizen of anywhere before, not to mention multifarious. Is that like nefarious squared?

This Globe & Mail review made me entirely verklempt! 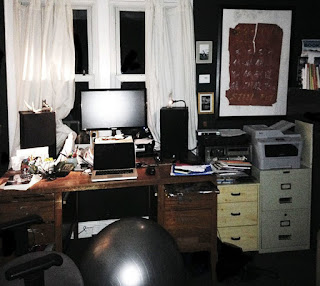 This Globe and Mail review of Yiddish for Pirates rendered me smobgacked. I was really delighted, overwhelmed really, by the kind words, of course, but especially by the fact that the reviewer, S. Bear Bergman really seemed to "get" the book, and indeed made some points which I hadn't quite considered or thought of in the way that he framed them. I found it really moving that he was engaged in this way.

Review: Gary Barwin’s Yiddish for Pirates is unlike anything else you’ll read this year.

The book received another review today, also, this one from the Winnipeg Free Press. Here is that one.

And finally for today, the writer/critic Jeanie MacFarlane has this great blog where she writes about things to do with the neighbourhood that we both live in, as well as about Hamilton, and lately, some amazing memoir-like writing.

She recently asked me to add to her series "Where I Write" where she asks other writers to answer that question. I guess I should have cleaned up my desk, but I wrote this piece in answer, speaking about our neighbourhood, city, and even, Facebook as a place where writing happens. Thanks for the opportunity, Jeanie. (And actually, I DID clean up my desk & yeah, I know...)


"This humorous, pun-laden twist on the classic adventure story which at its heart deals with the very serious issues of religious persecution and identity…" 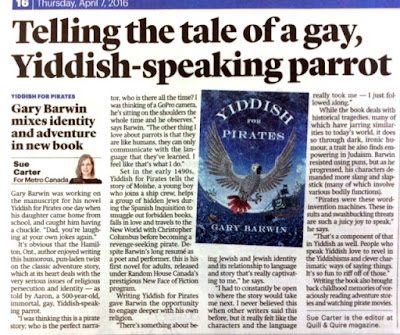 Posted by gary barwin at 5:31 PM No comments: 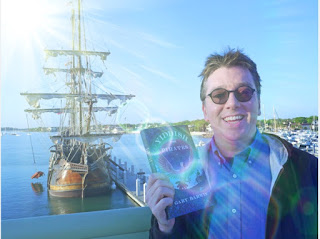 My friend and collaborator Craig Conley on receiving Yiddish for Pirates coincident with the arrival of this galleon. The world always offers curious and wondrous marvels as seen through the lens flare of Craig's eyes. 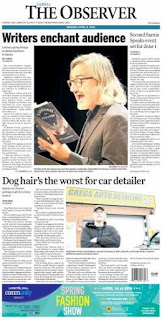 I read in Sarnia and made the front page of the local newspaper along with a probing article about the problematics of dog hair for car detailers. 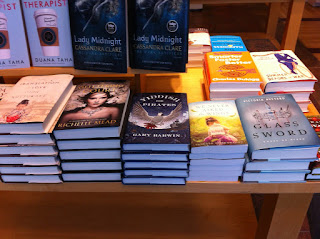 April 5 was the official publication date of my novel Here is a picture from thousands of miles away Victoria, B.C. that my brother Alan sent. 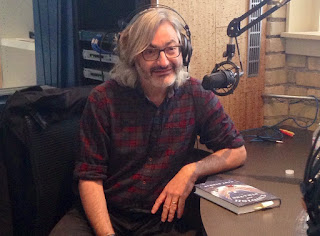 I did a great radio show on Sirius XM today. The Ward and Al show. They were lovely and we had a great talk about the book as well as a range of other things. 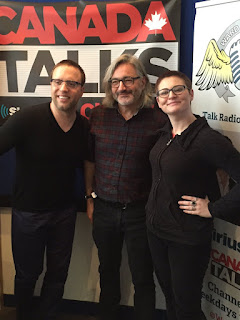 Here are the three of us, post show. Fun. 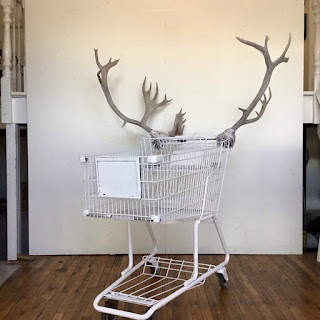 My art show with Lisa Pijuan-Nomura at the Hundred Dollar Gallery opens on Friday. The rest of the work is prints, but here is the one sculptural piece. 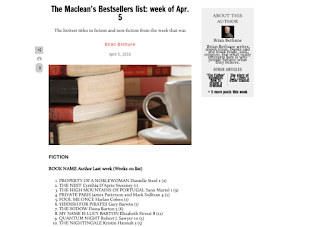 And—amazingly enough—on the day that it was first out in the world, the book was on the Macleans' best seller list! Number 6!

Over the last week, I read a few times from my not-even-released-yet novel Yiddish for Pirates (it comes out officially, tomorrow, April 5!) notably in two events arranged by independent bookstores in Sarnia and Uxbridge. Both events were with Yann Martel (Life of Pi, and just released, The High Mountains of Portugal.) I'd never met him and he turned out to be a fascinating and charming guy. I had quite a lot of time to chat with him as we took a limo (when you're Yann Martel you get a limo!) to the events and when we had dinner with the people from the bookstores. That was great and I'm really glad to have had the opportunity. And the events each had nearly 200 people in attendance who were extremely enthusiastic and engaged and bought books (and not just Yann's!—I was relieved there were some who lined up to have me sign also—I've been at events as a poet reading with a graphic novelist where he had a line-up of 300 and no-one, except my kind wife, came to my table. And she didn't even ask me to sign!)

What really struck me at these events was the vitality of the readership in these small communities. And the importance that these local bookstores (Blue Heron Books in Uxbridge and The Book Keeper in Sarnia) have in cultivating, maintaining and energizing these reading communities. These both were small independent bookstores with a handful of staff (but yet who regularly organize these large events.) Both were owned and run by very dynamic and knowledgable women who appeared to know everyone—the network of other booksellers, authors, and most especially, their customers and community.

This is perhaps something that isn't talked about enough. How local indie bookshops not only know books and know the tastes of their customers, but how they add to the community by participating in and organizing a host of community events and creating and supporting local initiatives—literary, cultural, educational, social, and more.

The Book Keeper event in Sarnia, for instance, raised money for the Organization for Lambton Literacy. I know my local Hamilton bookstores (Epic Books and Bryan Prince Bookseller) do a ton of things in the city. Every time I look around, there they are, involved in events, supporting community, schools, local writers, etc.

Indie bookstores make readers and writers connect and believe that writers and readers have a place in the community and that they add something positive to life in the city or town. That thinking and talking about ideas and literary is worthwhile, enjoyable, and fun. And that the whole shebang—reading, writing, thinking, talking and engaging—is an extremely positive and important endeavour.

So many indie bookstores punch far above their weight. They don't just sell widgets but books as well as that thing that isn't selling.

AND they are enthusiastic, hospitable, friendly and supportive to an author like me. I'm grateful as both a writer and a reader. As someone who buys a ton of books he reads. And a ton of books he does't get around to reading but buy anyway. I'm really glad that I'm going to be participating in the Authors for Indies day on April 30 (I'll be at Epic Books and Bryan Prince Bookseller in Hamilton) to celebrate indie booksellers and let everyone know—including them—how much important they are to me and to our community. 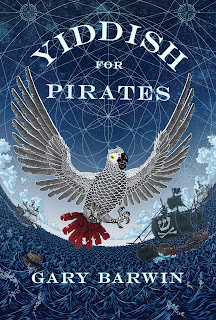