They were offered the choice between becoming kings or the couriers of kings. The way children would, they all wanted to be couriers. Therefore there are only couriers who hurry about the world, shouting to each other—since there are no kings—messages that have become meaningless. They would like to put an end to this miserable life of theirs but they dare not because of their oaths of service.

They are offered the choice between becoming trains or the smoke of trains. The way children would, they all want to be smoke. Therefore there is only smoke which floats above the tracks, from station to station & through the woods—and since there are no trains—life has become mysterious, theoretical, legendary. When they consider putting an end to this immaterial travel of theirs, they dare not, because of the timetables posted outside the stations and the clockmakers tinkering with their clocks.

While we're on the subject of that lovely word 'trainsmoke' (which is the title of the Edvard Munch painting above) here's a few lines from Tom Waits' astounding "Pony" from his Mule Variations CD. This song (again, a perfect blend of lyric, melody, arrangement, and performance) captures the heartbreaking longing, the regret, the sorrowful poetry of the world and of a lived life with a kind of hopeful bittersweetness.

I run my race with burnt face Jake
Gave him a Manzanita cross
I lived on nothin’
But dreams and train smoke
Somehow my watch and chain
got lost.

I wish I was home
in Evelyn's Kitchen
With old Gyp curled around my feet
Posted by gary barwin at 10:04 PM No comments:

In a Grade Six music class somewhere in Hamilton:

I'm speaking about sharps and flats, scales, and the piano keyboard.

A little boy of South Asian background: "Sir, you've shown us the black keys and the white keys, but where are the brown keys? Where are the Hindu notes?"
Posted by gary barwin at 5:00 PM 1 comment:

Ceiling Cat maded teh skiez An da Urfs: The Bible into Cat Pidgin

Translating the entire Bible into Cat Pidgin (as opposed to translating a pigeon into a cat.)

This monumental task is being done via a collaborative wiki based site. Very cool approach, yet remarkable in its phenomenal ridiculousness. I mean, Klingon would be different.

Here's the beginning of Genesis:

1 Oh hai. In teh beginnin Ceiling Cat maded teh skiez An da Urfs, but he did not eated dem.

2 Da Urfs no had shapez An haded dark face, An Ceiling Cat rode invisible bike over teh waterz.

3 At start, no has lyte. An Ceiling Cat sayz, i can haz lite? An lite wuz.

4 An Ceiling Cat sawed teh lite, to seez stuffs, An splitted teh lite from dark but taht wuz ok cuz kittehs can see in teh dark An not tripz over nethin.

5 An Ceiling Cat sayed light Day An dark no Day. It were FURST!!!1

*
The diaries of Franz Kafka We just came in from watching the eclipse of the moon. The paper said today that, even in the city, the "handsome rings of Saturn could be observed" in proximity to the moon. We were unable to observe them, though the moon was a beautiful terra cotta / apricot colour. Ryan said that if we lived near the stars he would buy a telescope.

Here's a draft of a poem I was working on at some time in the past:


1. people wait for their houses to be erased
a mouthful of birds
a beaten heart sandwich

2. I lie submerged
replace my tongue with a shark fin
I am a predator

3. beware shampoo of the night
and human suffering
I slice your red pomegranate insides

4. I try to go all Trojan and
leap out from a snow flake
but fall into the wrong library

5. we were unique
but evaporation, memory, lassitude

and we are gone
Posted by gary barwin at 9:57 PM No comments:

*
Beginning of a story that I was helping a student with today:

"The lamb yelped. It was shot by the sheriff. He was omniscient. He knew that he was going to shoot the animal."

This is the exercise that I gave him. He had to randomly select four words from the dictionary (opening it at random and plonking his finger down. He'd read the word and its definition.) He had to write a short paragraph-length story incorporating the four words.
Posted by gary barwin at 8:53 PM No comments:

My eldest son, Ryan, has been very ill with flu for the last four days. In addition to being very dizzy and puking like a television, he was experiencing strange visual and cognitive hallucinations. On Wednesday, when I first brought him back from school, he asked me to put on some Grateful Dead and give him a book of modern art to look at. He figured if he was feeling trippy, he might as well enjoy himself.

Finally, we took him to the hospital emergency last night as he was getting very dehydrated and the flu wasn't going away. We were there for about six hours. I'm happy to report he's feeling much better today and is downstairs in the basement concocting some kind of recording with glasses filled with water. His hymn to rehydration, I guess.

While Ryan and I were waiting, I began writing this series of little verbal/visual haiku. I took a break when Beth (his mom, my wife) got there and read to us from Thomas King's fantastic short story collection, "A Short History of Indians in Canada," but continued after, as the IV dripped.

The image is so small that you have to click on it to see it, though I do like the idea of nano-visual haiku.

It was one of those weeks: On the weekend, it was minus twenty or something and our furnace went out. It wasn't fixed until Monday night at which point we had a float in the basement. The next night, a pipe burst and we had to rip open drywall in the ceiling so that the plumber could repair it. By Wednesday, the furnace had broken down again. Then Ryan got sick. Thursday, the transmission went out on the car and that had to be fixed. Friday? I can't remember Friday, though I do remember slithering into bed with a bowl of rice pudding, a bottle of beer, and a DVD of The Maltese Falcon.
Posted by gary barwin at 1:13 PM No comments:

The Origin of Feet: Strange case of three right feet in running shoes washing up on BC Coast. "Running shoes float upside down, protecting the remains inside from birds, but leaving them open to the attention of fish and other water animals. Overall, the remains would survive longer in an upside-down shoe, he said."

Faith is Toast: Atheist Finds Big Bang in Piece of Toast
Posted by gary barwin at 11:22 AM No comments: 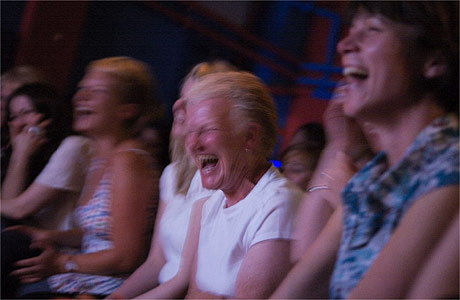 The Laugh Museum is looking for your laughter.

This is an open call for anyone who wishes to submit a short recording of laughter (and whatever chortles, guffaws, and miscellaneous snorting that may be considered as falling within the definition of laughter) to the Laugh Museum project. The sound files can be in any format (wav, mp3, etc.) The laughter should be an original recording made by the person submitting it of themselves or someone they know. Along with the file, I'd like the name (last name optional), age, location of the person laughing.and the date of the recording.

What are the recordings for:

1. They will be posted at The Laugh Museum website) as part of an international online museum of laughter.
2. They will be part of a multi-speaker installation project and accompanying electroacoustic composition.

Recordings of laughter can be submitted to laughmuseum@gmail.com

I'm looking forward to your laughter.

Gary Barwin
Posted by gary barwin at 2:52 PM No comments: Children break into the staff room to drink the black dregs of the teachers' coffee. This is repeated again and again; finally it can be calculated in advance. It becomes part of the curriculum: the futile stretching of the children's tongues, the attempts to reach, the exploration, the new worlds, the dark wonder.

-from the Franzlations project by Gary Barwin and Hugh Thomas

image: H on fallen H
Posted by gary barwin at 9:35 PM No comments:

"Anyway, the fascinating thing was that I read in National Geographic that there are more people alive now than have died in all of human history. In other words, if everyone wanted to play Hamlet at once, they couldn't, because there aren't enough skulls."

GARY BARWIN IS ONE OF THE GRAY BARDERS AT GREY BORDERS