The universe is a brambledom, for the scarification of ankles


The Torontoist recently posted an interview with me about my forthcoming The Porcupinity of the Stars. I really enjoy these kind of interviews. They provide me with an opportunity to clarify and articulate (even to myself) what I might be thinking and to share some of the process of creating and publishing a book and to share some of what I was trying to do with the book as well as the general excitement.

Also, I received a first review by Zach Hudson on the book which is not yet out. I do truly appreciate the thoughtful engagement and I'm very pleased to have someone read and think about the book even if I read it very differently and have different opinions about it. This is of course the life of a text. It goes out into the world and, like a third son in a folk tale, seeks its fortune by its own devices. I just have to trust that it was 'brought up right' and is able to take care of itself, whether before dragons, princesses, cliches, glass mountains, reviewers, or readers.
Posted by gary barwin at 11:38 AM No comments:


I have been researching pirates, pirate lore, and the history of ocean exploration in the Renaissance in preparation for a work of fiction that I am planning.

I've been reading various books on piracy and history, A Brief Account of the Destruction of the Indies by Bartolome de las Casas (1474-1566), Stevenson's Treasure Island, and Captain Blood by Rafael Sabatini. I've also been listening to the CD compilation "Rogue's Gallery: Pirate Ballads, Sea Songs, and Chanteys," which includes many contemporary artists' renditions of traditional songs.

De las Casas contemporaneous account of the genocide of the natives of the Caribbean contains many extraordinary passages of brutality told in remarkably vivid language. Mostly, the Spanish are committing the violence, there is, however, this passage describing a rare moment when the natives, with grim irony attack the Spanish:

for when they had taken some of them Prisoners (which was rarely) they bound them head and foot, laid them on the ground, and then pouring melted Gold down their Throats, cried out and called to them aloud in derision, yield, throw up thy Gold O Christian Vomit and spew out the Mettal which hath so inqinated and invenom’d both Body and Soul, that thath stain’d and infected thy mind with desires and contrivances, and thy hands with Commission of such matchless Enormities.


As I research and plan, various ideas for poetry spring up. Here is one such example.

SHAGGY DOG OF THE SEA

the sea is an aphorism
a drowning man that cannot see ocean for the waves
or more practically, the sky for water
a ship that passes by itself in memory only
how can the future find the past?

*
the sea has no surprise endings
and no beginnings
the sea dogs the sea dogs
waves turning twice, then collapsing on the sand

forgiveness forgives
an unknown island
something priceless hidden
beneath the sand

the horizon only horizon
the distance itself a kind of wave
Posted by gary barwin at 2:45 PM 3 comments:

The Person of the Cow 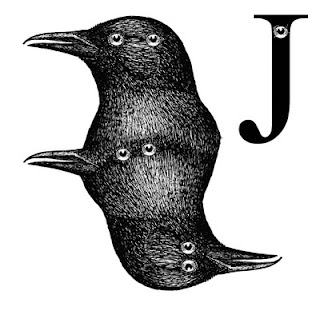 THE PERSON OF THE COW

O inside every crow is another crow
wondering how it ended up wearing
a crow as an overcoat of feathers
it is winter inside the crow
the shadow of tongues
fingers fondling the star-filled sky
the inside of the crow
a limitless crow
the inside of the cow
its single perfect life
Posted by gary barwin at 11:09 PM No comments: 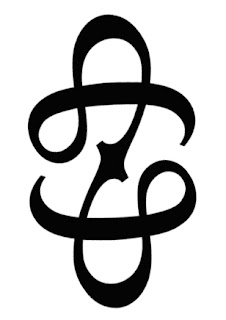 found on the road

rolled between then fingers

then thrown away
Posted by gary barwin at 12:51 AM No comments:

Can't tell the forest for its age

This is what I will look like when I’m old.
The forest.
At that age, you become a kind of geography.
Imagine a cloud.

I am on a mountain
and reach out
My hands go right through
When I’m old, I’ll be more like remembering.

Yeah, with parts that aren’t so clear.
Did you say pants?
I walk into the yard
sit on a deckchair and look up.

The sky has plenty.
What did you mean, ‘geography’?
Posted by gary barwin at 10:42 AM No comments:

"love that picks its own inversions, its sweet pushmi-pullu": a review of Servants of Dust: 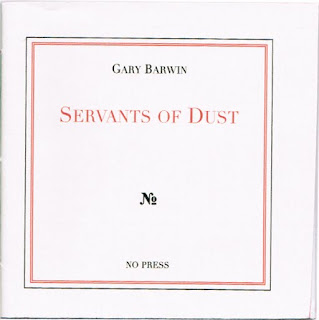 My chapbook, Servants of Dust--published by derek beaulieu's No Press (see his brand spanking new website)--was reviewed/discussed by Vanessa Place over at The Constant Critic.

Here's part of what she wrote:

"Gary Barwin’s Servants of Dust is a collection of the punctuation of Sonnets 1 through 20, rendered spatially (oh, Mallarmé!), so that Sonnet 18 (“Shall I compare thee to a summer’s day?”) becomes:

period
And in that way, one can see the play of punctuation across the page, fitting like the darling buds of May, or any buds, for that matter, Sonnet 2 being particularly dashing, though full of caught breaths, while Sonnet 20 is more dense, love’s own woolen thicket, pudding-proof of the rush and pause and interpolations that is not only love, but is love that picks its own inversions, its sweet pushmi-pullu."

[Note that the weird little light grey boxes aren't there in the original chapbook or in Vanessa's discussion, but exist here as visual testament to my ineptitude with blogger and HTML.]

Earlier on the blog, there's also a discussion of Rachel Zolf's Neighbour Procedure (Coach House) which I haven't yet got a hold of, but am anticipating greatly as I am a great admirer of her work. The section Shoot and Weep which was published as a chapbook by Nomados was fantastic.
Posted by gary barwin at 11:46 AM No comments:

Gabriel Gudding in Toronto: A Workshop...and a Reading ( with Stuart Ross & Gary Barwin) 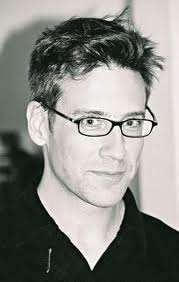 The always surprising Chicago poet Gabriel Gudding leads a poetry workshop in Toronto on August 12, 5:30 to 7:30 at the offices of Mansfield Press, 1 Wiltshire, Unit 204A (near Dupont & Symington).

To register for this rare opportunity, write hunkamooga [at] sympatico [dot] ca. Cost is $25. Preregistration is a must.

The workshop is co-presented by Meet the Presses and Mansfield Press.

LATER THAT EVENING: Gabe will also be reading later that evening with Gary Barwin and Stuart Ross at The Piston (Bloor & Ossington). Further details coming your way soon.

Gabriel Gudding is a poet and essayist. His books include A Defense of Poetry and Rhode Island Notebook. He teaches experimental poetry writing at Illinois State University, and his work has been translated into French, Vietnamese, Spanish and Danish.

This reading marks the launch of his chapbooks Congratulations on Being Here (Paper Kite Press) and Small Celestial Theater (Proper Tales Press).

"This is the first 21st-century classic." — Alan Sondheim

"This book is one of the best books of poetry I've seen for many years." — Stride Magazine

"Rhode Island Notebook is an act of kindness — to his daughter, to himself, even to poetry." — Cultural Society


Here's a link to Gabriel's reading of the title poem from A Defense of Poetry.

Sight. Take something two and make it one.

The sea. Take flesh and blood and make it wooden.

Parrot is dog of the shoulder. It closes its three lids and clings to the shore, its mind a sextant pointed at flight, its wings which were two, wooden and flightless as the ocean itself.

Beneath the surface, a strange glow, eyes in unexpected profusion.

With fewer fingers, even a simple stick is something.

It’s not that the world is round, but that it is large.
Posted by gary barwin at 2:37 PM No comments:

On Listening to Coleman Hawkins 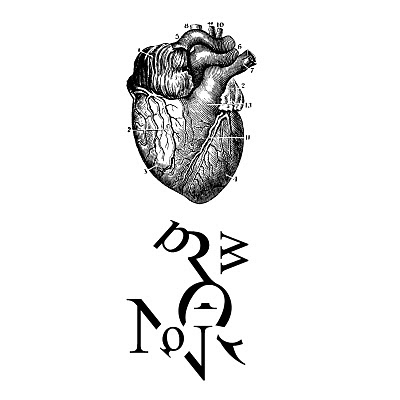 ON LISTENING TO COLEMAN HAWKINS

some think our ears
radiant fetuses

driving their tiny cars
on either side of the head

how do we know magnificence? 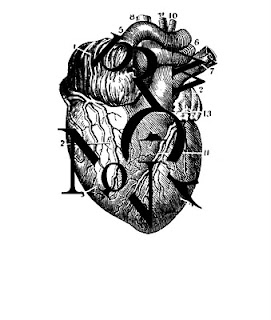 On the Crossing of Species: Bob de Graaf / On Proxmity

ON
THE CROSSING OF SPECIES
BY COMBINING ANIMALS AND OBJECTS,
TO
CREATE A NEW ORDER OF SPECIES,
By BOB DE GRAAF

ON PROXIMITY
I want to be close to things.
I could be happy.

I want to be close to things
sneak up to a desk.

Desk, you are wooden.
You are a thing.

Let me be close.

I put my hands out
to seem not afraid.

Let us hold each other’s breath

Twilight between the fingers
soon becomes dark
Posted by gary barwin at 11:26 PM No comments:

The Paleolithic Imagination, Clayton Eshleman and the Juniper Fuse, Nostagia for the Present


I’ve been reading Clayton Eshleman’s remarkable THE JUNIPER FUSE about “upper paleolithic imagination and the construction of the underworld.” Two things in chapter one which have me thinking.

One. At some point, people made a fantastic imaginative leap. They developed a ‘vision’ of the(ir) world. They were able to conceptualize the world as a concept. We assume that a squirrel just lives in the world and moves through it without a thought to it being something. These people made the leap to imagine the world.

Two. In discussing the imagery created by Paleolithic people found on the walls of caves,
Eshleman makes a remarkable point which comes from the writing of  James Hillman. We tend to conceive of this kind of imaginary, and indeed the imagery of dreams, as being a representation of the real, waking world, the world above ground. But, what if we conceive of dreams and this subterranean imagery as referring only to archetypes, myth, the subconscious, and an internal world? It is not a working out or an illustration of the aboveground, of the conscious, but instead is made to exist solely and wholely in the unconscious and mythic world. Here’s what Eshleman says: “Modern people have interpreted their dreams and treated them as a reflection of daylight and daytime activities, thus denying them an autonomous realm, an archetypal place that corresponds with a distinct mythic geography – in short, an underworld that is not merely a reflection or diminution of an empirical sense world.”

In the caves of  Mas d'Azil (La Grotte du Mas d'Azil) there was found a carving on the end of a spear of an ibex with a turd emerging from it, two birds sitting on the turd. Evidently this image was quite significant or popular. It is found carved in a number of other places.

Here's a poem about it:

an ibex bends
a turd emerges

this a message from
our ancestors 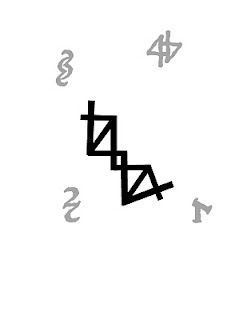