What is a Book?: The Frozen Pirate


I'm currently writing a novel that involves pirates and so I've been reading explorer, pirate and nautical narratives from the 16th to the 19th century. Some of the books include Defoe (The Life, Adventures, and Piracies of Captain Singleton), de las Casas (A Brief Account of the Destruction of the Indies), Stevenson (Treasure Island), Exquemelin (The Pirates of Panama), and The Frozen Pirate by W. Clark Russell.

Because it is the 21st century, much of my reading has been downloaded from Gutenberg.org and has been accomplished on my iPhone (using the Stanza app.) Some has been derived from Librivox.org which I often listen to while walking my dog. (I use the Audiobooks app for this.) There's a particularly great reading of Treasure Island replete with fantastic pirate and stuffy English gentlemen voices by  Adrian Praetzelis. He even multitracks his seadog singing of the "Yo ho ho and a bottle of rum!" choruses.

Archive.org has scanned reproductions of some old publications, for example, The Frozen Pirate by W. Clark Russell. I've only read/listened to the opening chapter, which is a brilliantly vivid description of a massive storm at sea which results in the ship being blown south to the Antarctic. Looking at the PDFs of the scans, I noted the reproduced blank pages. They were beautiful yellowed, stained and cloudy fields of paper. I thought that I might do something with these pages. The ultimate in erasure texts? A negative erasure text -- adding some text to the blankness? Perhaps my conceptual translation of the original would involve only blank pages. I hadn't decided. Another thing that was fascinating was that the PDFs of pages of text had a 'removable background' which meant that I could click and eliminate the yellowed pages and leave just the text. A strange ghoul of a book remained, a text printed upon the spirit of a pages only.

I downloaded the copy of the scanned book, thinking to begin seeing what I could do. Loading the pages into Photoshop, I discovered that, due to some kind of glitch, the blank pages turned into a grey-violet sea/storm wash of watercolour. I've posted one image above and one below. 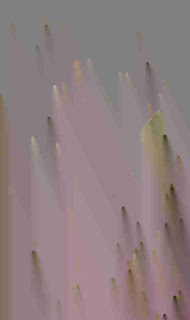 Below, I've also posted the first page. Copy and pasting from the PDF doesn't preserve the font or indeed the font size. I've posted the raw Photoshop of that, too, inverted in color for legibility., not only to give a sense of some of the writing, but also because I think it highlights how we receive text, these days.

Here is a 19th tale that I listen to via the crowd-sourced readings of Librivox, or read via a non-descript txt file on my iPhone that was downloaded from a free archival resource (Gutenberg.org). I also examine a scan of the produced published book on my laptop. Sometimes I attempt to migrate formats, platforms, or programs.

What is the book? Is it pixels? The text? The sum of its language and technology (whether print, book, alphabet, sound file, etc.)? Is the 'book' a vector of semantic forms? Of data? Is it a cultural vector to which, like barnacles, meaning accrues? A meme? Is the book some kind of frozen pirate, the said pirate having stolen fire from the word horde only to be frozen into fixed form? 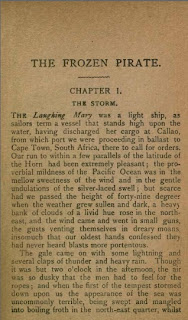 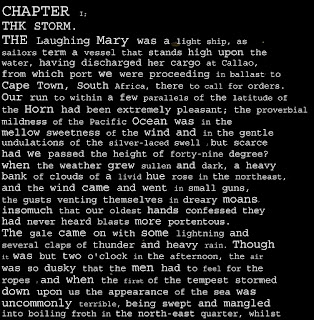 One thing for certain, though. All this playing around hasn't resulted in me finishing my book, whatever it turns out to be.
Email Post