My great-grandfather, dancing in Lithuania, before the war. 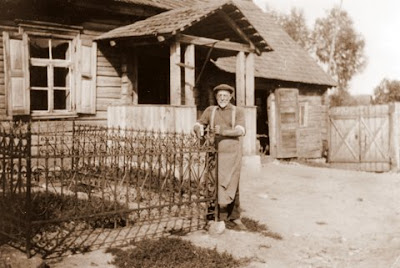 This is my great-grandfather standing beside some ornate ironwork he made in front of his house in Krekenova, Lithuania, before WWII. And below a passage from my novel-in-progress, Nothing the Same, Everything Haunted which folds in what I know about him into this little scene:

Motl lying in the dark, listening to the twitching around him, sleepers, rodents, restlessness. Outside, the defeated exhalation of the wind. What could it do? If it lifted the killers up, it’d have to put them down somewhere. Even the frontier was just the edge of someone else’s land.

A creak, likely a branch rubbing against another. The sound, vivid as scent, twitched in his mind. The scrape of a violin. A memory.

He was a small boy and someone—was it Hershel, the neighbour?—had brought a fiddle into the kitchen. Its husky voice like his grandmother’s, raspy and indomitable. But it rocked and swayed, whereas once she sat down, old Faigel’s jowls were the only thing that moved unless she were cheekpinching or sighing the pains of her ancient bones.
They’d moved the chairs aside, the shabbos table with its white cloth and braided loaves. The silverbright candlesticks burning low.

His father began to croak his own song. Ay yi yi.

“You can be led to water, but if you’re this hoarse, you were made by drink,” he laughed. Oy yoi yoi, he sang and rocked back and forth like a baby pram with the over-enthusiastic suspension of a new colt.
He was short and squat, with thick blacksmith arms and a white trimmed beard below his round spectacles which glinted in candlelight. He had cleaned the soot and ash and grime of the forge from his hands and arms and face and wore a fresh new apron as if he would spend his day of rest ostentatiously demonstrating his worklessness.
Lili lili lili li, he sang with the fiddler who sawed a roiling nigun, a wordless song, or rather one to be sung with only lilting syllables, each sound meaningless individually but taken together, able to carry whatever burden of joy or buoyant sorrow the singer wished.

Then his father reached out his foreshortened arms for his mother, sitting stolidly at the table beside her mother. “Gitl,” he said. “It’s shabbos. We must dance.”

“I look like a girl? A maideleh with a figure like a sapling, maybe?”
“You do to me. At least when there’s music.” Ay yi yi yi. And he took her hand in his and pulled her toward him. Nijinsky and Pavlova they were not. More like Wild Bill Hickok and Oliver Hardy, or Stan Laurel and Calamity Jane.

They torqued around the kitchen and for one moment, Motl saw what might be a smile wrestling his mother’s pursed lips.

Then—oy yoi yoi—his father reached for him and he was dancing between his parents as if between trees in a forest or between two bears.
He was giggling and his father kissed the crown of his head and his mother said, “One day you’ll have a family of your own.”

And Faigel, his grandmother, sighed. And the fiddler began another tune. Lili lili li, his father sang and Motl joined in, almost inaudibly, his thin voice cracking, a small bird being born from an egg.

unknown said…
Thanks for sharing this useful information.
Best Multispecialty Hospitals In Hyderabad

Mellisa said…
i want quickly recommend DR NCUBE for a Job well done by
curing me from the genital herpes disease that have be giving me sleepless night. if you want to contact him, Simply do that via email drncube03@gmail.com or
call/whatsapp +2348155227532